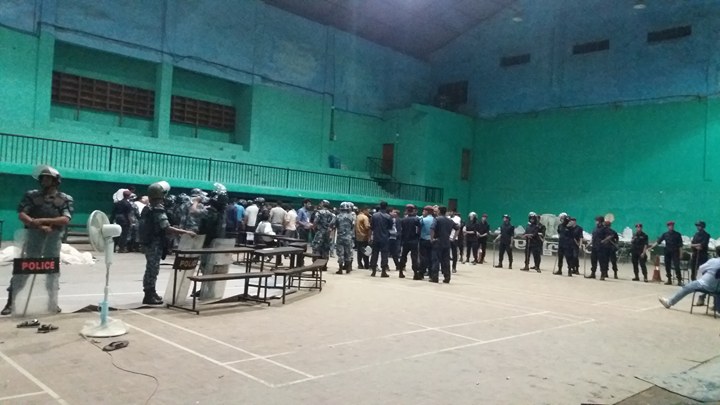 CHITWAN, June 1: The ballot papers which were sealed four days ago following the incident of tearing up ballot papers in Bharatpur Metropolitan City (BMC)-19 have been opened on Thursday.

A team of 46 individuals entered the counting center at the Covered Hall of BMC.

The torn ballot papers and those to be counted have been kept at the Covered Hall.

The investigation team will take stock of the torn ballot papers.

The representatives of the CPN (Maoist Center) had torn off the ballot papers while the vote counting was underway last Sunday night.

The investigation was launched after halting the vote counting.

Drawing a conclusion that the Maoist Center booth representative tore ballot papers at the counting center, the panel had submitted a report to the EC on Wednesday.

Chief Returning Officer Neupane told media persons that the incident took place while he was in the toilet.

Chitwan District Police Chief Dipak Thapa who was in the incident site informed that 4 to 5 ballot papers were torn.

As many as 2,860 votes were cast in Ward No. 19. According to the latest vote updates, Gyawali was taking lead with 733 votes.

By the time the ballot papers were torn, Gyawali had secured 41, 641 votes while rival Dahal was trailing with 40, 908 votes.

The Maoist Center has been demanding re-polling in Ward No. 19 after the incident. On the other hand, UML has been saying that the incident was intentionally orchestrated after Prime Minister Pushpa Kamal  Dahal’s daughter’s defeat was likely. UML has been disrupting the House meeting due to the same reason.

CHITWAN, July 17: Although 50 days have elapsed since the ballot papers with votes of Bharatpur Metropolitan City-19 have been... Read More...