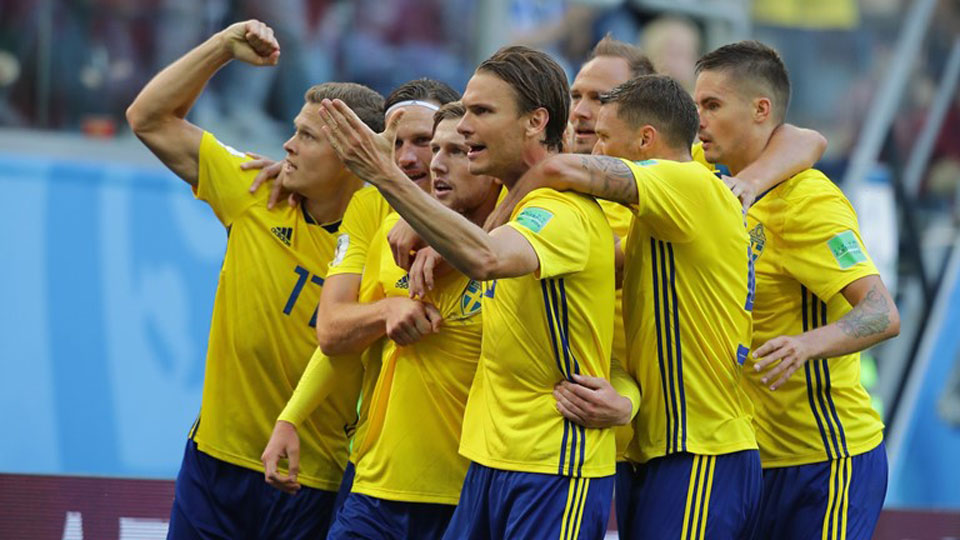 ST PETERSBURG, July 3: A deflected shot from Emil Forsberg gave Sweden a 1-0 victory over Switzerland in a scrappy round of 16 match on Tuesday, sending the Swedes through to the World Cup quarter-finals for the first time in 24 years.

A meeting with either Colombia or England awaits Janne Andersson’s side in the next round, but judging by the fare they served up in St Petersburg, neither of their potential opponents will lose sleep over the prospect of facing the limited Swedish attack.

Both teams were wasteful in possession and guilty of the sort of poor finishing and unimaginative midfield play that had boos and whistles ringing around the St Petersburg stadium from as early as the 25th minute.

Switzerland came into the match as the side with arguably the greater wealth of attacking talent, but their four shots on target over the 90 minutes told its own story.

Sweden had one attempt fewer on target, with the only difference being that one effort took a heavy deflection and wrong-footed Swiss goalkeeper Yann Sommer to send the Swedes into the next round.

“It’s the biggest goal of my career, one of the biggest moments in my career too. To experience this, to fire Sweden into a quarter-finals together with this group, it feels fantastic,” said Forsberg.

The Swedes were happy to pack midfield as they have done for the entire tournament and shepherd the Swiss down the wings, surrendering possession while looking to pinch a goal on the counter.

Marcus Berg forced a fine save from Sommer in the 27th minute and Albin Ekdal squandered an excellent chance when he volleyed over the bar from 12 metres after getting on the end of a cross from Mikael Lustig.

At the other end, Blerim Dzemaili wasted Switzerland’s best chance when he fired over from 12 metres, while Xherdan Shaqiri had an awful day, sending long balls from the wing sailing over the heads of his team mates with alarming regularity.

The teams went into the interval goalless and the second half started in a similarly stultifying manner, with the game looking like it was inching inevitably towards extra time and potentially a penalty shootout.

STROKE OF FORTUNE
Even the goal had a fair bit of fortune about it.

Forsberg’s 66th-minute shot was directed straight at Sommer until Manuel Akanji stuck out a foot and deflected it past his stranded keeper.

“(Forsberg) has developed in terms of the holistic approach to his game,” Andersson said of his goalscorer. “Even if he doesn’t succeed in every part of his game, he does very well.”

That was a fair assessment of Forsberg’s contribution before and after his goal, with the RB Leipzig midfielder unable to bring any sort of influence to bear for large parts of the match.

Andersson, however, is not unduly troubled by his team’s lack of creativity.

“We know that we’re a good team, we’ve earned our successes. We know how we’ve got this far,” the coach added. “What other teams and countries think about that, you’ll have to ask them.”

Switzerland sparked into life after going behind, but Sweden defended stoutly, making 33 clearances and nine blocks in total, while completing fewer than half the number of passes that their opponents did.

They broke through the Swiss cordon deep into extra time when the substitute Martin Olsson was released into space and brought down by Michael Lang just outside the box.

The referee gave Lang a red card and at first awarded a penalty to the Swedes, but changed his mind after consulting the video assistant referee (VAR) and instead awarded a free kick.

“We’re sorely disappointed, we wanted to do more,” said Swiss coach Vladimir Petkovic. “We also congratulate the Swedish team. They have done precisely what they are very good at and that was enough to beat us.

“We should have done things better but we weren’t good enough to win the match.”

SAMARA, July 2: Brazil roared in the World Cup quarter-finals with a 2-0 victory over Mexico on Monday as Neymar shone... Read More...

What we saw at Teku Hospital (photo feature)
21 hours ago
Oppn parties fail to secure majority seats in parliament to form new govt, Oli likely to be reappointed as new PM
18 hours ago

What we saw at Teku Hospital (photo feature)
21 hours ago