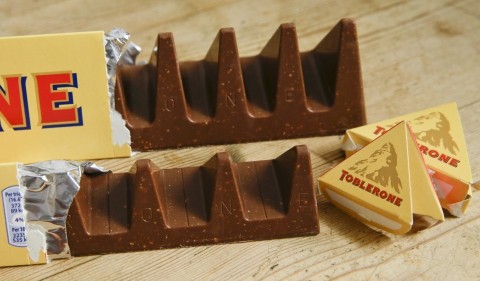 A member of the Scottish Parliament from the Scottish National Party Colin Beattie, has put forward a motion calling for the British government to investigate and rectify an unorthodox issue: the weight of Toblerone bars.

The iconic chocolate bar, known for its triangular shape, became the center of political discussion in Britain last week after news spread that some versions would have wider spaces between the peaks in a bid to lower the bars’ weight.

In his motion, Beattie linked the change to Britain’s recent vote to leave the European Union, suggesting:

“That the Parliament notes with concern Mondelez International’s recent decision to widen the gaps between the segments of the iconic Swiss chocolate bar, Toblerone, in the UK; understands that this was made in order to allay rising costs for numerous ingredients; believes that this is emblematic of the devastating consequences that Brexit could bring; offers its condolences to those mourning this change to the bar; calls on the UK Government to take speedy action to rectify the change, but wishes the company the best possible success with the lighter bar.”

In a post on Facebook in October, Toblerone’s producers had acknowledged that some bars would be downsized because of “higher costs for numerous ingredients.” However, Mondelez executives told the Wall Street Journal on Monday that the change had been planned long before the June Brexit vote and was not related.

According to the BBC, Beattie’s motion sparked a snack-related debate that included numerous puns.

“Given the grief Mr. Beattie is suffering over the scaling down of Toblerone, the Scottish Conservatives pledge today to buy him some good Scots chocolate, like a pack of Tunnock’s tea cakes, which — regardless of Brexit — remain as delicious and substantial as always,” responded Murdo Fraser, a lawmaker from Britain’s ruling Conservative Party.

Notwithstanding the levity of the Toblerone situation, the price of popular goods in a post-Brexit Britain has become a serious issue, with the devalued British pound prompting some companies to raise prices. BuzzFeed recently published a list of items that have become more expensive since the vote, including the stereotypical British staples Marmite, Walkers Crisps and Typhoo tea.

Many social media users have suggested that the new design could be linked to Britain’s vote to exit the European Union, or Brexit.

“Why did the government force Dr. KC to a hunger strike when it eventually had to back down?”