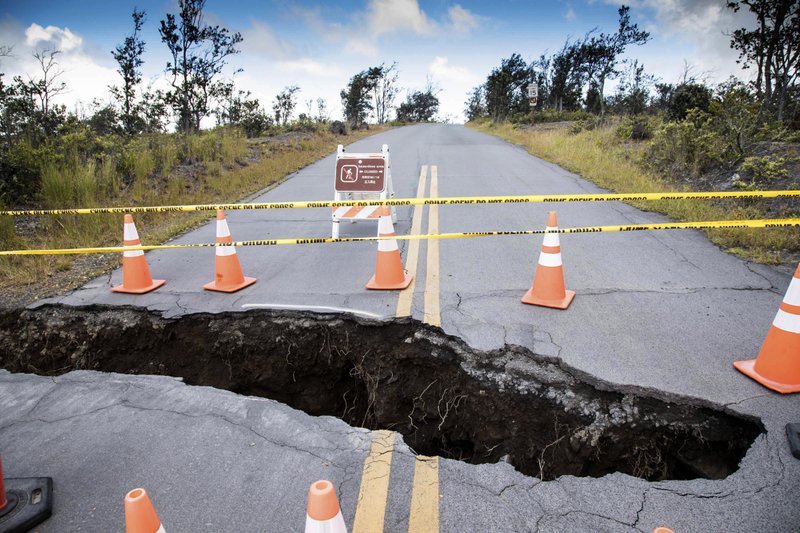 This photo provided by the National Park Service shows a large sinkhole at the Kilauea Overlook intersection inside Hawaii Volcanoes National Park in Hawaii on Friday, Aug. 17, 2018. Slowing activity at Hawaii’s Kilauea volcano is prompting scientists to downgrade their alert level for the mountain. (Janice Wei/National Park Service via AP

HONOLULU, Aug 18: Slowing activity at Hawaii’s Kilauea volcano has prompted scientists on Friday to downgrade their alert level for the mountain.

The U.S. Geological Survey issued a “watch” for Kilauea’s ground hazards, down from a “warning.”

But scientists say this doesn’t mean the eruption, which has destroyed more than 700 homes since May, is over. Kilauea has paused for days, weeks and even months during previous eruptions.

Lava mostly stopped flowing on Aug. 6. There’s a crusted-over lava pond inside a fissure cone and just a few spots where lava is entering the ocean.

The volcano’s summit hasn’t collapsed since Aug. 2. Sulfur dioxide emissions are the lowest they’ve been since 2007.

The agency has maintained a “warning” alert for Kilauea since May 3, when cracks began shooting lava out of the ground in the Big Island’s Leilani Estates neighborhood.

Hawaii Volcanoes National Park, meanwhile, said it was taking advantage of the lull to assess damage to the park.

The damage assessment produced by specialized team will provide the foundation of the park’s recovery plan, the National Park Service said.

Cindy Orlando, the park superintendent, said the agency is exploring short-term repairs to safely reopen at least part of the park.

“The science informs the decisions we make,” she said.

But the park has been closed since May because of the dangers posed by the eruption. That’s hurt the island’s tourism-dependent economy. The number of travelers to the island dropped 4.8 percent in June from the same month last year.