Schools closed in Rukum as children head to uplands 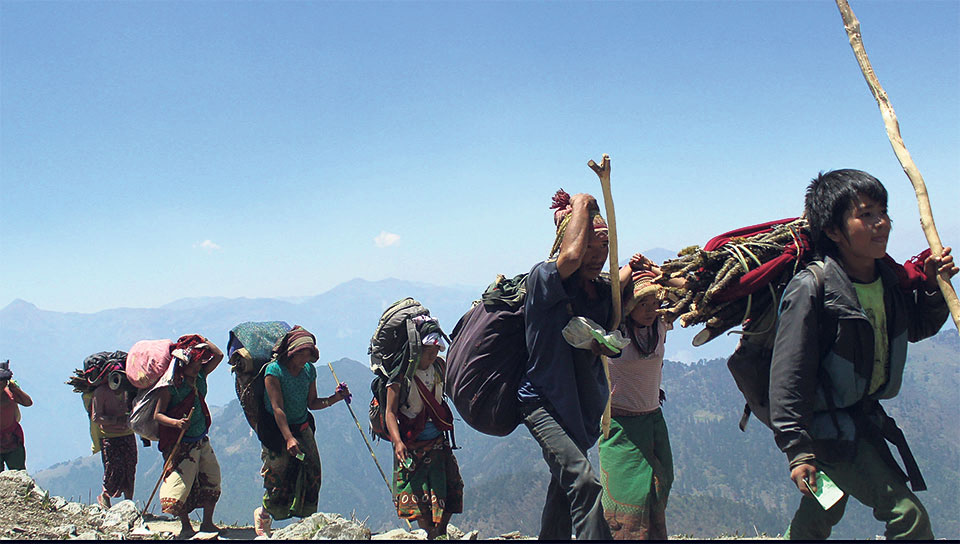 Villagers head on to highlands to pick yarsa in Rukum in this file photo.

RUKUM, May 6: With the beginning of ‘Yarsha season’, schools in the eastern part of Rukum have announced vacation. They will resume classes only after a month when locals will be get home after collecting yarsa gumba.

“That is why the schools are going to be closed. They have sent us notice,” said Chief District Officer Bhupendra Adhikari. “Actually, it is like a carnival. Yarsha season has a lot of importance among the local community. It is part of the local economy, culture, entertainment,” he added. The schools accommodate this vacation by calling off the monsoon holidays, he said while adding that it is meaningless to keep the school open during Yarsa picking season.

“Even if we open schools during this season, who would come? No one can afford to stay at home the Yarsa season It is a very competitive season where in all families try their best to make the most of the season,” said Bhupendra Man, a school teacher while informing that he too would be joining his family in the highlands to pick the precious herbs.

He further added that during the season even the elderly people do not like to stay at home and instead travel to high lands to pick yarsa because of its high value for running the local economy.

“Presently it is that part of the year, where, if luck favors, you can make a lot of money. So, as long as they can make the journey, none of the family members stay at home,” he said adding that earnings made by a family during the season are a major contributor to the local economy.
Teachers claim that children absolutely love to go to pick yarsha. In fact, they are very much engrossed in planning journey months early than the vacation starts.

“In this part of the world, we have limited things to do. Picking yarsha is really a much awaited thing to do, both for money and for the journey itself,” Man stated. “It is not an easy task, but children really get excited about it,” he added.

His eighth grader student Rabi Sharma nods in affirmation. According to him, children actually have pressure of picking as much yarsha as they can.

“It gives us money. We sell that right there on the spot to traders. We have to pick, clean it and then sell it to traders,” he informed.

Sharma has been to Yarsha spot several times. He was only eight when he set for the journey for the first time. “Even at that time, our school was closed. We were many kids in the journey. I went with my family,” he reminisced.

Children often join the journey from very early age. Even those who are toddlers or need babysitters join in the family’s journey. “It is not possible to leave them at home since mothers also head on to pick yarsa. So, during the yarsa season, you will find people of every age heading to the highlands,” Sharma stated.

‘Buki’ is a popular word in Rukum. They call it going to ‘Buki’ as they go for yarsha trip. ‘And none wants to miss Buki. “Last time, I made the most among my friends. I was lucky, there were more yarsha,” the boy said excitedly.

But, the journey to and fro the destination is not easy. One has to arrange everything from food to clothes. Cattle have to be managed back home. Many things to be prepared before heading on to the journey.

“It is like a very long vacation and there are many things that a family has to arrange for before heading on to the journey. Among other things, they have to prepare food for the family for a month, Along with that they also have to take care of arrangements for rain or cold,” Man narrated. “But the whole things make it a very memorable trip.”

Man does not even have a count how many times he has been on the yarsha trips. ‘However, the money earned is all gone’.

“It’s not that I did not earn enough. I did. Then, it does not last. But, many people here earn a living for their family by collecting yarsa, that’s a great thing,” he stated.

Meanwhile, another local Barjit Gharti said that the government must make even better arrangements for Yarsha trips. “There must be much better security provisions. Everyone is there in the trip, from children to elderly people. Some fatalities have also happened in the past,” he said. “But what to do, it is an annual opportunity to earn money for many here,” he added.

Yarsha price varies from trader to trader. Gharti last time sold one yarsha for Rs 1,000. “But they resell that in much higher price,” he stated. “A family generally earns between Rs 50,000 to half a million,” he added.

District Education Officer, Karna Bahadur Kuwar, stated that the office takes note of the leave the school have announced for yarsha factor and will monitor whether the classes would be resumed properly later. “Our concern is that they must complete course, studies should not be hampered. They adjust this holiday with other vacations, but our concern is that the school must complete the syllabus,” he said.

DOLPA, Nov 9: All the schools in the higher reaches of Dolpa district are closed for six months as the... Read More...