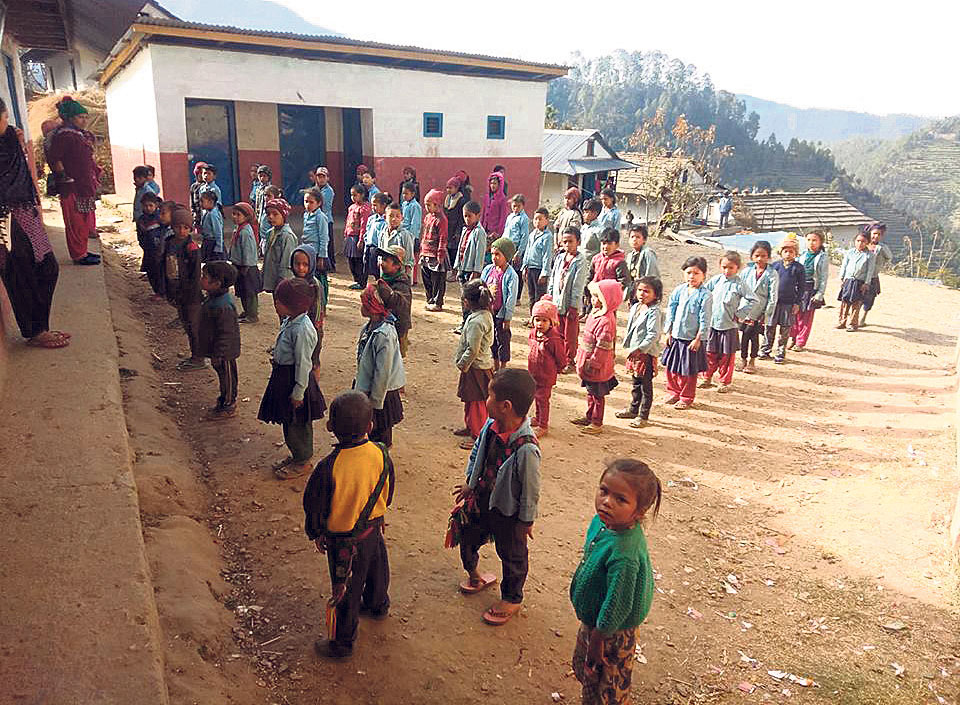 Students of Janapriya Primary School of Dhawang of Rolpa attend morning assembly in the school premises in this recent photo. Photo: Dinesh Subedi/Republica

ROLPA, Dec 17: One hundred and sixteen students had enrolled at the Janapriya Primary School of Dhawang in Rolpa at the start of this academic year. Nowadays no more than 60 students come to the school. School administration says that the rest of the students have dropped out. As most of the students don’t come to school on time, during morning prayers, the number of students present is even lesser. The principal of the school, Durga Bahadur Pun, says that the trend in his school actually reflects the common scenario across all the schools in Rolpa.

“Children are not very serious about studies, nor are their parents eager to send them to schools. As such the dropout rate is alarming,” he said. “The situation that you see in our school is not just limited to our school. Most of the community schools in the district have the same story to tell.”

There is no exact figure of how many students are out of school in Rolpa. Even the district education office has not kept it. However, Pun assumes that it is very high.

“We record the number of students that enroll at the start of academic session. But if they stop coming to school, it is not recorded as a dropout. As such data related to the number of dropout students are not available,” he elaborates.

Children from poor families, who are often enrolled in community schools, are generally seen contributing labor at construction sites. ‘They help their families earn more’.

“Once they reach eight or 10-years of age, they are considered capable of working with their parents. And for the families which have been hard hit by poverty, earning a livelihood is a pressing choice than to continuing school. So, our children often end up being labor,” Pun lamented.

However, the economy alone is not the reason why children and parents undermine education. It is also the quality of education and the way student are graded. According to a primary grader at Gurudaya Primary School, Shanti Wali, there is no need to go to school as ‘she will pass anyway’.

“We have heard that we won’t fail due to the grade teaching. No matter how we perform, we will go to the upper standard,” Wali giggled. “Our teachers do not come to school either. They are not regular,” she added.

Pun admits the lack of monitoring in public schools. The local government does not care, he pointed out. “Nobody cares actually. All the stakeholders have to take the blame. Parents are not aware, there are not enough teachers and resources at school, and the primary thing is the local government is not able to check things,” Pun said.

According to Wali, there are no subject teachers at her school. The students are extremely weak in English and Mathematics. “But the relief is, we will be upgraded to the higher level, we won’t fail.”

Child marriage is another factor behind the grim educational status. No sooner than children reach their early teenage, some girls elope with boys or parents themselves arrange their marriage. “Early marriage is a common practice here. They drop out of school before they reach fourth or fifth grade and they get married after a year or two,” the principal Pun said. “If anyone is still unmarried by the age of 20, he or she is looked upon as an odd person,” he added.

Also according to Tirtha Gharti, a local school teacher, child marriage has taken a toll on students’ education. Early marriage means early motherhood which means the end of formal education for a woman. “Both due to the practice of working since childhood and early marriage, children in this region remain out of school. Child marriage is still very common,” she said.

The problem of uterine prolapse among women is very common in Rolpa. Childbirth at a very young age and delivering one after another baby in short time periods affects the health of the women and the children. And this ultimately leaves the family with no option but to compromise in several things in life including good education of children.

“This is a vicious cycle of poverty. When youths become parents in early age, they do not become capable of ensuring good education and health of their children either. And this is happening here since long. We have to break this cycle,” Gharti states. She added that employment and awareness are two instant needs in the region. Until and unless the issues are addressed right away, generations to come will suffer, she warns.

121 students to miss SEE in Rolpa