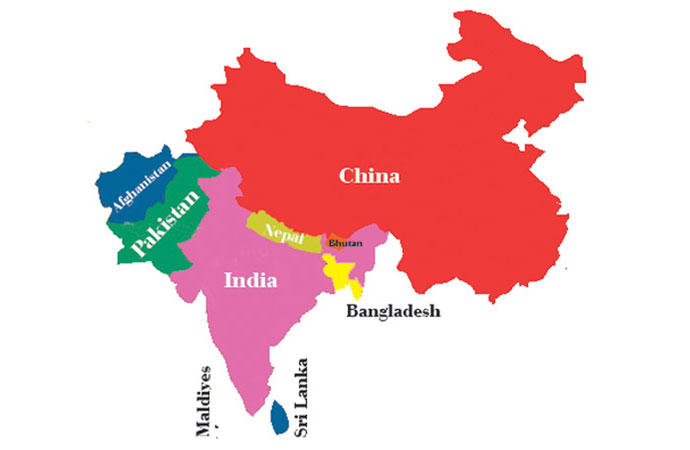 The author studied at Peking University and taught International Relations at the Kathmandu School of Law, Nepal. He currently lives in Texas, USA.
news@myrepublica.com

South Asia was divided while responding to Pelosi's Taiwan visit. Pakistan and Afghanistan followed the Chinese standpoint. Nepal, Bangladesh, and Sri Lanka reiterated their one-China policy and leveraged it to attain their interests but India and the Maldives opposed China to reiterate their policy.

On August 2, a high-stake Nancy Pelosi’s stopover in Taiwan and the Chinese retort through military and diplomatic drills stirred global politics. South Asia, the Chinese neighborhood comprising India, Pakistan, Bangladesh, Nepal, the Maldives, Afghanistan, Bhutan, and Sri Lanka swirled in the narratives between China and the United States. China expected coherence and reiteration of one China from this neighborhood. But, this region remained divided and China’s diplomacy flunked in India, a regional power, to reiterate its recognized one-China policy.

Bhutan was a single silent South Asian nation after Pelosi’s Taiwan visit because it does not have a diplomatic relationship with China.

Chinese diplomacy was of utmost productivity in Afghanistan and Pakistan. Pakistan reiterated its commitment to the one-China policy on the same day through an official statement. The statement defended the military aggression by reaffirming its support for Chinese sovereignty and territorial integrity. Likewise, Afghanistan went a step forward and followed regular lexicons used by China in official Chinese statements. Different from others, Afghanistan used the word one-China principle instead of policy. It maintained that both the United States and China shall work together for regional and global peace. Both "principle" in one China stance and "the United States and China working together" are steady vocabularies used by China.

Sri Lankan acknowledgment of the one-China policy leveraged benefits compared to Pakistan and Afghanistan. Sri Lanka fumbled into geopolitical contestation between China and India because of the vessel Yuan Wang 5. China explained this vehicle as replenishment in the Hambantota port but India suspected it was a spy machine. Sri Lanka leveraged its one-China policy to escape the contestation.

One statement issued by Sri Lanka five days after Pelosi's visit, linked 'one China' with the disputed Chinese vessel Yuan Wang 5. Drafted smartly, the first paragraph of the statement deferred this vessel's visit to the Hambantota port of Sri Lanka but the last paragraph of the same statement explained Sri Lankan adherence to the one-China policy. Sri Lanka seized the Pelosi visit and its adherence to the one-China policy to postpone the vehicle's pre-scheduled stay for replenishment from 11th - 17thAugust to 16th - 22ndAugust. On August 15, India donated a Dornier Maritime Reconnaissance aircraft to strengthen the maritime security of Sri Lanka.

In Nepal, China used indirect assertive diplomacy and rushed to remind Nepal of its foreign policy. Before any official statement by Nepal, Ambassador Hou Yanxi released a statement coupling the one-China policy with the political foundation of bilateral relations. Such a hasty statement signals Chinese distrust in Nepal's one-China policy.

But Nepal's response was persuasive and successful to leverage one China. First, the official press conference to reiterate support for the one-China policy didn't convince China. Later, the foreign minister himself visited China and assured his counterpart of Nepal's adherence to one and only China. Nepal successfully leveraged one-China to start delayed infrastructure projects and secure grants.

Chinese Foreign Minister Wang Yi ensured the construction of the delayed second phase of the ring road in Kathmandu. He assured to begin the feasibility study of the Keyrung-Kathmandu railway under a grant, but not loan. Last, he assured support for the pre-feasibility study of cross-border transmission lines and announced the provision of 800 Million RMB. Nepal also used Pelosi’s Taiwan visit and its China policy in securing interests, although it seemed arduous initially.

Bangladesh successfully used its one-China policy in convincing China to resolve the refugee problem with the military regime of Myanmar. Foreign Minister Wang Yi visited Dhaka after Bangladeshi media cited an official statement affirming Bangladesh’s adherence to one China, but it was absent on the official government website. He held high-level discussions with Bangladeshi Prime Minister Sheikh Hasina. She exhibited firm support for one China and leveraged it to convince the Chinese foreign minister of the agreement between Bangladesh and Myanmar. China accepted this agreement and supported the early start of the first batch of repatriation of Myanmar refugees.

China’s diplomatic failure in India and the Maldives

The Maldives pronounced its support for one China but refused to make any official statement. But India neither made any official statement nor reiterated its adherence to one China. Rather, in response to the Chinese military aggression, India urged the exercise of restraint and avoidance of unilateral actions to change the status quo. On one-China policy, the Indian external ministry retorted a Xinhua news reporter that Indian policies are familiar and don’t need reiteration.

Convincing India is a daunting task for China. India ceased using one-China in official communication after Beijing provided stapled visas to Kashmiris. Since then, border tensions and security anxieties are increasingly worsening, although trade relations are sound.

India has security concerns about the Chinese movement in the Galwan Valley. The border skirmishes between China and India led to the death of 20 Indian soldiers. China toils in maintaining the status quo, whereas India prefers in resolving the Galwan dispute first.

India denounces the China-Pakistan Economic Corridor (CPEC) as against its sovereignty and territorial integrity. In addition, China's visible influence in the region and simultaneous Indian drive toward QUAD and Indo-Pacific Strategy (IPS) are sowing mistrust on both sides. Multiple issues need resolution before China creates trust and diplomatically convinces India to reiterate the one-China policy.

In conclusion, South Asia was divided while responding to Pelosi's Taiwan visit. Pakistan and Afghanistan followed the Chinese standpoint. Nepal, Bangladesh, and Sri Lanka reiterated their one-China policy and leveraged it to attain their interests but India and the Maldives opposed China to reiterate their policy. Similarly, Chinese diplomacy was only partially successful. Although most countries officially restated the Chinese position with or without leverage, it failed to persuade India, which is a regional power and an aspiring catalyst in the global power equation.