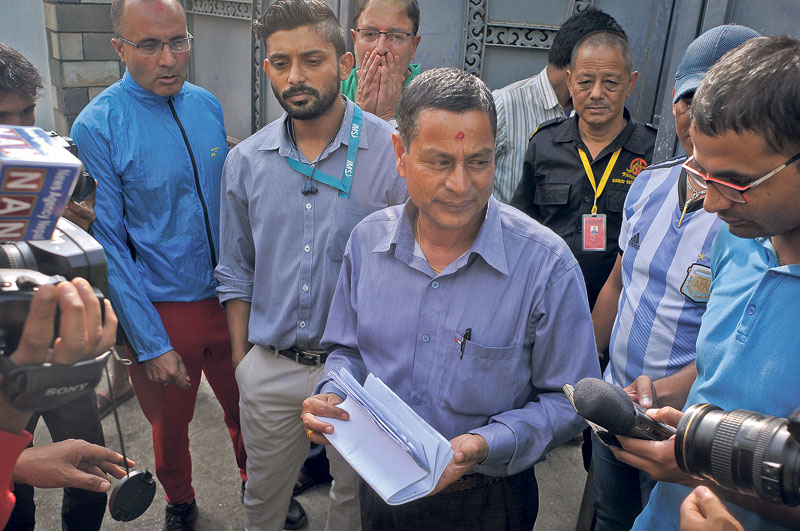 KATHMANDU, Oct 6: Supreme Court staffers are facing tough time serving the court’s notice on Lokman Singh Karki, the chief commissioner of the Commission for the Investigation of Abuse of Authority (CIAA). The court’s tameldars (process servers) on Wednesday could not serve a court notice on Karki although they reached Karki’s house at Baneshwar Height, ward number 10 of Kathmandu Metropolitan City.

As the Supreme Court has decided to review its previous verdict and re-examine a writ petition challenging Karki’s appointment as the chief of the constitutional body, the process servers are facing tough time serving the court notice.

“She did not show up at Karki’s permanent address although we waited for three hours. We could not paste the notice at the house as it had been rented out,” said Shambhu Khatri, a process server.

Chief Executive of Kathmandu Metropolitan City Rudra Singh Tamang said that the secretary might not have been able to visit Karki’s permanent address as the ward secretaries were away on training.

Now the court staffers are planning to take the court notice at Karki’s official residence on the CIAA premises at Tangal, Kathmandu.

The Supreme Court has scheduled the hearing on the writ petition right after the Dashain festival.

Aryal had claimed that Karki was not eligible candidate for the position arguing he lacked the expertise set out in the interim constitution and he also lacked high moral character as the government had taken action against him for his role to suppress the April 2006 movement.

A division bench of justices Gopal Parajuli and Om Prakash Mishra had quashed both the petitions on September 24, 2014.

Analysis: Scientists ask whether Omicron can outrun Delta
12 hours ago

Worldwide screening of '14 Peaks, Nothing Is Impossible' based on Nirmal Purja's biography
5 hours ago

UML General Convention: Voting begins at 4 AM
7 hours ago