KATHMANDU, May 14: The Supreme Court on Friday opened the door for hearing on writ petitions under extra ordinary jurisdictions as an emergency remedy of cases related to serious violation of constition and fundamental rights.

A full court meeting of the apex court justices on Friday made a decision to resume hearing on such writ petitions that were suspended after local administration in Kathmandu enforced prohibitory orders to contain spread of COVID-19 two weeks ago.

Citing rapid spread of new variant of coronavirus (COVID-19), the apex court had earlier suspended its extra ordinary remedy as well as the regular remedy except for the hearings of habeas corups cases since the last two weeks immediately. This came shortly after the government's decision to impose the prohibitory order.

The apex court in its press relase issued on Friday stated that it will conduct vitual hearings of such cases in order to tackle the issues to be registered under the new arrangements.

The Supreme Court Bar Association (SCBA) and the legal circle had seriously criticized the apex court for stopping even the extra ordinary jurisdiction at a time when the people have been facing serious encroachment of their fundamental rights such as right to life and the health during the pandemic.

Issuing a press release on the occasion of Law Day on Sunday, the SCBA had asked the apex court to immediately resume hearings on writ petitions to assure the guardianship of fundamental rights of the individuals. Chief Justice Cholendra SJB Rana had asked all stakeholders concerned to consider difficulties they face as a result of the pandemic.

Like other sectors, the judiciary has also been seriously affected by the second wave of the COVID-19 pandemic as Judge Basudev Lal Shrestha of Kathmandu District Court and Laxmi Bahadur Nirala, member of the Judicial Council, lost their lives while fighting against the deadly virus a few days ago. 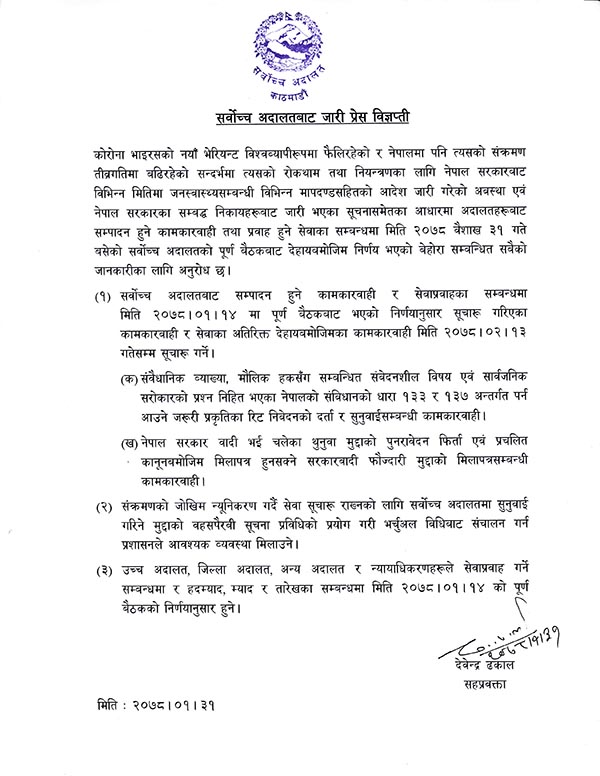