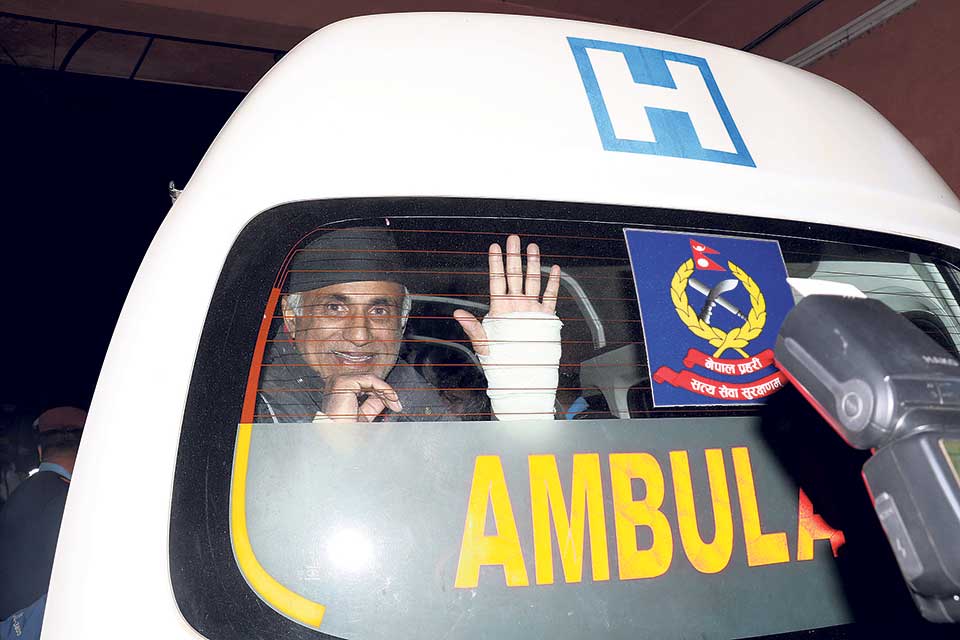 KATHMANDU, Jan 11: Considering his statement that  he is into healthy criticism of the court and also the   condition of his health, the Supreme Court on Wednesday released Dr Govinda KC.

A division bench of justices Purushottam Bhandari and Bam Kumar Shrestha handed down the order to release Dr KC on tarekh.  He was arrested two days ago on a charge of contempt of court for his allegations against Chief Justice Gopal Parajuli. He will be required to reappear in court on February 20.

Observing that while recording his statement he mentioned that he has been duly respecting the judges and the court and was only  attempting to inspire society as a whole to engage in  healthy criticism of the court, the bench directed his release in the presence of senior advocate Surendra Bhandari. Bhandari is also the legal counsel for Dr KC as per Section 47 of the Court Management Chapter in the Muluki Ain.

“Even though so many other things were mentioned by the defendant in his press statement,  he also stated that he would respect the judges and had not done  anything against the court, but only  attempted a healthy criticism to inspire society,” the bench said. “Moreover, also  considering the health condition of  defendant Dr Govinda KC, it is hereby decided to release him on condition of doing  whatever will be decided in  future,” it added.

The bench also directed that   both the citizenship certificates obtained by Chief Justice Parajuli from Kathmandu District Administration Office be produced, as also the decision of the Judicial Council in relation to Parajuli’s age.  Dr KC, while recording his statement to the apex court, had asked for an inquiry into Parajuli’s  citizenship certificates   and  alleged  that he had changed his age with an intention to stay  longer in the post of CJ.

The bench likewise directed the  submission of a verdict which was recently handed down by Parajuli and another judge, Deepak Kuamr Karki, in relation to the reinstatement of Dr Shashi Sharma as dean of the Institute of Medicine (IOM) for just four days. Dr KC, while announcing his hunger strike on Monday, criticized the verdict handed down just a day ago.

Dr KC had asked the bench to  order an inquire into everything that he has been advocating for the sake of  the general public. He said he was even ready to go to jail and  that he would not beg anyone to release him or  acquit him. “I am also ready to go to  jail even for five years but I want a judicial inquiry into my demands,” he stated at the bench during hearings in his case.

Senior advocates Krishna Prasad Bhandari and Dr Surendra Bhandari, who had pleaded on behalf of Dr KC, also demanded a judicial inquiry into matters raised by Dr KC because every point raised by him had already been borne out.

A demonstration organized by Naya Shakti Party at Maitighar in Kathmandu expressing solidarity with Dr Govinda KC and demanding his release on Wednesday afternoon.Later in the afternoon, the Supreme Court decided to free Dr KC, who was arrested Monday evening on the charge of contempt of court.           Photo: Bijay Gajmer/Republica

Stakeholders call for upholding judicial dignity
Following  the Supreme Court order, stakeholders have asked the CJ to investigate  the matters raised against him.

High Court Bar Patan asked the CJ to investigate  the issues raised during the hearing of the contempt of court case against Dr Govinda KC and prove his probity and dignity as chief justice. “We would like to request a stop to criticisms in every issue and that it should not be made a regular practice,” said a press release jointly issued by Bar Chairman Major Thapa, Vice-Chairman Sebanta Raj Niraula and Secretary Tara Shrestha.

The SC’s official trade union also called for respect for the court order and  for stopping the practice of regularly criticizing the judiciary over its functioning. The press release issued by the union asked everybody to practice  restraint on  matters relating to the judiciary.