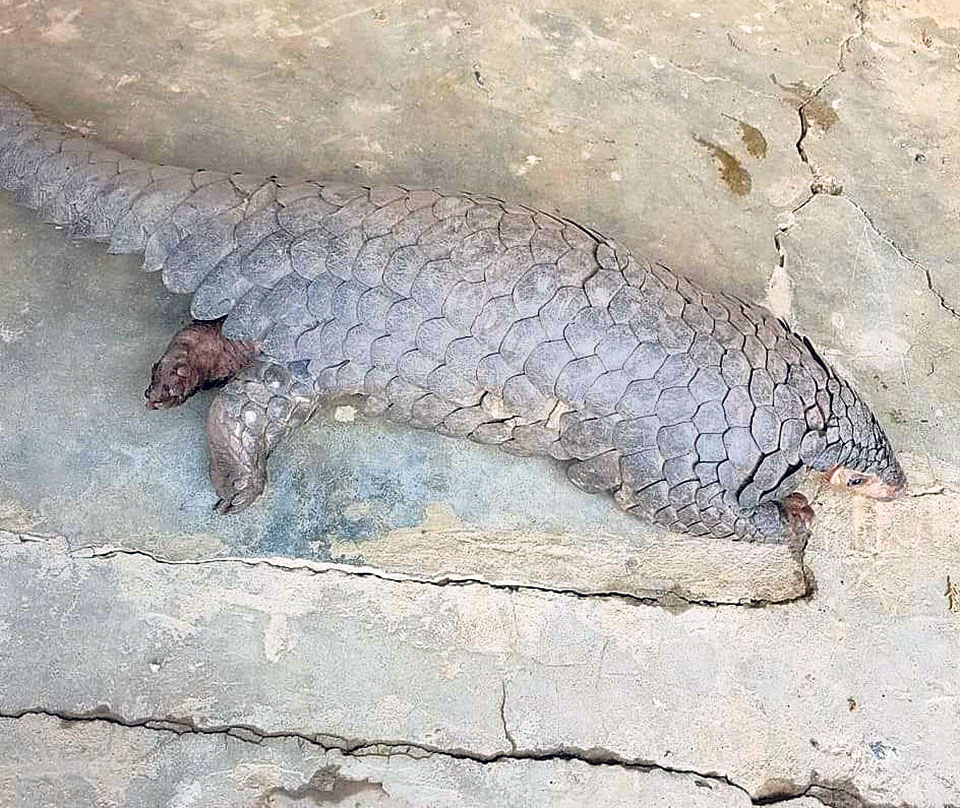 Pangolins are on the verge of extinction. They need to be saved

Pangolin, the world’s most trafficked mammal, is shy and nocturnal in nature. It curls-up and becomes stationary when it sees other animals, humans or any objects. Usually at dark, because of its peculiar behaviors, there have been increased incidents of pangolins being stumped by heavy vehicles likes trucks, where these vehicles travel round the clock to and from Katari through Lekhani of Udayapur district.

Once, a container ran over a pangolin on the way to Ghurmi Bazaar. Nearby locals promptly gathered and took hold of injured pangolin and let the transportation workers go.

“That container weighed more than 20 tons. Astonishingly, instead of instant death it was alive and immobile but it died after a couple of days. My family forced me to delete all photographs and videos that I took. Even, I was scared to carry it. But now, I have only this one,” said one local person.

Many old and recent remains of manmade gullies near pangolins’ burrows were observed at Nepaltar’s forests which are non-protected areas. These gullies were dug all around the burrows in order to trap and capture pangolins. All these indicate the level of threat to this species. Some locals said the meat of pangolins tastes delicious.

Hearing them, it seemed that many have eaten it without prior knowledge that pangolins are enlisted as “protected species” by the government of Nepal. Out of eight species only Chinese pangolin, listed as “critically endangered” and Indian pangolin listed as “endangered” are found in Nepal.

According to International Union for Conservation of Nature (IUCN) Red List (2020), pangolin along with rhino, tiger and more than 30,000 species face the threat of extinction. Many nations protect all of eight pangolin species but they are also described as being under threat of extinction. Main reason why pangolins are being smuggled is that their scales are highly priced in black market. These illegal activities have driven this scaly anteater into great threat. Hundreds of tons of pangolins’ scales along with hundreds of live pangolins are being confiscated around the globe every year.

Pangolins are killed and poached for meat and scales. For example, its meat is consumed as delicacy in many parts of China and Vietnam. But now pangolin is also being linked as intermediate host of new zoonotic disease called novel coronavirus. Zoonotic diseases are such diseases which get transmitted from animals to humans. It is pandemic and believed to have spread from Wuhan Seafood Wholesale Market in China with increasing number of tens of thousands being infected and hundreds of death toll till date. Researchers from South China Agriculture University have said that pangolin shares 99 percent similar genetic sequences to coronavirus. Researchers are assuming that coronavirus outbreak was transmitted from pangolins as a result of its consumptions by humans.

Pangolins are consumed because of many unscientific facts and placebos (placebo is defined as a dummy medicine which constitutes inactive substance/s but is given/used in the belief that it exhibits effective treatment). For instance, pangolins’ scales are believed to cure many ailments like rheumatism and epilepsy. These “hearsays” are widely believed.

Likewise, many believe that its scales have incredible medicinal benefits, but majority are unaware about the fact that pangolin’s scales have the same composition as that of our hair and fingernails. Even though it is already proven to have no medicinal value, its scales are publicized to revitalize one’s health and widely believed to cure many diseases.

These beliefs and hearsays are driving these illegal wildlife activities and illegal wildlife trade (IWT) as a multibillion-dollar industry. This has put huge pressure on many nations to control IWT to demotivate wildlife crimes. Nepal has executed one of the stringent laws. For instance, according to Convention on International Trade in Endangered Species of Wild Fauna and Flora (CITES) Act (2017), committing wildlife crimes like killing, poaching, possessing, transporting, buying, selling pangolin and its scales will result in up-to 15 years imprisonment or one million rupees of fine or both. But such illegal activities are going on unabated. Various reports of pangolin smuggling substantiate this.

In Udayapur, scales of pangolins are the source of lucrative income for poachers and buyers. Besides, many of the locals are not aware of the fact that killing wildlife is illegal. Thus they need to be educated on this matter as well.

Pangolins are on the verge of extinction. They need to be saved. But for this, there should be stringent punishment for those who are involved in killing and smuggling of pangolins. Awareness should be spread that consuming pangolins’ meat can even result in contraction of diseases like coronavirus. This will help to discourage people from consuming pangolin’s meat. Besides, we also need to raise awareness among local communities for saving the pangolins. Otherwise, this endangered mammal could go out of existence because of our actions.

The author is affiliated with Greenhood Nepal. The write-up is based on field anecdote of assessing Chinese pangolin’s distribution, habitats and threats in Kamala River basin
Email: sabitrirai4env@gmail.com

Conserving gharial is just one example of how hard it is to protect one species from extinction. There is no... Read More...

JOHANNESBURG, Dec 28: Amid population declines for many wildlife species in Africa, conservationists are sounding alarm bells for the cheetah, the... Read More...

BANEPA, Oct 19: One person was arrested by the police from Panauti of Kavrepalanchowk along with pangolin scales. ... Read More...