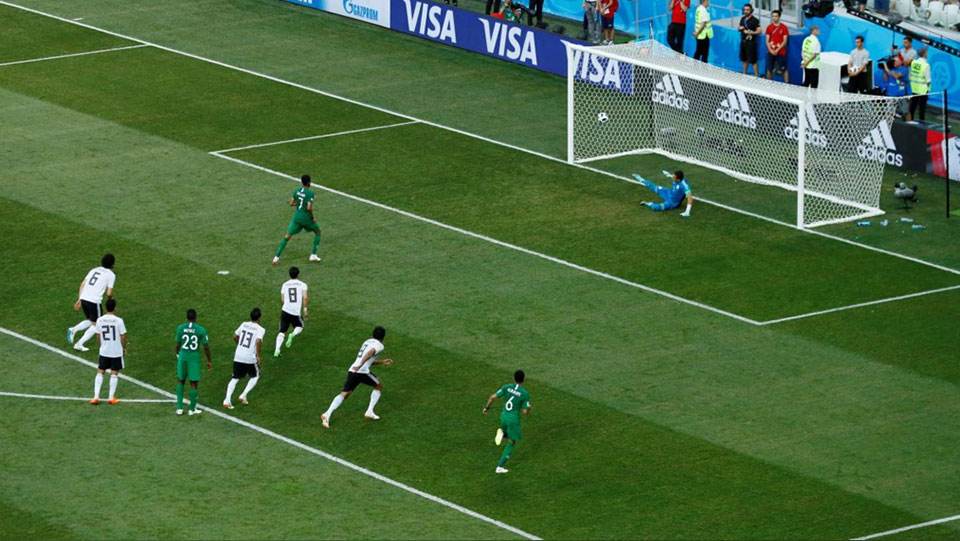 VOLGOGRAD, June25: Saudi Arabia pulled off a last-gasp 2-1 win over Egypt as the two sides departed from the tournament on Monday, adding to the misery of Egypt’s prolific striker Mohamed Salah and giving the Saudis their first victory at a World Cup since 1994.

In an often end-to-end game between two teams already packing their bags for the journey home, Salah put Egypt ahead but wasted a golden opportunity to double the lead, allowing the Green Falcons the chance to claw their way back.

The win, settled by midfielder Salem Al-Dawsari’s angled strike in the 95th minute, meant Saudi Arabia finished third in Group A, scoring their only goals in Russia and putting behind them an opening day 5-0 thrashing by the hosts.

Egypt finished in last place with no points, a result likely to heap pressure on Argentine coach Hector Cuper.

“I think we played well but the results didn’t go our way,” Cuper told reporters. “Yes we lost all three matches but we lost two games with goals conceded after 90 minutes... I’m sad and disappointed but here at the World Cup we are up against the top teams in the world and even they concede goals too.”

It was a sad send-off for Salah who missed the opening game of the tournament with the shoulder injury he picked up during Liverpool’s Champions League final defeat by Real Madrid in May.

Saudi Arabia coach Juan Antonio Pizzi praised his team for not giving Egypt the space they needed to feed Salah who looked like he was still suffering the effects of the injury.

“It stopped him even from preparing properly for this World Cup,” Pizzi told reporters. “I think that psychologically his injury was also hard for his team, as it was for Liverpool. I think it had an impact both on the national team and on Liverpool.”

There had been confusion before the kick off about whether Salah would play when a team sheet showing him not in the starting line-up was posted on an Egypt account on Twitter, only to be replaced minutes later by another that included him.

Earlier on Monday, the Egyptian Football Association denied reports that Salah was considering retirement from the national team after unwittingly becoming a publicity pawn for the Kremlin-backed leader of Chechnya, Ramzan Kadyrov.

When Salah opened the scoring against Saudi Arabia, he chose not to celebrate.

ROARING SUPPORT
Egypt’s hordes of supporters showed their support for Salah, roaring him on whenever he got near the ball.

He opened the scoring in the 22nd minute when he raced on to Abdallah Said’s long pass and kept his cool to lob Saudi goalkeeper Yasser Al-Mosailem.

That was his second goal in the two games he has played in Russia and he should have had another almost immediately but missed when put clean through.

He paid for the wasted opportunity deep into first-half stoppage time when Colombian referee Wilmar Roldan awarded Saudi Arabia a penalty and Salman Al-Faraj converted from the spot.

Minutes earlier, Egyptian keeper Essam El-Hadary had marked his record-breaking appearance as the oldest player at a World Cup at 45 years of age with a spectacular save from another penalty, diving to his right and sticking out his left hand to turn Fahad Al-Muwallad’s strike on to the bar and away.

Saudi Arabia pressed for a winner in the second half but the game appeared to be heading for a 1-1 draw - which would have meant Egypt finished third in the group - until Abdullah Otayf teed up Al-Dawsari to angle his shot past El-Hadary.

SANTIAGO, Oct 6: Chile survived a late scare to beat Ecuador 2-1 on Thursday and keep alive their hopes of... Read More...

Which services will be allowed in Kathmandu Valley from Tuesday?
11 hours ago

Brazil passes half a million COVID-19 deaths, experts warn of worse ahead
22 hours ago