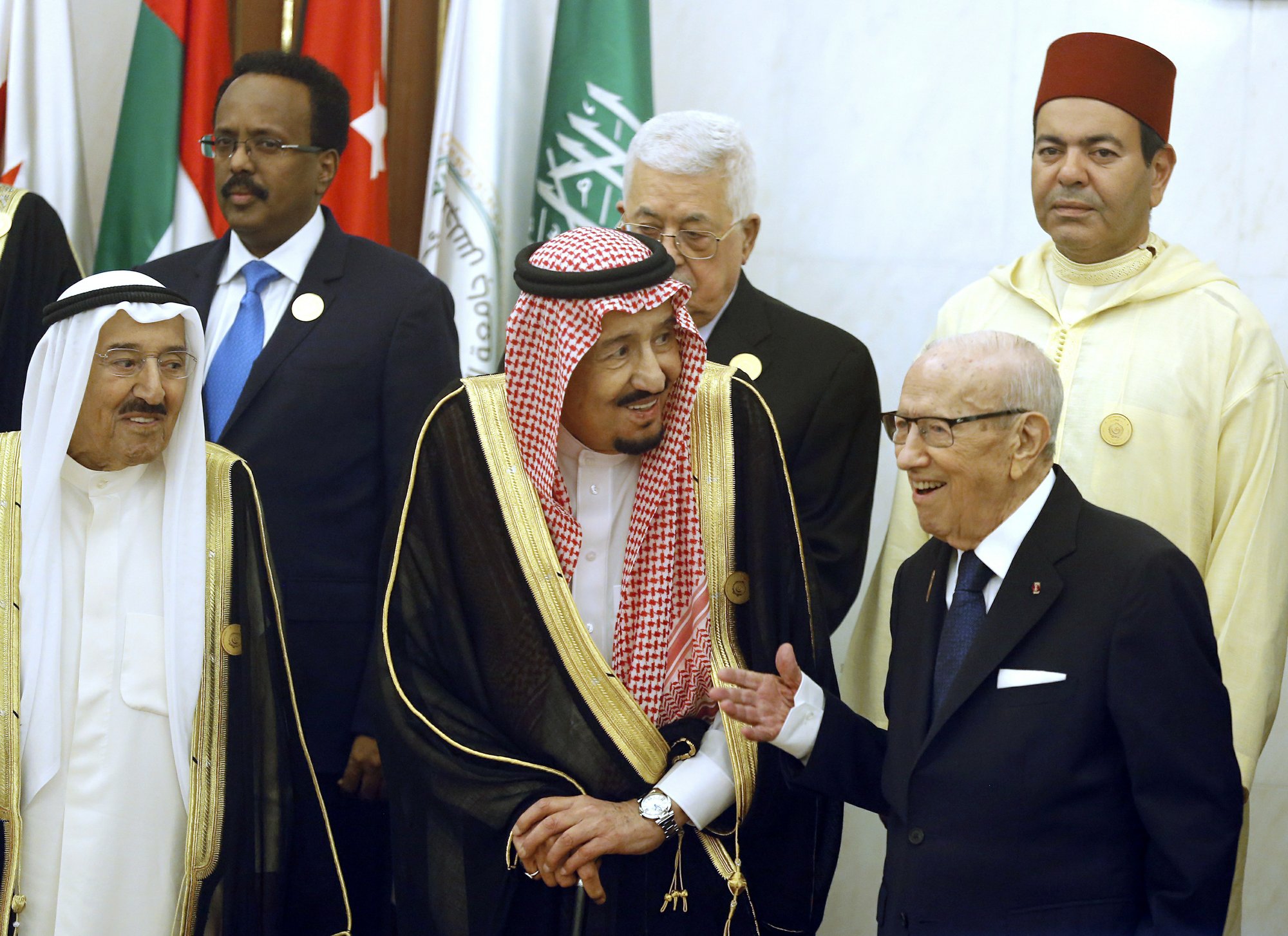 Kuwait's Emir Sheikh Sabah al-Ahmad al-Jaber al-Sabah, left, and Saudi Arabia's King Salman, center, listen to Tunisian President Beji Caid Essebsi, right, during a group photo session ahead of an emergency Arab summit in Mecca, Saudi Arabia, Thursday, May 30, 2019. King Salman opened an emergency summit of Gulf Arab leaders in the holy city of Mecca on Thursday with a call for the international community to use all means to confront Iran, but he also said the kingdom extends its hand for peace. (AP Photo/Amr Nabil)

MECCA, May 31: Saudi Arabia’s King Salman opened an emergency summit of Arab leaders in Islam’s holiest city of Mecca on Friday with a call for the international community to use all means to confront Iran, but he also said the kingdom remains committed to peace.

King Salman delivered his remarks at Arab summits in Mecca that were hastily convened after a spike in tensions between Saudi Arabia and its rival Iran.

Tensions have also spiked between Tehran and Washington in recent weeks, with the U.S. sending an aircraft carrier and B-52 bombers to the Persian Gulf. The Trump administration’s taken a hard line with Iran, first withdrawing from Tehran’s nuclear deal with world powers last year, then imposing punishing economic sanctions on the country.

Saudi Arabia’s effort to draw regional leaders to Mecca reflects the kingdom’s desire to project a unified Muslim and Arab position on Iran.

Still, there were visible signs of tension and disagreement among the Arab officials gathered at the meetings, which began just before midnight on Thursday and ran into the early hours of Friday due to Ramadan, which practices include day-long fasts and extended evening prayers.

Morocco did not send its king amid a cooling of ties with Saudi Arabia, while Qatar sent its prime minister rather than its ruling emir amid a diplomatic standoff with Arab neighbors. Iraq, which lies on the fault line between Shiite Iran and the mostly Sunni Arab world, rejected the Arab League’s final statement after the summit and was not a signatory to it.

All, however, condemned the alleged sabotage of four oil tankers off the coast of the United Arab Emirates and a drone attack on a key Saudi oil pipeline earlier this month.

Saudi Arabia accuses Iran of arming Yemeni rebels behind the pipeline attack. Iran denies being involved in the incidents.

In his opening remarks, King Salman called on the international community to thwart Iran’s behaviors and for “using all means to stop the Iranian regime from interfering in the internal affairs of other countries, harboring global and regional terrorist entities and threatening international waterways.”

He added that Saudi Arabia is keen to protect the region from the scourge of war and that its “hand remains extended for peace.”

Iraq, meanwhile, struck a sharply different tone. President Barham Salih said in his remarks that Iran is a Muslim country and neighbor.

“We do not hope for its security to be targeted since we are sharing 1,400 kilometers (870 miles) of border and a number of relations,” he told the gathering of Arab League heads of state.

“Honestly, the security and stability of a neighboring Islamic country is in the interest of Muslim and Arab states,” he added.

Another summit in Mecca is expected on Friday, focusing largely on Palestinian statehood and independence. It will bring together leaders from the 57-nation Organization of Islamic Cooperation, which is headquartered in Saudi Arabia.

With a captive audience that included King Salman, Palestinian President Mahmoud Abbas used his speech in Mecca to slam the Trump administration’s deal aimed at dealing with the Israeli-Palestinian conflict.

Glimpses of the plan hint it will focus heavily on so-called economic peace while sidelining or ignoring the longstanding Palestinian goal of independence. The two-state solution continues to enjoy the broad support of the international community.

President Donald Trump’s son-in-law and adviser Jared Kushner seeks to rally Arab Gulf states to back economic initiatives for Palestinians as part of the plan next month in Bahrain.

There are diverging policy differences among once clubby Gulf Arab states toward Iran, as well. Oman, for example, has relations with both Saudi Arabia and Iran and acts as a facilitator of talks.

The diplomatic standoff between Qatar and Saudi Arabia, the United Arab Emirates, Bahrain and Egypt has pushed the tiny nation closer to Iran.

Washington has tried unsuccessfully to mediate an end to the diplomatic standoff between its Gulf Arab allies. State Department spokeswoman Morgan Ortagus said Thursday the U.S. welcomes Saudi efforts to discuss Iranian threats in the region.

“Gulf unity is essential in confronting Iran, to confronting their influence, to countering terrorism writ large, and, of course, to ensuring a prosperous future for the Gulf,” she said.

Upon their arrival at the airport in Saudi Arabia, leaders were shown Yemeni rebel military items, such as a destroyed drone, missiles and mortar shells used in the conflict with the Saudis. They were given a brief explanation of the weapons on display by Col. Turki al-Maliki, spokesman for the Saudi-led coalition at war in Yemen.

Meanwhile, Trump said this week the U.S. wasn’t “looking to hurt Iran at all.”

“We’re not looking for regime change — I just want to make that clear,” Trump said. “We’re looking for no nuclear weapons.”

Saudis blame Iran for drone attack amid calls for US strikes

DUBAI, May 17: Saudi Arabia accused Tehran of being behind a drone strike that shut down a key oil pipeline... Read More...