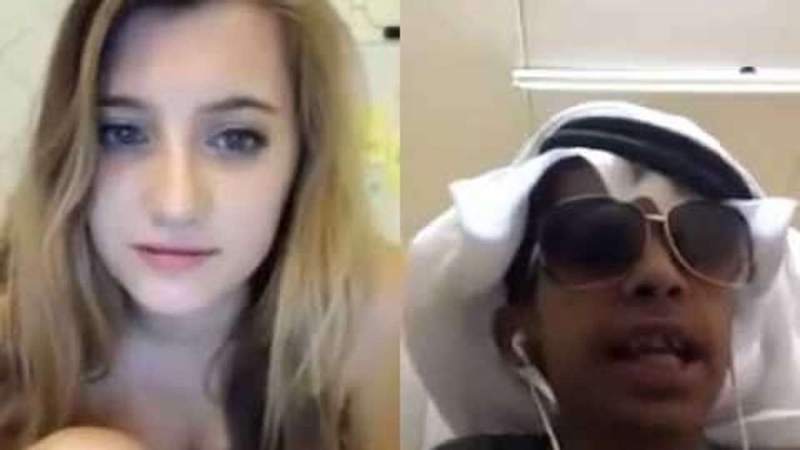 He spoke bits and pieces of English. She spoke no Arabic. Yet over weeks of chats they found an often hilarious way to bridge their linguistic and cultural divides. Their conversations soon attracted hundreds of thousands of viewers in Saudi Arabia and around the world.

In one video exchange, Abu Sin — a nickname that means “the toothless one” because he had crooked front teeth — is wearing a black baseball hat flipped sideways. Blond-haired Christina is wearing a gray tank top. (Police told local media that Abu Sin is 19, but some have questioned that.)

“Christina, I love you,” says Abu Sin in broken English.

“I love you, too,” she replies, smiling.

Then he asks her, jokingly, to marry him. She tells him to wait, and draws a wedding band on her finger. “I want to marry you, too,” she says.

In the conservative Sunni Muslim kingdom, there are strict rules separating the genders. Virtually all public spaces are segregated, and most women wear head-to-toe black abayas as well as veils covering their face and hair. Unmarried men and women who mingle romantically often face harassment, heavy fines, even arrest at the hands of the religious police. If caught, women in particular face social stigma and punishment by their families.

So many young Saudis have turned to social media networks to pursue forbidden relationships. And the religious police have followed, monitoring online forums. Still, Abu Sin’s exchanges with Christina seemed harmless, since she lived thousands of miles away.

Nevertheless, Saudi authorities arrested him late last month for “unethical behaviour” because of the chats, according to Saudi media outlets. His exchanges with Christina, according to lawyers, could violate the nation’s cybercrime law that bans creating online material that goes against morals and religious values, as well as its rigid interpretation of Islamic law.

Miman told the Saudi Gazette newspaper that Abu Sin made “enticing videos” that “became famous” and negatively affected Saudi Arabia’s image in the world. He added that police had received requests from the Saudi public to have Abu Sin reprimanded.

One Saudi newspaper, Arab News, wrote that the teen deserved to be placed on trial because his video exchanges “made people laugh” at Saudis. Other commentators declared that Abu Sin’s chats were a reflection of how youth are being improperly raised in the kingdom.

Last week, Abu Sin was released on bail. He could face a five-year prison sentence and be forced to pay a fine as much as $800,000.

On Sunday, Abu Sin released a new video, lasting about a minute. In it, he promised he would no longer use social media in way that would violate the kingdom’s moral and religious codes.

He also said that he “repented” for chatting with girls on the Internet.

Umesh pleads for life from jail in Saudi Arabia

Murder-accused surrenders to police
18 minutes ago

Gold price increases by Rs 400 per tola
54 minutes ago