Female-only audiences, no social media — but as one observer said, “Women here have been waiting for years for a time to shine.”

RIYADH, April 19: Fashion week in New York, Paris and Milan can often be a surreal experience, full of towering fantasy, inflated egos and sky-high stilettos. But last week, on the eve of the inaugural Arab Fashion Week Riyadh, the backdrop was very different: Sandstorms and thunderstorms loomed, and missiles fired by Houthi rebels in Yemen sailed overhead.

That, along with a lot of logistical confusion, meant that the week — another example of the social and economic change sweeping through what has been one of the most conservative countries in the world — did not go as smoothly as planned.

The first official fashion week ever held in Saudi Arabia was, said Marriam Mossalli, a luxury consultant in Jeddah, “an amazing opportunity to shift the disconnect in the minds of outsiders about Saudi women, how they design and how they dress. Women here have been waiting for years for a time to shine.”

Yet it almost didn’t happen, though perhaps not for the reasons you would assume.

Five months in the planning, and organized by the Arab Fashion Council (a nonprofit in Dubai that opened a Riyadh office in December), Arab Fashion Week was originally set to begin on March 25. It was postponed after scores of foreign journalists, buyers and models were unable to obtain visas in time to enter the country last month.

Three weeks later it was back on, with 16 shows scheduled, the high-profile guest designers Jean Paul Gaultier and Roberto Cavalli and attendees flown in from around the world.

But on Wednesday evening, 45 minutes before the first model was due on the runway on opening night, the phone screens of dozens of fashionable women dressed in abayas milling in the palatial lobby of the Ritz-Carlton hotel began to flash bright.

To their dismay, fashion week was now being delayed again by an additional 24 hours, according to a statement from the organizers on WhatsApp. The reason? The show tent, in the vast grounds of the luxury hotel, was apparently unfinished and unsafe for use, because of bad weather.

There was despair among the designers, both locals and those from countries including Lebanon, Egypt and Italy, who had traveled to show off their collections to the affluent Saudi market. Some guests, many of whom had flown in for only the opening night, were aghast at the late notice.

“I feel frustrated because this suggests that we are incompetent and unorganized, and we absolutely are not,” Ms. Mossalli said, as she sipped a hot chocolate in the lobby and waited for an Uber to the airport. She said that disorganization as well as the bad weather cited by the Arab Fashion Council had led the Saudi government’s General Entertainment Authority to take over production of the event, including the construction of the tent.

Ticket sales to women in Riyadh had been low, perhaps because there had been little local marketing. Some brands had pulled out of the event thanks to the lack of communication, and this may have affected sales as well.

“The organizers need to align their many story lines and just tell the truth,” Ms. Mossalli said. “It totally sends out the wrong message at an important time for us, and that is disappointing given all the design talent we have amassed here this week.”

The high-profile, high-stakes plan for a first fashion week in Saudi Arabia, unthinkable even two years ago, comes at a time of ambitious plans for economic and social reform in the country, led by Crown Prince Mohammed bin Salman, the kingdom’s de facto ruler.

Taking inspiration from the successes (and failures) of smaller Gulf neighbors like Dubai, Saudi Arabia is trying to shift away from a reliance on oil and gas revenues and is repositioning itself as a dynamic place for business, hospitality and leisure — and foreign investment and visitors.

“MBS,” as the crown prince is known, has been spearheading a rapid easing of strict and longstanding social restrictions. This has included reining in religious police, introducing public concerts, lifting bans on cinemas and allowing women to drive.

However, women here must still abide by so-called guardianship laws, which give male relatives the power to make many decisions integral to their daily lives.

He has been on an outreach tour of the United States, from Harvard to Hollywood, and in an interview with “60 Minutes” in March, the crown prince even said that women should be able to choose what they wear in public, as long as it was “decent” and “respectful.”

The country’s fledgling fashion industry has also found its way into the spotlight. Although there have been designers in Saudi Arabia for years (and fashion shows — behind closed doors in palatial private residences), most brands have struggled with finding materials, studio staff and production facilities to scale their businesses, eventually opting to show their wares abroad.

A pillar of Vision 2030, the crown prince’s blueprint for Saudi Arabia’s future, is supporting small- and medium-size businesses, particularly those owned by women. An important step was the establishment of the General Authority for Small and Medium Enterprises (Monsha’at) in 2015, which aims to increase the contribution of these companies, which include fashion businesses, in the economy from 500 billion Riyals in 2014 to two trillion Riyals in 2030.

The social shifts can also be seen on the increasing number of women in Saudi cities who have been eschewing the traditional black abaya in favor of more colorful or patterned cloak designs (especially in the more liberal port town of Jeddah).

Flashes of a gradual wardrobe change were being quietly modeled by guests at fashion week via exquisite florid embroidered sleeves or sequins that cascaded down the backs of flowing cloaks. They were accessorized with Gucci sneakers or Christian Louboutin stilettos, quilted Chanel handbags and diamond earring studs the size of Gobstoppers.

Arwa Al-Banawi, a Saudi designer in Dubai who showed a polished contemporary collection of tailored staples infused with Bedouin references at the delayed opening night on Thursday, said she believed a Saudi fashion week could be another step on the road to female empowerment in her country.

“It is so important for us that we have our own fashion week — historically I have always shown in Dubai or Paris but as a Saudi woman I really wanted to be a part of this moment,” she said. “Yes it has been the most challenging event I have ever been a part of, but the only way to look is forwards not backward. Next time will be better.”

Mashael AlRajhi, a Riyadh-based designer of men’s and women’s wear, agreed. She showed her street wear pieces with arabesque roots, including a collaboration with Nike on its first runway hijab, on Friday night.

“There is so much creative talent flourishing here now. The next priority has to be building a better local infrastructure so that the Saudi fashion industry can grow, and most designers don’t have to leave to scale themselves anymore” she said, adding that while she was proud to run a studio and manufacture clothes in Riyadh, it was far from easy. “A fashion week is a platform that gets the attention of the industry and those who can help us prepare for what comes next.”

Once the shows actually happened, the determination, thoughtfulness and ambition of the many young brands in Riyadh last week were clear, despite the many challenges.

A vast tent for 1,500 people had been erected, with a glossy catwalk backed by a floor-to-ceiling video screen advertising concerts and BMW cars (with beautiful Saudi models in abayas seated behind the wheel). There were John Legend and Ed Sheeran tracks being played live on the traditional Arab oud.

Male designers weren’t allowed backstage ahead of their shows. There was a strict social media ban, which meant an absence of front-row influencers, male editors and walkers, and overeager photographers, though a few official female photographers were granted access. (As Jacob Abrian, the chief executive of the Arab Fashion Council had mused at a media cocktail party on the eve of the event, it would be the first fashion week he had organized that he would not be allowed to see in person.)

This gave the all-female audience the chance to take off their abayas, though few did. Instead, glimpses of embellished dresses and sleek designer trouser suits could often be seen peeking through. And on the runway: sorbet-hued frothy gowns of Lebanese couturiers like Tony Ward and Naja Saade; avant-garde all-black designs of Kazakhstan’s Bibisara; a capsule collection of sequined abayas by Maison Alexandrine of Brazil; and over-the-top glamour courtesy of Mr. Gaultier.

There was little of what has become known as “modest” fashion — chic yet conservative designs, often with long sleeves and ankle-length hemlines. Ms. Mossalli offered an explanation.

“We either wear our abaya or Western styles of our choice under that — there is still no in-between here like there is in other Islamic countries,” she said. “As the changes continue here, however, modest fashion will be a huge growth market.”

Mr. Abrian, of the Arab Fashion Council, not surprisingly, agreed. “The stress is gone from all the past weeks,” he said, when it was clear the shows would finally begin. “I just feel relaxed and have started preparing for October. I might go and watch some TV.” He was proud of the international brands that had come to Saudi Arabia, he said, and that they could see the opportunities emerging here.

“Inshallah it will just all go smoothly now, this has been my baby after all,” he said, sipping nervously from his coffee cup. “There have been some major hiccups, but the partners, government and designers are committed. They will take the rough with the smooth. This is a window into the future of Saudi Arabia.” 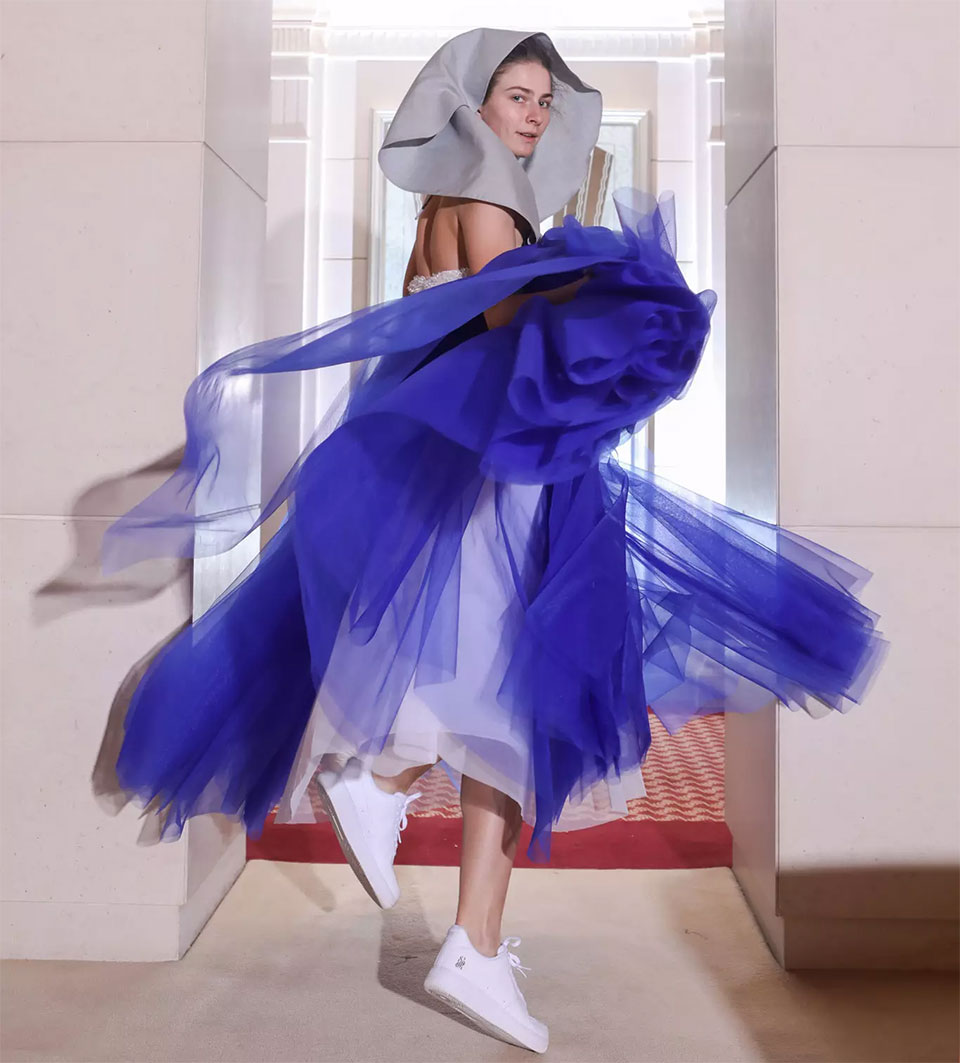 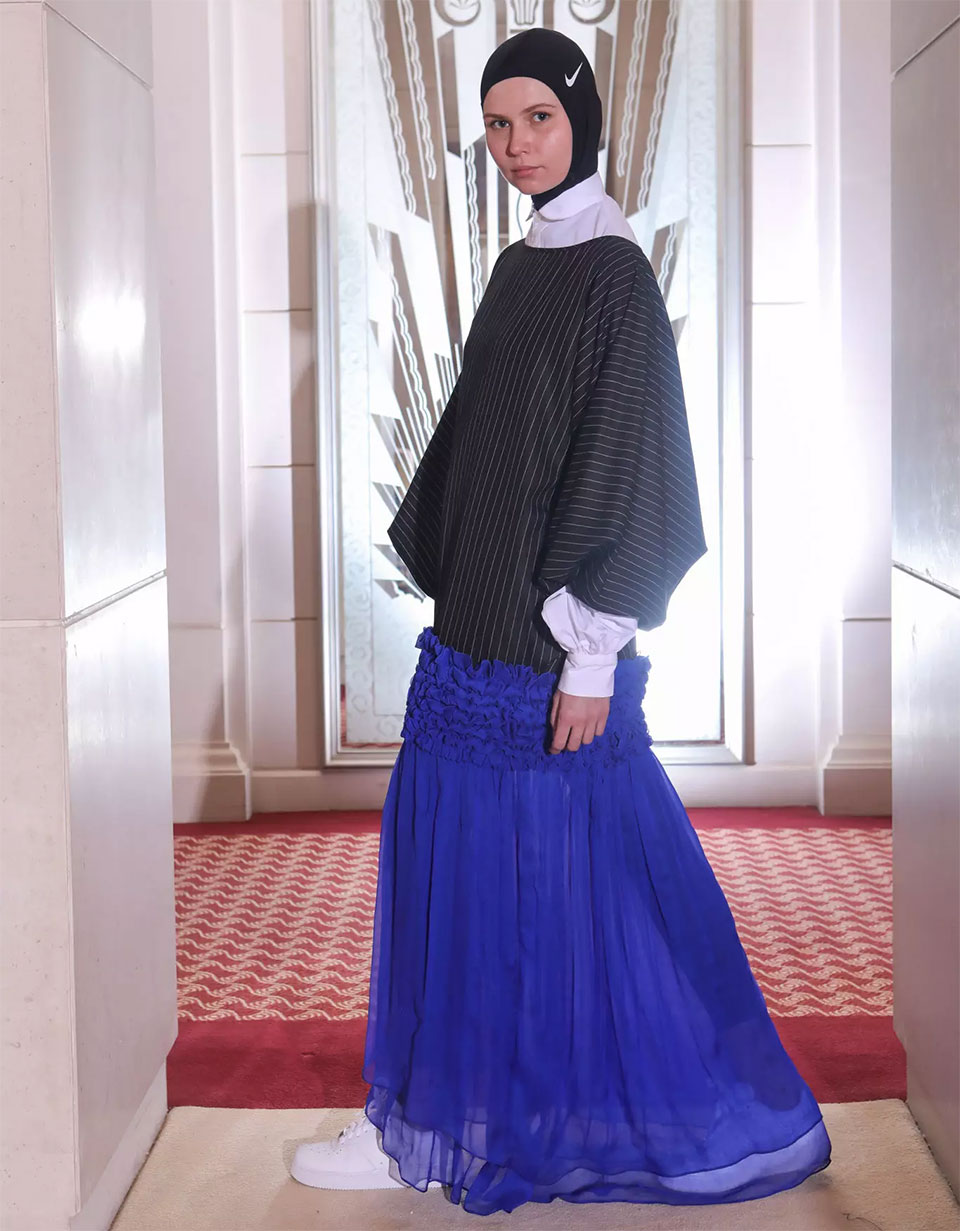 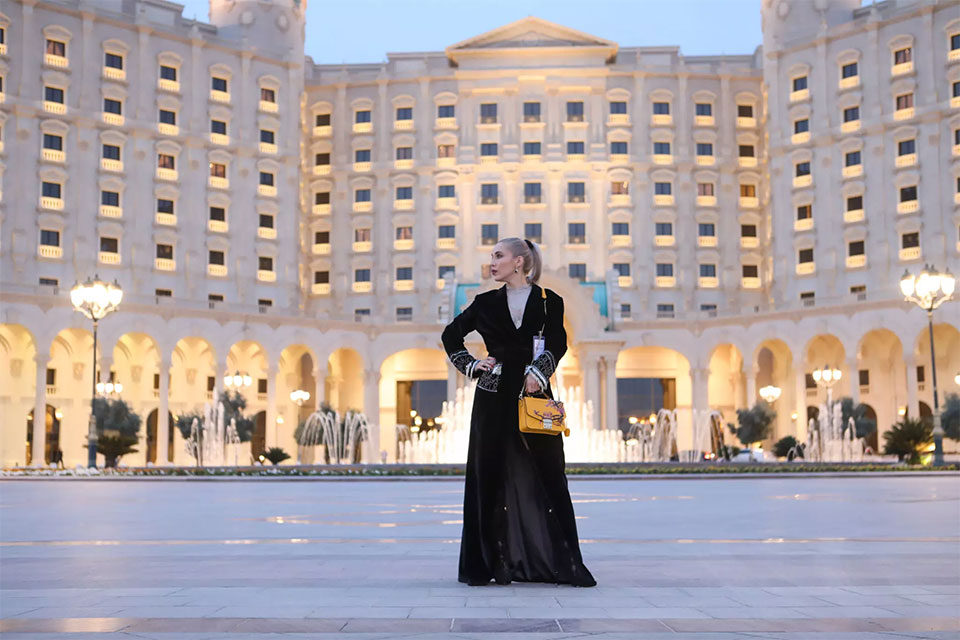 PYONGYANG, Feb 16: Roared on by a home crowd, South Korea’s Yun Sung-bin made history today. In an event that until... Read More...

MAHOTARI, April 6: A migrant worker was found dead in a toilet in his quarter in Saudi Arabia on Wednesday... Read More...

In pics: People celebrate Gaijatra in Sankhu
9 hours ago

After death of an elderly due to COVID-19, 14 of his family members test positive for virus in Morang
12 hours ago