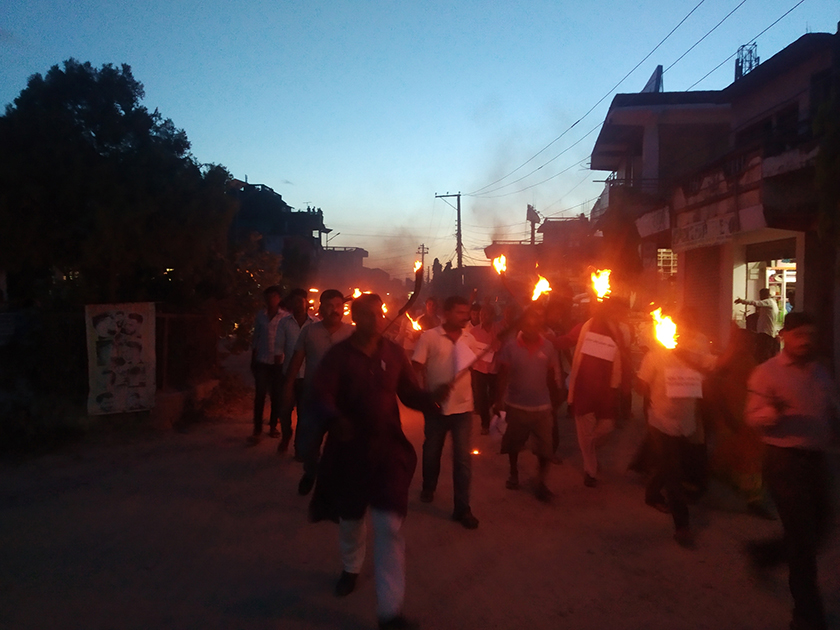 SARLAHI, July 4: The body of the youth who died in a police firing near Banke forest of Sarlahi and a child who drowned in a pit dug up near the Banke River have been kept at the District Hospital since three days. The family members of the deceased have refused to receive the body until their demands are addressed.

On Monday evening, an all-party meeting was organized in the District Coordination Committee under the chairmanship of Methur Chaudhary, coordinator of the DCC. While discussing on the issue, a debate ensued between the leaders of the ruling Nepal Communist Party (NCP) and the cadres of Rastriya Janata Party Nepal (RJPN).

Rewati Panta, district chairperson of NCP, released a press statement on Monday accusing RJPN leader as well as parliamentarian Pramod Sah of sensationalizing the death of the child who fell into the pit on Saturday. According to him, instead of resolving the matter through talks, leader Sah sensationalized the issue and invited one more death.

As mentioned in the release, when Mayor of Ishwarpur Municipality Manoj Devkota went to meet the family members of the victim, leader Sah prevented them from meeting anyone. Meanwhile, lawmaker Sah has also issued a press release stating that the allegations against him are baseless.

He says the locals had started protesting as the mayor did not take any initiative to talk to the victim's family and manage relief for them. "I was in Kathmandu but I reached here six hours after the incident. But the mayor despite being here visited the family only after two days," claims lawmaker Sah. Mayor Devkota was elected from then CPN-UML.

On Saturday, eleven-year-old son of Lale Ray of Ishwarpur Municipality-13 died after falling into the pit dug by a crusher plant in Banke River to extract construction materials. Following his death, the locals and family members had staged protest and obstructed the road in the district headquarters on Sunday.

A clash had erupted when police tried to resume traffic. During the clash, police had opened fire which killed 28-year-old Saroj Narayan Mahato of Gaurishankar and injured Raj Kumar Mahara, 21, of the same place.

Meanwhile, Nagendra Kumar Ray, lawmaker of the federal parliament as well as the district president of Nepali Congress (NC), stressed that the parties must make efforts to solve the problem instead of politicizing the sad incident.

"A child died after falling into a pit and a youth lost his life while protesting," said President Ray, adding, "Efforts must be taken to resolve the issue instead of blaming each other."

On Tuesday morning, the leaders and cadres of RJPN staged a protest in Gaurishankar by burning tyres and also staged a torch procession in Ishwarpur Bazaar in the evening against the decision of the all-party meeting held on Monday.