RAJBIRAJ, Feb 27: A series of murders and violent attacks continues in Saptari despite claims of tightened security by officialdom. The district has seen five murders in the past five months.

On Monday, an elderly couple in Kharchuiya Bazar was found killed, their bodies wrapped with clothing and set on fire. The deceased have been identified as Saburi Sah, 70, and his wife Bechani Sah, 65. The bodies were found at their residence in Khadka Municipality-5, Kharchuiya on Tuesday morning.

SP Rajendra Bista, chief of Saptari police, informed Republica that preliminary investigations indicate the couple was at first killed and their bodies then wrapped in clothing and burnt.

Locals had gathered outside their house when the couple did not open the door for the milkman, and they also saw smoke coming from the windows. They informed police. According to SP Bista, a forensics team and a police dog have been sent for investigations.

Plainclothes police are making inquiries with locals. The elderly couple lived by themselves in the house. Their two sons, who are both engineers, are currently outside the district.

As per the locals, the older son Satyanarayan is in Gaighat, Udayapur while his brother Tejulal is in Dharan.

Saburi, who was financially sound, used to provide loans to villagers. It is speculated that the murders may have resulted from a dispute over interest.

Similarly, On October 10, an unidentified group of about a dozen people killed Prem KumarYadav, 21, of Rajbiraj-1. He was the son of local Nepal Communist Party (NCP) leader Bhannalaya Yadav. And on December 16, a group of youths beat Parshuram Mishra, 25, of Tilathi Koiladi Rural Municipality-1 to death.

Mishra, who was a guard at the rural municipality office, had reportedly asked the group not to consume marijuana in the premises of the office. The youths turned on him and left him dead, according to family members.

Onlookers gather around the house at Kharchuhiya in Saptari on Tuesday morning where an elderly couple was found murdered, as police begin their investigation. The bodies were found burnt. Photo: Jitendra Kumar Jha/Republica 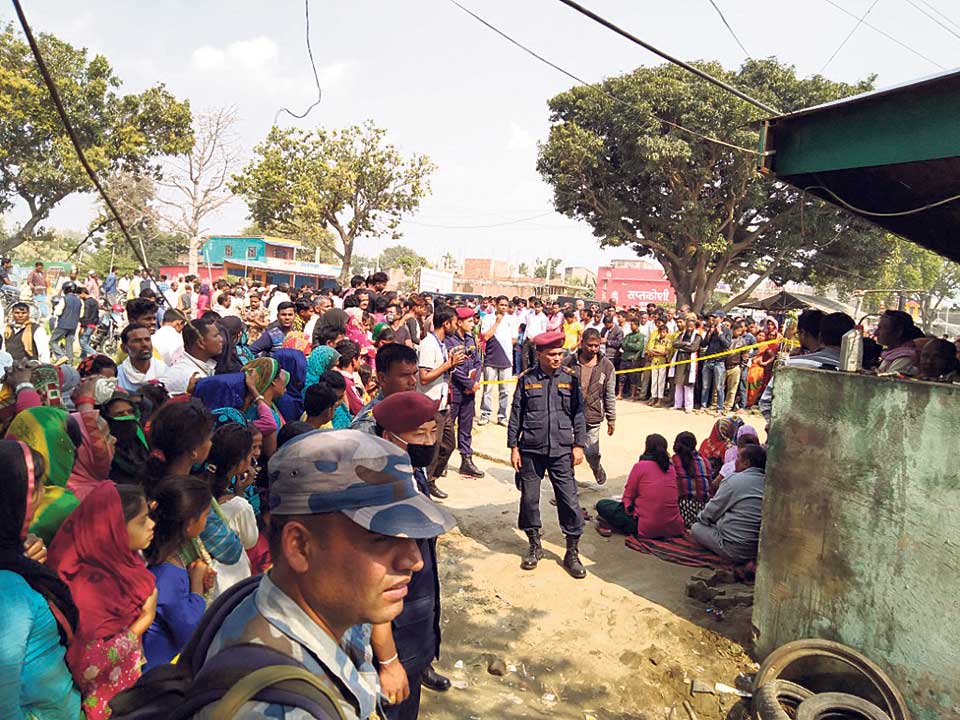 Two people were killed in an accident occurred when a Scorpio jeep knocked down a motorcycle at Birendra Bazar of... Read More...

Unlocking the lockdown
12 hours ago

Residents of Nabhi, Gunji and Kuti used to pay land revenue to Nepal until 2035 BS
11 hours ago

Residents of Nabhi, Gunji and Kuti used to pay land revenue to Nepal until 2035 BS
11 hours ago

How can we revive the energy sector post-COVID-19?
14 hours ago