Saptari in grief right after Chhat merriment: six of a family die in accident 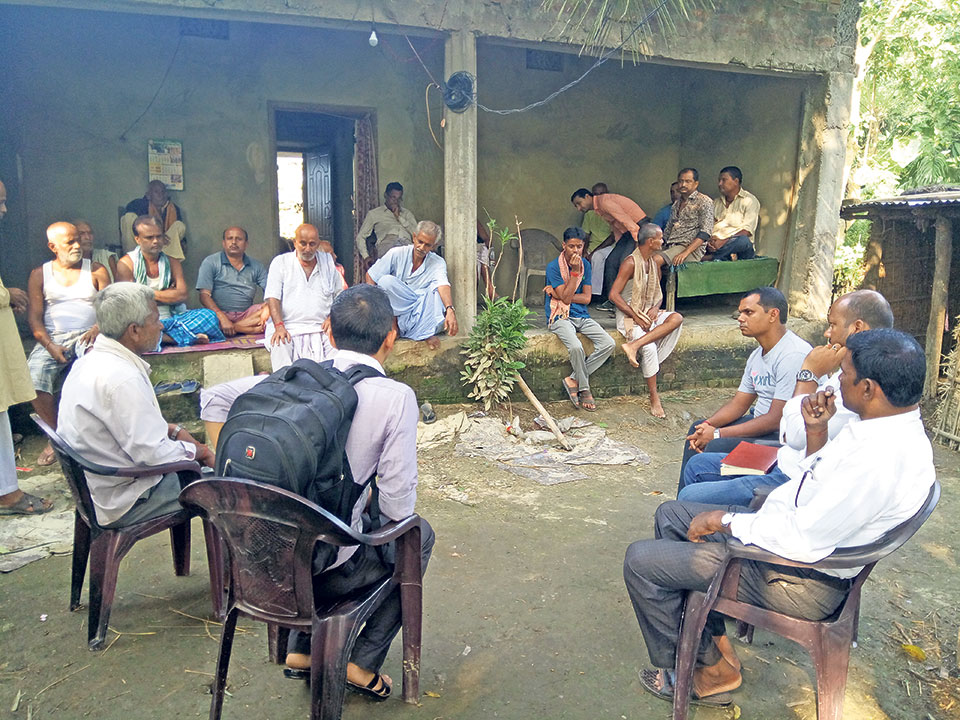 Locals gathered at the house of Ramanath Jha of Tilathi, Saptari on Saturday.

SAPTARI, Oct 29: The excitement of the festival of Chhat is not over yet and Saptari is mourning. As an ill-fated bus headed for the capital from the district skidded off and plunged into the Trishuli River in Dhading on Saturday morning, 31 people were killed, including six of the same family.

The family of Ramanath Jha, 80, lost its six members in the accident. After losing his sons, daughter-in-law and grandchildren in the accident, the octogenarian is just numb, unable to even cry. He had seen them off before they set off for the journey. He had given them blessings and hugged them before the family left. Two others from his family are still missing.

His two sons, Sanjit and Anjit, one daughter-in-law named Simi and a grandson Abhinav died in the accident. Apart from this, the brother-in-law and mother-in-law of Sanjit also perished in the accident. Sanjit's son Pratik, 3, and sister-in-law Puja are still missing, according to the Jha family's neighbor Dineshwar Mishra. Mishra is also the chairperson of Tilathi Koiladi Rural Municipality-1.

Sanjit was employed at the Chahabil branch of Nepal Bank Limited in Kathmandu. He started working just four years ago. His brother Anjit was a teacher at a private college in the capital. Locals said that the Jha family was struggling hard to make a good life. The two brothers were very hard working and gradually being successful in their respective fields. They would not have died if they had not come to the village for Chhat, the locals lamented.

“Why God is so cruel! Both the sons who were so sincere and hard working, who were the only hope of the family departed so early. It is a huge loss to the family,” noted a local woman Renu Mishra.
The old man Ramanath is a retired primary school teacher. The family owns two katthas of land and a small house.

Ramanath's middle son stays at home as he is mentally unsound. According to Saptari Police Chief Mukesh Kumar Singh, at least 20 of the deceased are from Saptari alone.

DHANGADHI, Aug 21: Two people died in a road accident that took place at the Khanidanda road section along the... Read More...