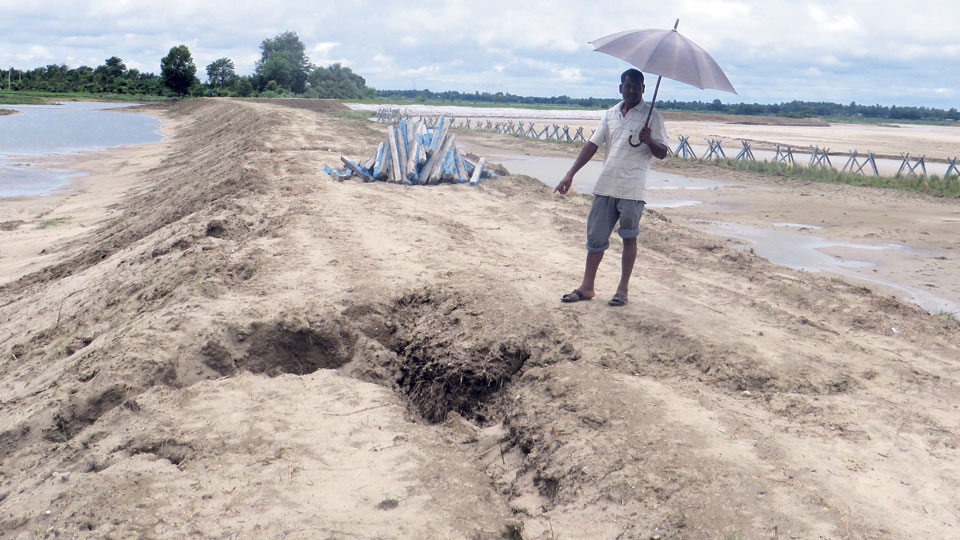 Treasurer of Embankment Construction Consumers Committee for Chahaka River, Jharilal Chaudhari, shows the place where an embankment built by the Water Induced Disaster Control Office through contractors and the consumer committee on Sunday, in Saptari. Photo: Mithilesh Yadav/Republica

SAPTARI, July 10: During Prime Minister Sher Bahadur Deuba Friday's visit to flood hit areas in Saptari district, former Minister for Irrigation, Umesh Yadav complained to him of massive embezzlement in the construction of embankment and demanded investigation into it. In response, the PM pledged to form a parliamentary committee to look into the matter.

Prior to delivering his speech, Deuba had inspected the Mahuli River embankment near Bhediya area. Parts of the embankment were damaged by floods because of which flood inundated nearby settlements.

The embankment was constructed this fiscal year only. And it was not been able to stand even its debut monsoon flood. “The embankment's inability to withstand not even its first monsoon itself clearly exhibits the quality of its construction,” Yadav told to the PM.

Later, Yadav told Republica that he is hopeful of the PM taking appropriate actions against those involved in the construction of the embankments. “We have handed over a memorandum to him requesting inquiry into the matter. We believe that he will take actions against those involved and address the problems we face every year from the flood,” he said.

Yadav informed to Republica that the government had released a budget of Rs 450 million for controlling floods in the district. The budget was released through Water Induced Disaster Control Office of Saptari and the office of Khado River Flow Control.

“There has been systematic embezzlement. From the top to the bottom, the funds for constructing the embankment have been embezzled. That is why such a poor embankment was built,” he alleged. He alleged concerned engineers, monitoring officers, and other officials related to the project of involvement in the embezzlement.

“If the concerned officials including the engineers and monitoring officers would have done their job of constructing, inspecting and evaluating the construction process, do you think the embankment would have given away in the very first push of the flood?” he questioned further adding that “funds meant for building the embankment were embezzled and an embankment was made for namesake.”

Locals have no different opinion. They state that that the materials used in constructing the embankment were of very poor quality. While it was still under construction, stakeholders had even protested against it. However, those concerns were not taken seriously by the concerned authorities, Yadav said. The contractors and concerned official's wrong-doing came to the fore only after a number of villages were flooded, he added.

The Embankment Construction Consumers Committee entrusted with the responsibility to overlook the construction is also being accused of being part of the irregularities. However, its officials deny any wrong doing. Treasurer of the committee, Jharilal Chaudhari of Surunga Municipality - 2, denies involvement in the irregularities.

“We only issued payment cheques to the contractors after their work was approved by the concerned engineers. We do not know anything,” he said further adding that “When we asked for detailed report of the work, we were not given that,” he added.

“Every time we requested for details, the engineers would shout at us and dismiss the matter. Even after the work was completed, we were not given the project details,” Chaudhari states.

Even though he himself was the treasurer of the committee which was supposed to keep every detail of the construction work, Chaudhari was never given information by the contractor. “I used to go and inspect the embankment but as a layman I had no knowledge of how things should be. Even when I inquired, I was not given any information,” he stated.

According to Chaudhari, it is not the issue of the single embankment. There are other embankments in the district that are almost constructed equally poorly, he said. “So far every embankment we have seen has not lasted a single monsoon. They are damaged the very year of their construction. We have seen such conditions almost everywhere across the district,” he said.

Recent floods in the district have affected around 1,500 houses. The displaced have been forced to live without proper shelter and food. Even though the government promised quick relief, little of the promise has been delivered, former minister Yadav said.

“Every time our settlements are flooded, our houses are destroyed. It takes years of working to bring the house back to shape. And despite compensation promises, the government never provides the support,” he said informing that the some houses damaged by floods in the past are yet to receive compensation from the government.

Former minister Yadav informed that the engineers involved in the construction of the embankment have not responded to their queries. “They are now under scrutiny but they have not responded to our questions. But we are hopeful that concerned authorities will investigate their involvement in the embezzlement,” he said.

Ram Naresh Mandal, chief at the Water Induced Disaster Control Office, Lahan claimed that the embankment was made according to government standards. “It was made very strong, but the force of flood was stronger than it was supposed to withhold. So, it was damaged by the floods,” he asserted.