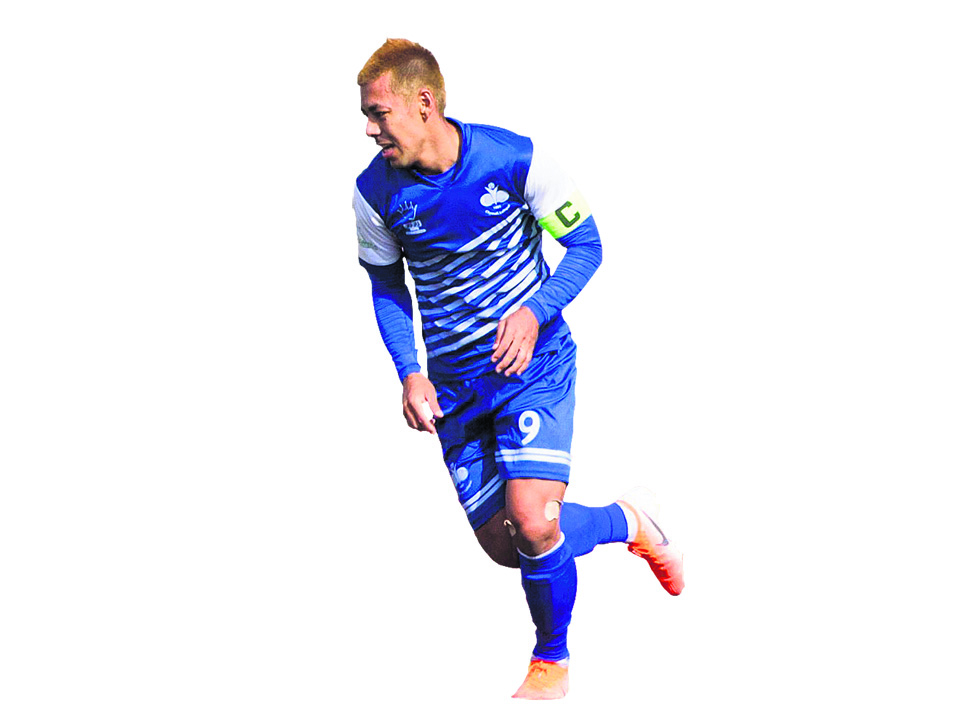 KATHMANDU, Dec 25: When Chyasal Youth Club takes on the New Road Team (NRT) in the third round of the ongoing Qatar Airways Martyr’s Memorial A-Division League on Tuesday, former national team forward Santosh Shahukhala will have a new record to break.

After Machhindra plays against Friends at the All Nepal Football Association (ANFA) Complex in Satdobato to kick start the third round, Chyasal will face NRT at the Dasharath Stadium which will feature Santosh who has scored a total of 99 league goals. He will have a century of league goals on his mind.

Santosh, who has been a league regular since the 2003 edition, has already taken his total tally to 99 goals as he bagged three goals in the first two games this season.

Santosh started football with a passion he inherited from of his elder brother Bal Gopal, who is the head coach of the Chyasal-based club.

Santosh scored two goals to guarantee a first win for Chyasal this season with a 2-0 drubbing of Sankata, while he added one more against Machhindra in a 1-1 draw to get a point for the team. Chyasal is on the second position currently.

With a brilliant positional play and good movements inside the box, Santosh was able to make a difference in the game as he scored the first goal to take a lead against Machhindra.

With his good performance in both the games, Chyasal is unbeaten and is aiming for the title this season, or at least the head coach Bal Gopal is.

Santosh was with the Nepal national football team when Nepal played a 2010 FIFA World Cup Qualifying match with India 10 years ago.

After that, there have been major ups and downs in Santosh’s national team career as he failed to make into the team. However, his passion and hunger in football has been transparent with the form he is in.

When the league was not held for five years since the 2012 earthquakes, he decided to leave for Japan, which he says was fruitful for his career. He stressed on the importance of fitness.

“Fitness and diet are crucial for a player. The technical aspects are also equally important,” Santosh added, “The Japan stay has shown me the way to become a player.  Regular hard work is a strong aspect of a player.”

If stars are on his side, it is possible that Santosh, who scored his 99 league goals with his opener against Machhindra, will complete a goal century on Wednesday. It would be a thing of pride for a Nepali player since no one has been able to complete that feat.

Santosh, who spent over two decades in football, said that he is very happy with the achievement. “When my senior footballers scored 50 goals in their career, I had a thought whether I could match the feat. I am very happy that I am now next to scoring 100 goals.”

Bal Gopal, who took over Chyasal this season, praised his younger brother of how good he is in the number nine role.

“There are only a few player who are as good as he in the number nine role,” Bal Gopal, whose brother had been missing for a few years from football after giving some prolific performances in the prime, added. “Santosh has become more mature with the Japan stay. He is very knowledgeable on how to play physically and technically.”

Shahukhala, who spent most of his playing time with Three Star Club, has scored a total of 71 goals for the team. With that, he is also the highest scorer in the league for the club.

He scored another 16 for Manang Marshyangdi Club and six for the Armed Police Force (APF) Club.

He added three goals last season and with the three this season, he is only one shy away from a proud Nepali football history.

Myagdi district is self-sufficient in oxygen
22 hours ago