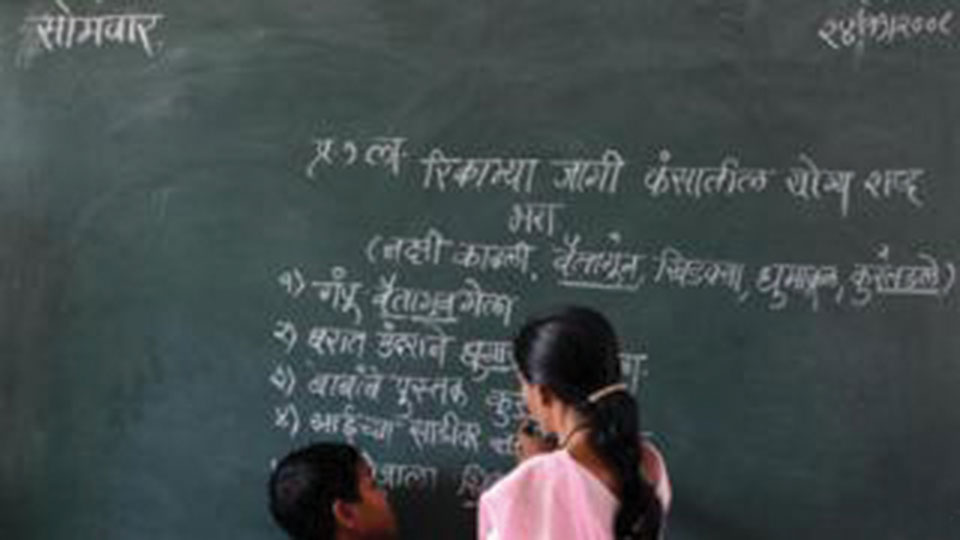 In the past, untouchables were not allowed to read and write Sanskrit. Sanskrit was considered to be the subject meant only for Brahmins. The situation has not changed

It was reported on May 31, 2018 that Bikash Karkidholi, eight years old, was not admitted in Shree Krishna Dwarpayan Gurukul Bedbidhya Asharam in Bhadrapur, Jhapa because he was a Dalit. I wanted to know if all Sanskrit schools are denying admissions to Dalit children. I went to Bhagwat Sanyas Ashram located at Ram-Mandir site in Pashupatinath temple premises. The school principal informed me that only Upadhyay Brahmins can join this school. “We do not allow Dalit students in this Ashram,” he said.  Pashupati Bikash Kosh also offers Sanskrit education at Nepal Ved Bidhya Ashram but Dalit students are not allowed there.

In the process of inquiry, I had been to Swargadwari Ashram located in Pyuthan district. It also does not allow Dalits students.  When I asked why the authority said Dalit and Janajati students cannot properly pronounce Sanskrit words and so they are not allowed in this school.

Why this discrimination? Why are Dalits not allowed to take Sanskrit education? We have to look into Manusmriti to find the answer. Manusmriti clearly mentions “He who instructs Shudra pupils and he whose teacher is a Shudra shall become disqualified for being invited to a Shradha”. It says that Shudras should not read Vedas and if a Shudra preaches religion to Brahmins, he will be punished.

Dalits face discrimination in all schools but it is more intense in Sanshkrit schools. In other private and public schools, Dalits drop out earlier because of the discrimination they face at the hands of peers and teachers. Dalit students are often alienated in their classrooms. They are made to sit separately on occasions like Sarashwoti Puja.

According to Human Rights Situation of Dalit Community in Nepal, literacy rate of Dalits (6 years and above) is 52.4 percent compared to the national average of 65.9 percent. Only, 24.7 percent of hill Dalits and 11.8 percent of Tarai/Madhesi Dalits complete eighth grade. Dalits comprise only 1.6 percent of those with SEE and above degree. Only 0.8 percent are with Bachelor’s degree.

The New Civil Code has stated that no person shall be discriminated based on custom, tradition, religion, culture, ritual, caste, linage, community, occupation, business, physical condition and that there shall be no caste-discrimination. It says that the person who practices such discrimination shall be punished with three years of imprisonment or Rs 30,000 fine or both.

Even despite the new law, cases of caste-based discrimination are being reported and the government authorities have not been seen to take any action against the perpetrators. Even today Dalit children have no access to Sanskrit education.

Back in the past, untouchables were not allowed to read and write Sanskrit. Sanskrit was considered to be the subject meant only for the Brahmins or kings. The situation has not changed. Even today monopoly of Brahman priests and teachers exists.

Thanks to the printing revolution, Sanskrit books and scriptures are available in Nepali, Hindi, English and other languages of the world. Interested ones can find these books and read.

Sanskrit is perhaps the oldest language in the world. Classical Sanskrit which developed from the Vedic era was dominant language from about 500 BC to about 1000 AD. Sanskrit was considered as Dev Bhasha, the language of Gods. The corpus of Sanskrit literature encompasses a rich tradition of poetry and drama as well as scientific, technical, philosophical and religious texts. Sanskrit continues to be widely used as a ceremonial language in Hindu religious rituals and Buddhist practice in the forms of hymns and mantras.

Dalits must not be deprived of exploring this vast world of knowledge, which can be possible through Sanskrit language.

The author is sociologist by profession and women empowerment self-defense trainer
girithezorba@gmail.com

If you were to look up the meaning of “guru” in Sanskrit, it means “the one who dispels darkness and... Read More...

DOLPA, Jan 6: There were days when the Dalit people of Dolpa had to walk for three long hours to fetch... Read More...

JUMLA, Dec 27: An incident of practice of 'untouchability' within the dalit community itself has come to light at Haku... Read More...

“Mr Prime Minister, how would you feel if you didn’t get a kidney ahead of transplantation?” (with video)
3 hours ago

Where to contact if someone needs Remdesivir?
13 hours ago
Sagarmatha sees first deaths of 2021 expedition
11 hours ago