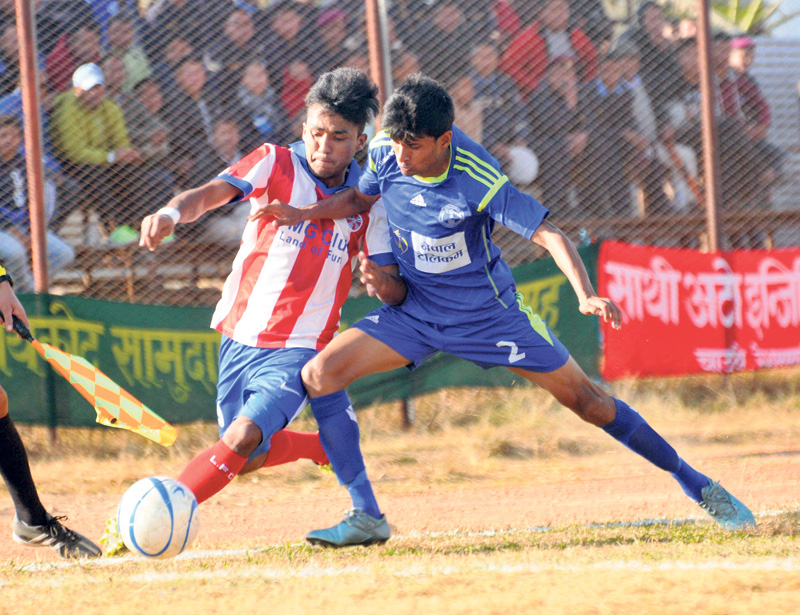 Rabin Shrestha (R) of Nepal Police Club vies for the ball with a players of CMG Club sankata during their match of the 15th Aaha-Rara Gold Cup football tournament at the Pokhara Stadium in Kaski on Friday. Photo Courtesy: Sudarshan Ranjit

POKHARA, Jan 21: CMG Club Sankata came from a goal down to send Nepal Police Club packing home with a 2-1 victory in the ongoing 15th Aaha-Rara Gold Cup football tournament at Pokhara Stadium in Kaski. With the victory on Friday, Sankata booked a place in the quarterfinals.

Anil Gurung netted three minutes from time for Sankata as it edged past the five-time champion Police in the first round. Police, one of the most successful teams of the tournament, was sent packing in the last edition as well after a 2-0 defeat against Jhapa XI. This is the third time in a row that Police made first round exit from the tournament.

Sankata will now take on Farashganj SC of Bangladesh in the last eight clash.

On Friday, Police took the driving seat in the 35th minute after Ravi Paswan's right flank cross entered the back of the net despite goalie Binay Shrestha's attempt to deny it.

Police, however, failed to maintain the one-goal cushion as Bishwar Adhiraki hit back the equalizer in the 64th minute. Bishwa converted with a curling freekick from 30 yards. He was later declared the man-of-the-match.

Anil, the 61st minute replacement of Sushil KC, netted the decisive goal in the 87th minute as the match looked to be heading to extra time. Anil capitalized on a rebounder of Police goalie Dipesh Yadav in his bid to deny Bishwa's strike.

Both the teams created some scoring chances but failed to utilize them on most of the occasions. Sankata came up with improved show after the break.

Police created scoring chance in the 74th minute but Buddha Lama's strike in Tirtha Rana's cross failed to achieve the target. Police coach Kumar Katuwal expressed dissatisfaction toward his team's performance after the break and expressed frustrations over his side's poor performance of late.

“The boys could not play in a similar way as way they did in the first half. The performance was very weak after the break. I am not satisfied with the performance of the team,” he said. “We lack quality players and the level of the team has gone down. It has been only two months since I took over the team. It will be a tough job to take the team to its previous level.”

He also criticized his goalkeeper and the team's defense.

Sankata wasted scoring chance in the second minute of the first-half injury time. Diepsh Shrestha's strike rebounded off the crossbar and later Bishwas Shrestha hit high above the bar wasting another scoring chance.

Sankata coach Salyan Khadgi said that his side had to wait until the second half for the goal after it lacked coordination in the first half. “Our strategy of changing players paid off and every player fulfilled his duty properly,” Khadgi said.

POKHARA, Jan 19: An extra-time goal from Deepak Rai turned out to be decisive as Dharan Football Club registered a 1-0... Read More...