KATHMANDU, Dec 14: Sankata Club has climbed up to the second place defeating Himalayan Sherpa Club 2-0 in the ongoing Martyr’s Memorial A-Division League in Lalitpur on Thursday.

Two first-half goals from Sankata was enough to register its seventh win in the tournament.

At the All Nepal Football Association (ANFA) Complex in Satdobato, goals from Cedric Aba and Deepesh Ale Magar helped the winning cause for Sankata.

Aba got a long pass from his midfielder and beat two defenders on his way to score the first Sankata goal in the 12th minute. Magar doubled the team’s lead after just two minutes as Himalayan defender failed to clear the ball properly and he scored from that chance.

Himalayan Sherpa, who had started its league campaign with some good results, has not been able to play well in the recent times. Himalayan tried to create some chances, but failed to convert them against an attacking Sankata team.

Sankata played defensively in the second half after scoring two first-half goals. Himalayan Sherpa bettered its first-half performance by opting to play attacking and dominated the period, but could not score any goals.

Sankata head coach Salyan Khadgi said that his team played defensive football in the second half to maintain its lead.

“We had set the tactics to take the lead in the first half and play defensive football in the second. The tactics was successful and the game went as we wanted it to,’’ Khadgi said. “We have been playing every game for a win, despite our target which is to finish in the top five. It has been working well. We always try to play to get good results.’’

Himalayan Sherpa head coach Subash Limbu said that the team had to face defeat as it could not score despite playing good football.

“The most important thing in football is goals. Despite playing well in the game, we could not convert the chances we created. They took the lead and played defensive football and hindered our goal scoring chances,’’ Limbu said. “It has been proved that just playing well doesn’t give you wins. Sankata’s strong defense line did not give our forwards any chances.’’

Manang Marshyangdi Club is still top of the table with 21 points and a game in hand, while Sankata is second with the same number of games. Himalayan Sherpa has 11 points and is at the sixth place.

Likewise, on the same day, Jawalakhel Youth Club stunned the departmental team Armed Police Force (APF) Club 1-0 in its own stadium. Doumbia Lawala’s 49th minute goal sealed the win for Jawalakhel. Doumbia scored from the free-kick to give the lead.

This is Jawalakhel’s second win of the league season.

APF has 10 points from eight matches and is at the eighth place, while Jawalakhel climbed up to the 10th place with seven points.

In the first match played in Satdobato, Saraswati Youth Club piled extra pressure on struggler New Road Team by defeating the bottom side 1-0.

A spot-kick goal from Victor Imobi in the 73rd minute won the match for Saraswati, who has now won three games.

New Road, who fielded its team for a win, could not convert the chances it got and lost yet another match.

Saraswati is ninth with nine points, while New Road is at the bottom of the table with one. 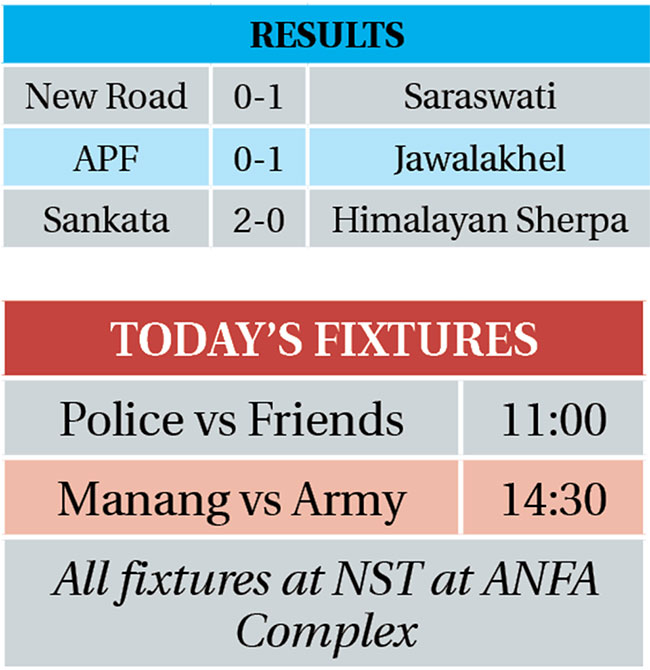