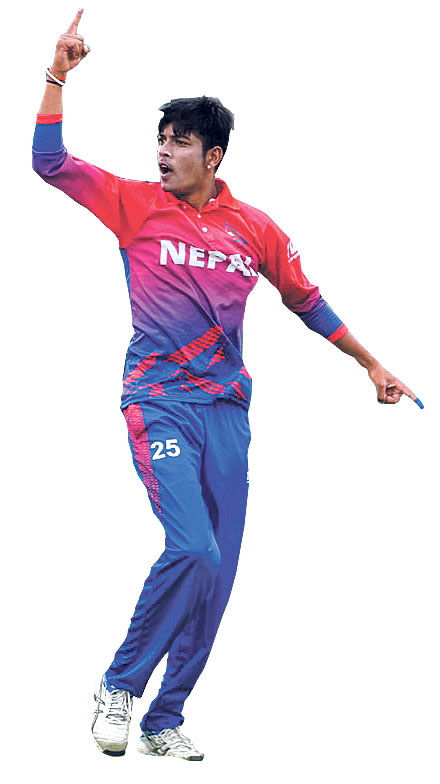 KATHMANDU, March 3: Caribbean Premier League (CPL) outfit St. Kitts and Nevis has snapped up Nepali teenage sensation Sandeep Lamichhane for the 2018 season. The globe-trotting career for the 17-year-old continues as he will become first Nepali player to play in West Indies’ premier T20 event. He was signed up during the CPL auction in London for a fee of US$ 5,000 on Thursday in Round 13 of the draft pick.

Leg-spinner Lamichhane became first Nepali to be bought by Indian Premier League (IPL) outfit Delhi Daredevils sending the online and social media into frenzy. He has now become first Nepali player to be auctioned not only in India but also in CPL.

He represented in the senior team as a 15-year-old in November 2015 against a touring Marylebone Cricket Club (MCC). During the tournament he impressed his opponents so much so that he was invited to play in Hong Kong, where he was noticed by former Australia captain Michael Clarke. An admiring Clarke then invited him to spend the following Australian summer playing club cricket in Sydney.

He represented Nepal in the U-19 World Cup in 2016 where he impressed the judges and the media experts all around the world. British Broadcasting Corporation (BBC) compared him with renowned Australian bowler Shane Warne for the turns his deliveries got during a match against Pakistan in World Cup. Shortly after, he was roped in for the national team, when he was 16.

Lamichhane won player-of-the-series award in ICC World Cricket League Division Two tournament held last month. He played a vital role in Nepal’s second place finish taking most wickets in the competition and propelling his nation to ICC Cricket World Cup Qualifiers scheduled to start on March 4. He is set to face host nation Zimbabwe on Sunday to kick-start the qualifying tournament for 10 teams. Nepal is seeded in Group B along with the host team, Scotland, Afghanistan and Hong Kong.

Lamichhane wasn’t the only 17-year-old leg-spinner to earn a CPL contract on Thursday, with Afghanistan’s Qais Ahmed signed up as well despite having played just one Twenty20 in his professional career to date, although he did impress many judges at the Under-19 World Cup.

The six CPL teams were warned off signing players from Afghanistan and England as both countries have fixtures while the August 8-September 16 event is in progress. But such has been Afghanistan’s rise as a cricket nation that even players likely to be international reserves are attracting franchise attention.

Meanwhile, West Indies’ Lendl Simmons and New Zealand batsman Martin Guptill were among those to fetch the biggest bids in the CPL draft, with Chris Gayle. Andre Russell returned from a one-year doping ban for a whereabouts violation. Dwayne Bravo and Sohail Tanvir also attracted the maximum price of US$ 160,000 by their respective franchises.

September 24, 2016: Played for Western Suburbs Districts Cricket Club in Australia after an official call up by Michael Clarke in Sydney grade cricket 2016/17 season.

July 25, 2017: Made new Nepali record for Most Wickets in an International Tournament (24 wickets in 6 matches) ICC U-19 World Cup Asia Qualifiers in Malaysia.

Sujita death case: One arrested for ‘abetting’ suicide
22 hours ago