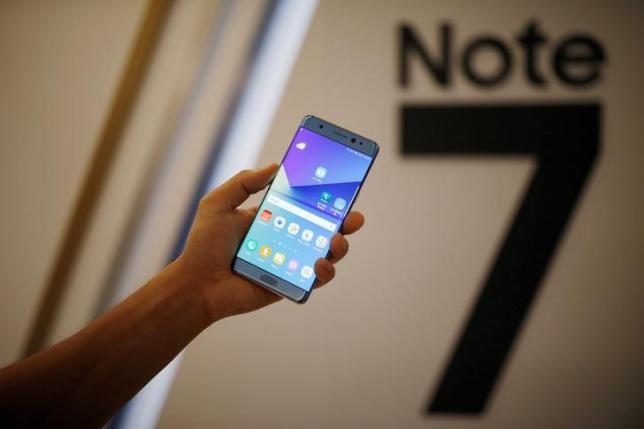 Samsung Electronics Co Ltd on Saturday urged users of its Galaxy Note 7 phones to turn in their handsets as soon as possible as part of a recall aimed at limiting the damage caused by the fire-prone devices.

The world's top smartphone maker said last week it would exchange all Note 7 phones in 10 markets including South Korea and the United States, a costly setback for a company that was counting on the 988,900 won ($892.73) model to bolster sales momentum as rivals such as Apple Inc launch new devices.

Reports that the phones' batteries have combusted while charging or in normal use prompted the U.S. Consumer Product Safety Commission to stop using the Note 7 device.
Aviation authorities and airlines across the world have also issued bans or guidelines prohibiting passengers from turning on or charging the phone inside airplanes in response.

"We are asking users to power down their Galaxy Note 7s and exchange them as soon as possible," Koh Dong-jin, head of Samsung's smartphone business, said in a statement.

"We are expediting replacement devices so that they can be provided through the exchange program as conveniently as possible and in compliance with related regulations," the statement added.

For Samsung, which prides itself on manufacturing prowess, the scale of the recall is unprecedented and deals a huge blow to its reputation.

Some 2.5 million of the premium devices have been sold worldwide that need to be recalled, the firm has said, and some analysts say the recall could cost Samsung nearly $5 billion in lost revenue this year.
The Korean company is offering to exchange all affected Galaxy Note 7 phones with a replacement device using a safe battery. Samsung has said replacement Note 7s will be available in some markets including South Korea and the United States from Sept. 19.

Samsung said on Friday it plans to resume sales of new Galaxy Note 7 devices in Australia in early October, but it is not clear when new sales will resume in other markets.