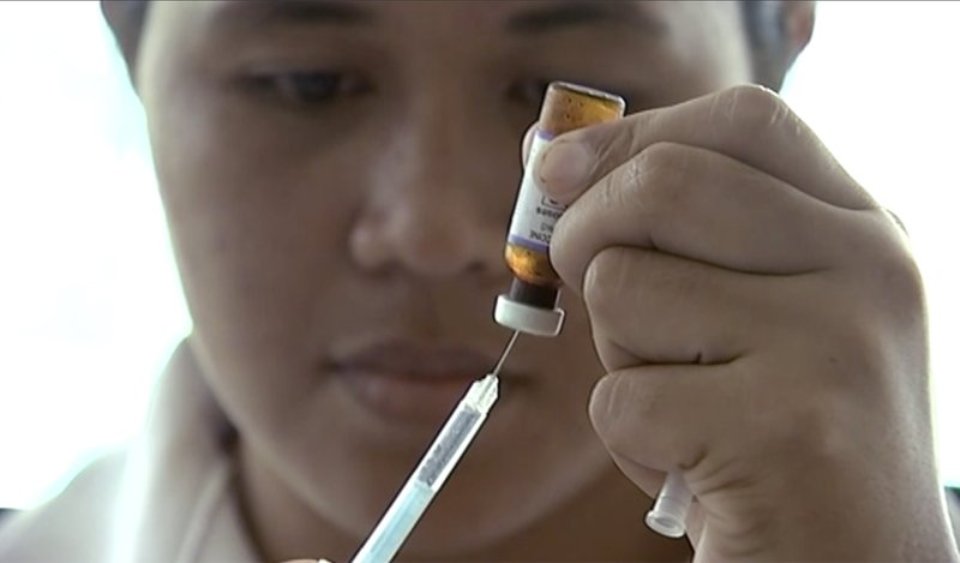 In this image made from video, a New Zealand health official prepares a measles vaccination at a clinic, Monday, Nov. 25, 2019, in Apia, Samoa. Authorities said Monday that a measles epidemic sweeping through Samoa continues to worsen with the death toll rising to 25, all but one of them young children. (Newshub via AP)

WELLINGTON, New Zealand, Nov 25 : Authorities said Monday that a measles epidemic sweeping through Samoa continues to worsen with the death toll rising to 25, all but one of them young children.

“We still have a big problem at hand,” Samoa’s Director General of Health Leausa Take Naseri said in a video statement.

He said more than 140 new cases of people contracting the virus had been recorded within the past day, bringing the total to about 2,200 cases since the outbreak began last month. He said there are about 20 critically ill children who remain in hospital intensive care units.

Samoa declared a state of emergency nine days ago, closing all its schools, banning children from public gatherings and mandating that everybody get vaccinated. Teams of people have been traveling the country administering thousands of vaccines.

The government also shut down a private clinic and is investigating how hundreds of vaccines were taken without authorization and then sold for a fee.

The median age of those who have died is 13 months, according to government figures. The deaths include 24 children under the age of 5, 11 of whom were infants under 12 months. The other person who died was in their 30s.

In all, 679 people have been admitted to Samoan hospitals with the disease, accounting for two-thirds of all recent hospital admissions. A majority have been discharged, with about 183 remaining in hospitals.

“These hospitals are not designed to deal with this,” Dr. Scott Wilson told Newshub in the capital, Apia. “The minute you get hospitals running at 200 to 300 percent capacity — I think it speaks for itself. It’s incredibly serious.”

Figures from the World Health Organization and UNICEF indicate that measles immunization rates among Samoan infants have fallen steeply from over 70% in 2013 to under 30% last year.

Tonga, Fiji and New Zealand have also reported outbreaks of measles but on a smaller scale than in Samoa. American Samoa, which has declared a public health emergency, is requiring that travelers from Samoa and Tonga prove they have been vaccinated or are immune from measles before being allowed into the U.S. territory.

LAMAHI, April 28: A measles outbreak has been reported in Rajpur rural municipality of Dang district. More than 50 children... Read More...

MAHOTARI, June 19: Security experts have pointed out that security situation in Mahotari district has worsened over the last two... Read More...

KATHMANDU, Feb 9: With dust pollution consistently worsening over the last couple of months and posing a serious health hazard for... Read More...

Differences between the couple after engagement
9 minutes ago