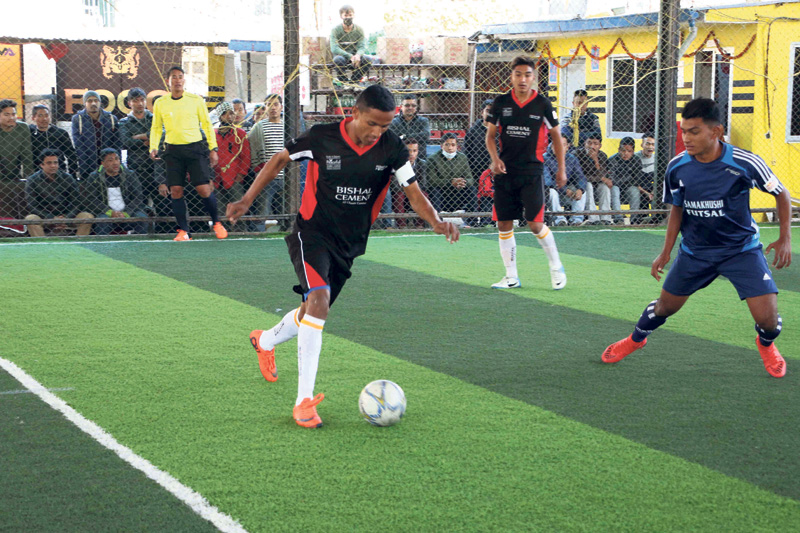 Players of Kumari Futsal (black) and Samakhushi Futsal in action during their match of the Red Bull National Futsal Leaque in the capital on friday. Photo Courtesy: NSC

KATHMANDU, Dec 10: Samakhusi Futsal has reclaimed top position of Group B in the Red Bull National Futsal League on Friday after 8-4 win over Kumari Futsal in a game played in the capital.

Playing at its home turf, Santosh Tamang netted three goals for Samakhusi while Nabin Lama added a brace. Saurav Magar and Shyam Nepali were also on targets for the winning team while it was also gifted by an own goal. Abhishek Rijal scored twice for Kumari while Rupesh Chhetri and Dikesh Khagdi were also on target for the team.

Following the win, Samakhusi moved on top of group B with 26 points, two points ahead of second placed Kumari after playing equal 12 matches.

In another match, home team Kick Off Futsal registered a thumping 8-1 win over Rajani Futsal and moved three point clear in group A. Rajin Pandey and Umeed Chhetri were on double for Kick Off at its home turf in Sitapaila. Prabesh Joshi, Rajesh Kunwar, Ashish Tamang and Aruj Singh added one each. Abin Thapa scored the consolation for Rajani.

Following the outcome, Kick Off has accumulated 31 points from 13 matches played while Rajani is sixth with 12 points after playing equal matches in group A. Second place occupier Baneshwar Recreation Center with 28 points holds a match advantage over the leader.

Task force meeting: Either party to claim for top position in province

KATHMANDU, Jan 14: The meeting of the joint task force of CPN-UML and CPN (Maoist Center) has discussed the potential... Read More...