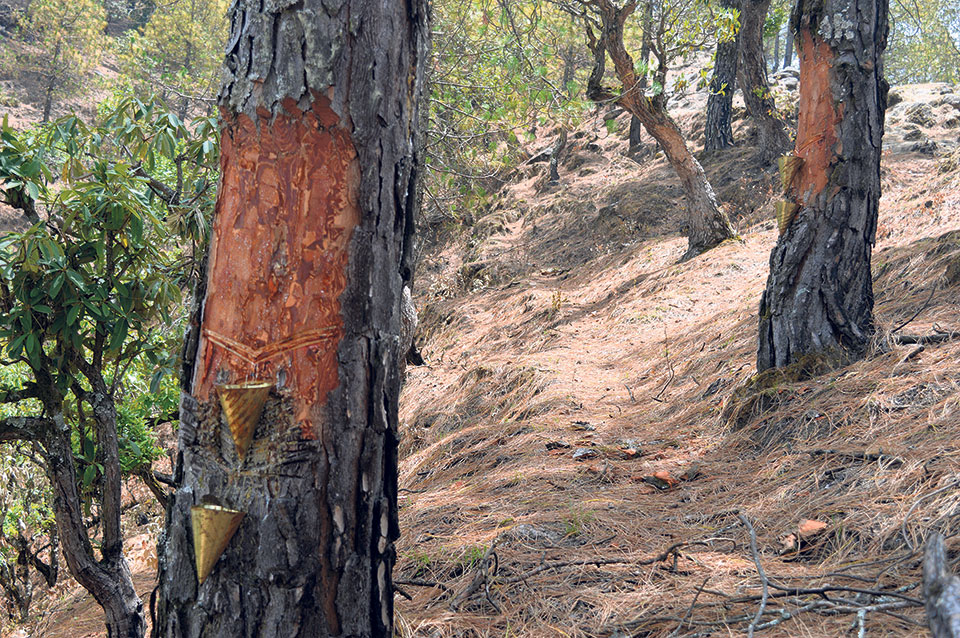 Cups placed on pine trees to collect resin in a forest in Dadeldhura district. Photo: Republica

DADELDHURA, Aug 15: Salleri forest is fast drying up due to resin collection against the set standard. Forest officials have been allegedly extracting resins in collusion with some companies against the limit set by the law.

The locals argue that the companies cannot extract resin unless forest officials and community forest members give them a nod. While the forest is spread across 120 hectare of land, ‘salla’ (pine trees) occupy 30 hectares.

“Salla’ is the life of the forest and if it dries up, the forest will die,” locals lament.

“They are doing it since long. There could be many uses of the resin, or else why would they collect it? But if trees are extracted excessively this way, this forest will die,” said a local requesting anonymity.

“We know that there is the involvement of forest officials in this. There are companies which want to collect the resin and they give a certain portion of their income to the forest officials. Even some members of the community forest get their share from the illegal work,” he added.

According to him, collection of resin from the trees has become rampant in the recent days. “Since the monitoring body itself is involved in it, there is no one to save the trees,” he noted.

“You can have a look. Those trees are actually drying up, they are dying. How can you inject life on those trees when you extract resin excessively? This forest is in the hands of criminals,” he fumed.

According to the locals, collection of resin is not a new thing. They say they have seen it since their childhood, probably since the 1980s. However, the extraction was never carried out in such a massive scale as of now.

Dan Bahadur Bhandari, chairperson of Samaiji Legi Community Forest, informed Republica that the community forest user’s group has put a ban on collection of resin from this fiscal year.

The users’ group decided to curb such activities in view of the fast drying up ‘salla’ trees.

“We are quite vigilant. We want to make sure that no one carries out this misdeed. The trees are drying up. We have to be careful,” he said. “We have already put a ban on collection of resin from ‘salla’ trees. We will take strong action against such activities no matter who is involved,” he added.

However, when asked about the allegations about the involvement of the community forest members themselves, Bhandari did not comment much but said that the committee will take action against no matter who collects resin from the trees.

“We can confirm that the trees are being destroyed. Taking out resin from the trees excessively kills them fast. But without thorough investigation, it cannot be said who is involved,” he said.

The District Forest Office, Dadeldhura has admitted that the collection of resin is ‘out of control’. It is not illegal however, DFO Indra Mani Bhandari said.

“We cannot term the collection itself as illegal. However, the collectors must follow proper directives,” he said. “If collected in the right way, there is no problem,” he said.

According to him, collection of resin from the trees is an old affair. It has been done since 1978. The old style of resin collection was later considered harmful forcing the forest department to review the method.  “As the way of resin collection was harming trees, it was banned for 15 years. But now, the ban has been lifted. Now, resin can be collected but in a scientific way,” he explained.

Locals however expressed ignorance on the ban. They hardly know that there was ever any ban on such activities. They have ‘seen it going on unabated’.

“How the cup is fixed at the tree, how the tree is cut are the things to be taken care of. It is not that anyone can just walk in and take away the resin. There is a process to be followed. They need to get permission first,” said Bhandari.

“But it is true that some ill elements have been active. They have put the jungle at risk,” he added.

Bhandari claimed that the Department of Forest has been spreading awareness about forest conservation and the way to collect resin. People are informed about the proper way of resin collection, he said.

According to assistant forest officer Keshab Pudasaini, resin is now being collected only from 10 plots. The Supreme Court had given permission for this.  “A company called Dibyarojin has been collecting resin from 35 community and two national forests. And this was done as per the permission given by the court,” he said. He added that there could be other reasons behind resin collection for the drying up of the trees. “The lack of forest maintenance has also caused it,” he added.

KATHMANDU, April 3: The locals have demanded action against a construction company for negligence in constructing embankment on a section... Read More...

Forest management should be handed over to local bodies: Stakeholders

KATHMANDU, July 23: In a program organized by the Federation of Community Forest Users, Nepal in the capital on Saturday, stakeholders... Read More...