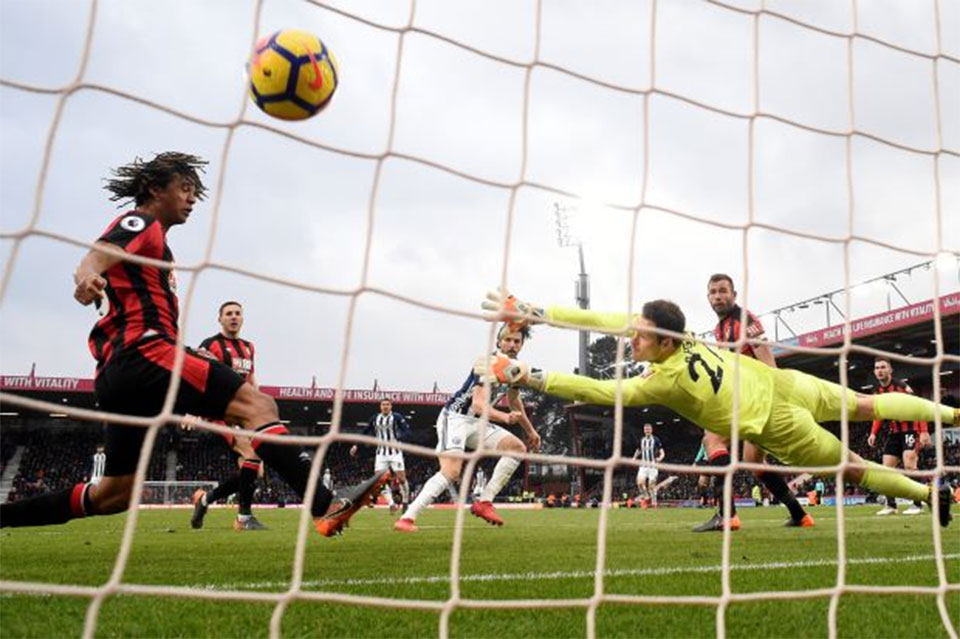 LONDON, March 18: Four-goal Mohamed Salah set a Liverpool record as they moved to third in the Premier League by thrashing Watford on Saturday, while at the other end of the table Crystal Palace’s win edged them out of the relegation zone.

The spotlight was on the basement battle in a slimline Premier League programme, owing to the FA Cup quarter-finals, but the superb Salah took centre stage with a magnificent display in Liverpool’s 5-0 romp in the later kickoff.

He had begun the day level on 24 goals with Tottenham Hotspur’s Harry Kane in the race for the Premier League Golden Boot but ended it four clear.

And his 36 goals in all competitions is a new record for a Liverpool player in a debut season — eclipsing the 33 scored by Fernando Torres in 2007-08.

“I have to thank everyone but mainly my team mates — without them I couldn’t reach this number,” Salah, who managed only two goals in a disappointing spell with Chelsea, said.

The Egyptian needed only four minutes to give Liverpool the lead, proving too fleet-footed for Watford’s defence, to fire past Watford keeper Orestis Karnezis.

He tapped in Andy Robertson’s cross shortly before halftime and soon after the interval he picked out Roberto Firmino who finished with a cheeky back-flick.

Salah completed his first Liverpool hat-trick in the 77th minute, wriggling this way and that before prodding a shot past Karnezis, and he was not finished as he slammed home from close range in the 85th minute to become the first Liverpool player since Luis Suarez in 2013 to score four goals in a league game.

A seven-match run without a win had dropped Palace back into the bottom three but they climbed out of it with an impressive 2-0 victory at Huddersfield Town, who are still in trouble.

James Tomkins put Palace ahead in the 23rd minute and skipper Luka Milivojevic’s 68th-minute penalty secured the win on a snowy day across the country.

Palace rose to 16th with 30 points from 31 games, ahead of Southampton (28) and West Ham United (30), neither of whom played and both of whom now have a game in hand.

“To get a victory today in those conditions was very, very good. The lads put in a great shift today,” Tomkins said. “It will go to the wire but that was a massive win for us.”

Bottom club West Bromwich appear doomed after they lost 2-1 at home to Bournemouth, having led through Jay Rodriguez’s 49th-minute opener. Jordon Ibe and Junior Stanislas earned Bournemouth the points as they took a huge stride towards securing a fourth successive top-flight season.

They edged up to 11th in the table, eight points above Southampton, who now occupy the last relegation spot.

West Brom are 10 points from the safety zone, having lost seven matches in a row.

“Without it being our last chance, it’s nearing the last-chance saloon,” manager Alan Pardew said.

Second-bottom Stoke City’s relegation fears grew as they went down 2-1 at home to Everton after having Charlie Adam sent off in the first half for a foul on Wayne Rooney.

Two goals by Cenk Tosun gave ninth-placed Everton rare away cheer, ending a run of five successive defeats on the road and moving them to the safety of 40 points.

Stoke, who have 27 points, had equalised through Eric Maxim Choupo-Moting’s close-range finish but ultimately paid the price for their numerical disadvantage.

“Charlie apologised,” said Stoke’s England keeper Jack Butland. “It will hurt him and it hurts us but we need to stop making it so difficult for ourselves.”

LIVERPOOL, June 23: Merseyside club Liverpool completed the signing of Egyptian winger Mohamed Salah from AS Roma on Thursday for a... Read More...

I will get trust vote with the support of CPN (Unified Socialist): Bagmati CM Shakya
22 hours ago