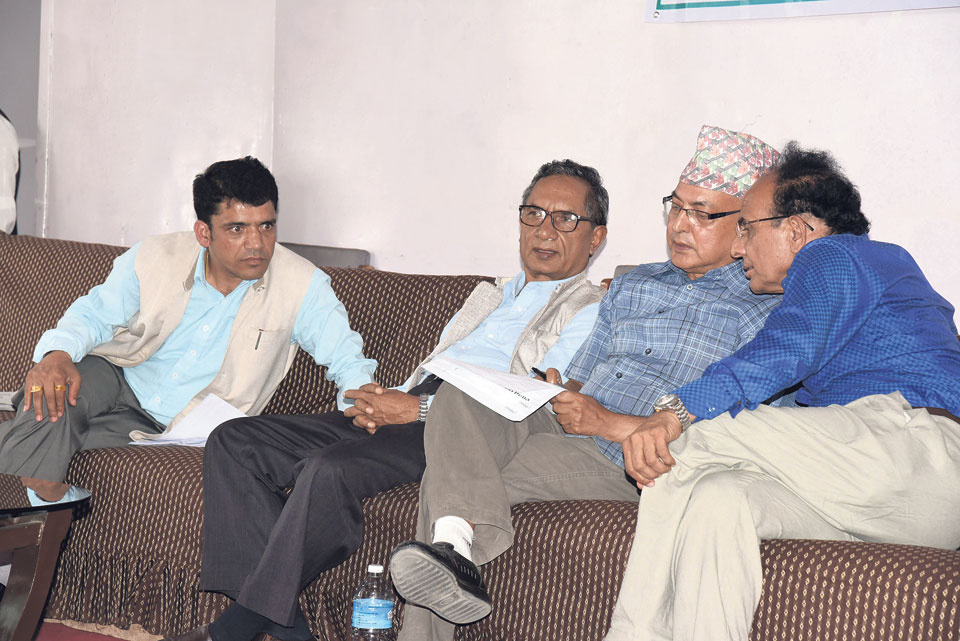 KATHMANDU, July 30: At a press conference organized Sunday at the Nepal Academy by Dolindra Prasad Sharma, the chairman and general manager (GM) of Sajha Prakashan, several staffers and shareholders of the Prakashan attacked him with a flurry of questions whose answers Sharma was unable to supply. Sharma has been accused of multiple charges of corruption.

No sooner had Sharma finished reading out a four-page statement in his defense than Sajha staffers and shareholders started throwing a volley of questions about the massive irregularities at the Prakashan.

Sajha board members and former education ministers Dinanath Sharma and Pradeep Nepal and board member Krishna Hari Baral, who were present on the podium to defend Sharma were also unable to provide satisfactory answers.

Sajha Prakashan has officially supplied only 2,900 copies of Sabaiko Nepali in the Kathmandu Valley, while Anu Books of Lagankhel has already sold 15,000 copies of Sabaiko Nepali by using Sajha logo in the market. “Where were they printed? Lets’ go right now in the market for inspection,” Sajha officials present at the function proposed. But Sharma said it was not the time to go for market inspection.

“We have given the private sector 50,000 copies of Sabaiko Nepali. They might have distributed them in the market,” Sharma claimed.

Around 200 participants, including journalists, had gathered at the press conference. Among the seven board members, Bijaya Subba, Harihar Khanal and Jeevan Chandra Koirala were not present at the function.

General Manager Sharma has been accused of appointing those close to political leaders and media persons, maintaining no record of annual incomes and book publications, transferring Rs 5 million from Sajha’s bank account to the GM’s bank account, serving both as GM and chairman against the rules and not getting the publishing house’s books audited for a decade.

Sharma has been reportedly gobbling up millions every year, printing books outside the publishing house but under the Sajha logo.

The number of students in Grade XI was 366,943 in 2014; 370,661 in 2015; 374,398 in 2016 and 448,926 in 2017, according to the National Examination Board (NEB).
The then education minister Chitra Lekha Yadav had appointed Sharma as the GM of Sajha Prakashan in January 2015. He was given the responsibility of chairperson as well a month later. Sharma’s term ended in January 2017. But the same month, he was reappointed the chairman and GM for four years. Dhani Ram Paudel of the CPN (Maoist Center) was the education minister at the time. Tribhuvan Chandra Wagle, a journalist from Gorkhapatra Publications, said that the appointment of persons close to the political leaders at Sajha Prakashan spoke volumes about the irregularities there.