Sajha Prakashan in a coma, 'officials eyeing only money' 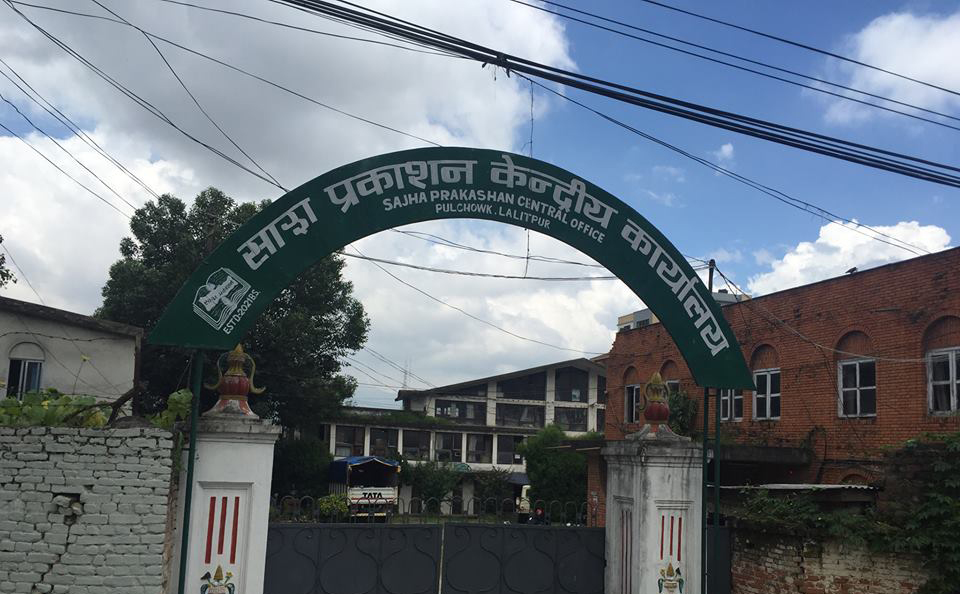 KATHMANDU, Feb 6: Sajha Prakashan Limited has been in a 'coma' for the past several months. The office of the state-owned publishing house opens every day but closes without doing anything. According to the officials at the 105-year old public publishing house, not a single meeting of the Sajha Prakashan management board has taken place over the last nine months.

Dolindra Prasad Sharma, the controversial general manager (GM) of Sajha Prakashan, has attended his office only for four days since last September, according to sources.

Sajha has been facing the uncertainty of official leadership for more than six months because of the indifference shown by Minister for Land Management, Cooperatives and Poverty Alleviation, Padma Kumari Aryal, who called controversial former Sajha board members Dina Nath Sharma and Pradip Nepal on Tuesday.

“I was also called by the ministry in the meeting today,” said Bijaya Subba, a lawmaker and an elected member of Sajha Management Board. “I refused to participate in a meeting attended by them [Sharma and Nepal], saying that Sharma and Nepal have played bad roles to damage Sajha Prakashan in the past,” said Subba. “I visited Minister Aryal separately after they left,” he added. “Minister Aryal sought my opinions on improving the publishing house.”

However, Sajha Prakashan officials blame Minister Aryal for protecting controversial GM Sharma and not doing anything to improve things at Sajha Prakashan. They criticize the government for deciding on November 20, 2018, to provide Rs 170 million to Sajha Prakashan without solving its management problems. Sajha has already been provided Rs 86.4 million (50 percent of Rs 170 million) to pay the retired officials.

By paying the 50 percent of the dues to be paid to 128 retired officials, Rs 4.8 million is in Sajha's bank account. However, GM Sharma is trying to spend it for other purposes, according to Sajha officials.

In the last week of July, 2018, Minister Aryal picked up joint-secretary Raghu Ram Bista as officiating chairman of the Sajha Prakashan along with other three members of the Sajha board.

“A meeting of the Sajha board cannot take place as there is duplication of board committees,” said lawmaker Subba. “The ministry should first seek a solution to manage board of Sajha Prakashan with a single management board by clearing old duel committees,” he added.

KATHMANDU, March 20:  A meeting of the management board of Sajha Prakashan held on Tuesday approved the resignation of Dolindra... Read More...

KATHMANDU, March 14: A meeting of the Sajha Management Board held on Tuesday decided to seek clarification from Dolindra Prasad... Read More...

We urge India to accept the truth: FM Gyawali
21 hours ago

With 72 new cases, Nepal’s COVID-19 tally spikes to 675
6 hours ago
Nepali Congress stands for suspension of funds to parliamentarians
8 hours ago
Patient dies at COVID-19 ward of Bharatpur Hospital, swab samples collected for test
8 hours ago