Sailors become the biggest cluster of infections in Sri Lanka 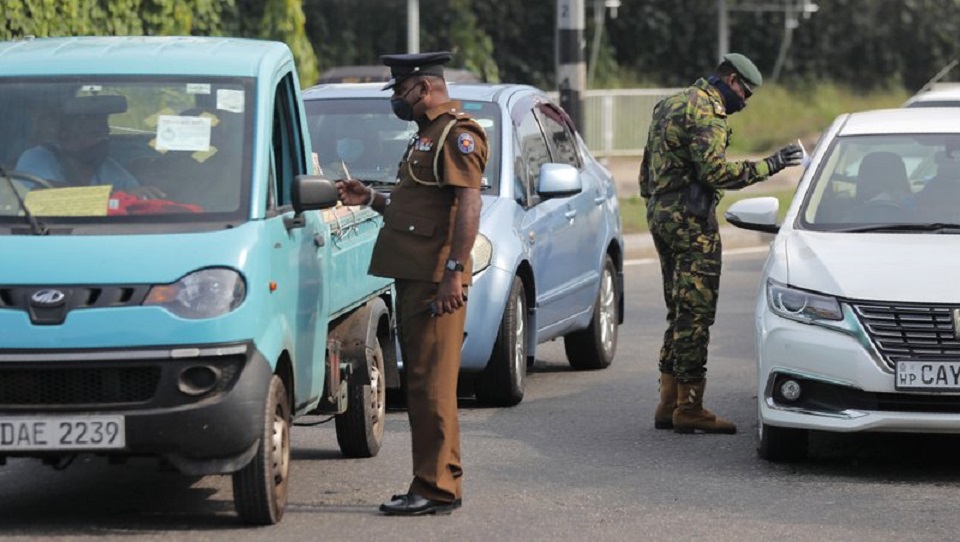 FILE- In this April 1, 2020 file photo, Sri Lankan police officers check identity of commuters during a curfew imposed to curb the spreading of new coronavirus in Colombo, Sri Lanka. The government has announced that it will re-impose a 24-hour countrywide curfew from 8.00 pm Thursday until next Monday, as a part of the efforts to control the spreading of the virus. (AP Photo/Eranga Jayawardena, File)

COLOMBO, Sri Lanka, April 30: Sailors at a Sri Lankan naval base have become the biggest cluster of coronavirus infections in the Indian Ocean island nation with 248 testing positive for the disease, authorities said Thursday.

Sri Lanka’s army chief Lt. Gen. Shavendra Silva said that out of 30 cases discovered in the last 24 hours, 22 are navy sailors and another seven had close contact with them.

The virus is believed to have entered the camp on the outskirts of the capital, Colombo, last week when sailors were deployed to hunt down a group of drug addicts who had contact with a COVID-19 patient and were evading quarantine. The virus then spread to different parts of the country when sailors went on home leave.

About 4,000 navy troops are being quarantined inside the camp while 242 relatives have been taken to four quarantine centers run by the navy.

Sri Lanka has had 649 COVID-19 patients and seven deaths. About half of the sick were diagnosed after April 22 and include 257 sailors or close contacts.

According to the newspaper Lankadeepa, with the largest circulation in the country, at least six villages have been sealed off this week in different parts of Sri Lanka because of exposure to the sailors who returned home. About 1,300 other people have been asked to self-quarantine, the paper reported.

In a bid to control the spread of the virus, the government has canceled home leaves for troops and ordered them to return to camps.

On Wednesday night, Sri Lanka reimposed a 24-hour countrywide curfew, which had been in force since March 20 but was relaxed during daytime in more than two-thirds of the country.

Four districts including Colombo are considered high-risk areas and have not been included in areas where restrictions had been eased.

Police said they have arrested more than 41,000 curfew violators since last month.

How we move forward will determine our future

The coronavirus COVID -19 pandemic is the defining global health crisis of our time. Cases are rising daily in Africa,... Read More...