Sahara advances into semifinal in Hetauda 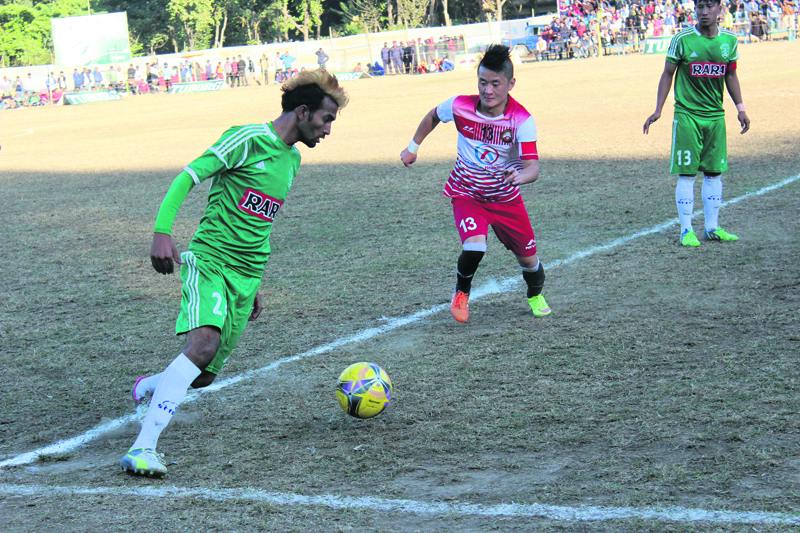 Players of Sahara Club(green) and Delhi United in action during their match of the Tuborg International Invitational Hetauda Gold Cup Football Tournmant 2073 in Hetauda on Tuesday.

In the match held at forestry ground, Sahara registered a hard four 3-2 tiebreaker win over Delhi United of India after 1-1 tie in the regulation time to book place in the last four. Sahara will take on defending champion Manang Marshyangdi Club for a place in the final.

The fate of the winner was directly decided through tiebreaker after the regulation time owning to bad light. Sahara goalie Sujit Mahat starred in the penalty shootout denying three shots from the spot. He was later declared the man-of-the-match.

Shiva Subedi, Bishnu Gurung and Pradip Gurung converted from the spot for Sahara while Sushan Gurung was denied by Indian goalie Sanju. Don Lopcha and Maruf were the only successful players to convert for the Indian side in tiebreaker. Meanwhile, Gyale, Roshan Chhetri and Logo failed to achieve target for the visiting team in the tiebreaker.

Earlier, Delhi players kept the match under control despite playing with a man down before the break. Hrishi of Delhi was shown red by referee Sudish Pandey in the 39th but the physically strong players of the visiting side dominated the show despite playing with numerical disadvantage.

It was Delhi who took the lead six minutes after breaker as Jonathan headed to give breakthrough in a cross of Don Lopcha. Soon after opening the score, Delhi resorted to offensive style of play which turned to be a setback. African recruit Richard of Sahara stored the parity in the 73rd when he headed home Roshan Malla's freekick.

Sankata will take on Tribhvan Army Club in the next match of the tournament to be played on Wednesday at the same venue. The tournament being organized by Suman Bhomjan Memorial Sports Foundation will see the winner taking home cash prize of Rs 500,000 and the runner up will walk home with a purse of Rs 300,000.

Rupandehi advances into semifinal in Jhapa