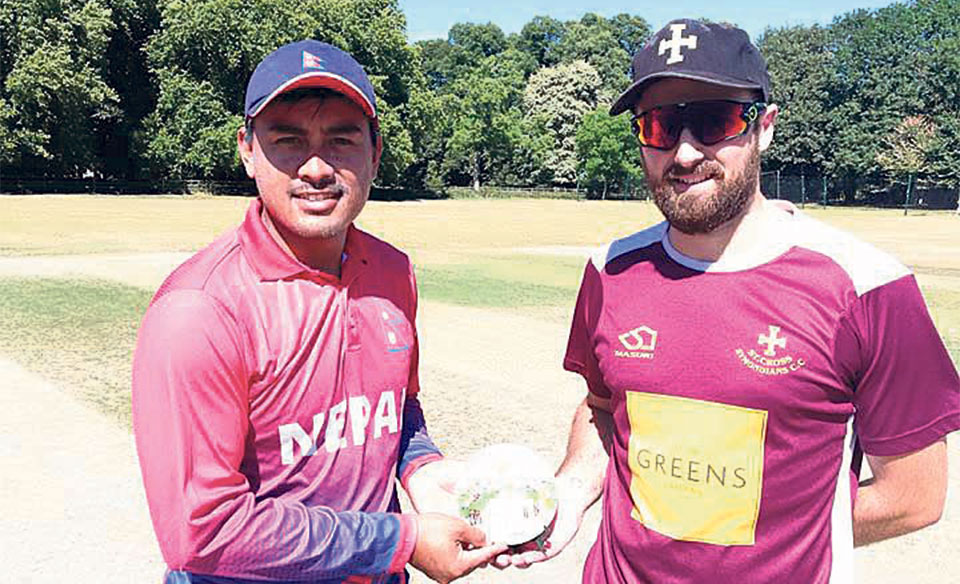 Nepal was limited to 149 runs in 20 overs chasing the total of 169 in the match that was played in a T20 format. Nepal’s regular skipper Paras Khadka was rested as Gyanendra Malla carried the captaincy duties.

Organ conceded 15 runs from his full quota of four overs dismissing stand-in captain Malla (18), Sharad Vesawkar (0) and Dipendra Singh Airee (3) breaking the back of the chase as Nepal lost eight wickets adding 149 runs in 20 overs. He was helped by Harry Trussler’s two wickets.

Sah smashed six fours and a six during his 48-ball stay at the crease but could not find support from the other end as Nepal lost the match.

Aarif Sheikh was the second highest scorer for the visiting team adding 34 runs to the total. He faced 24 deliveries with two fours and a six in his innings.

Sompal Kami was run out in the last over of the chase, keeping Nepal in the hunt with 16-run cameo which included a four and a six from nine deliveries.

Earlier, 227 first-class match veteran for Hampshire County Cricket Club, Jimmy Adams played a knock of 72 runs batting at number three for St Cross. Adams smashed nine fours and two sixes in his 48-ball innings. He was supported by Organ’s 39 runs which included two fours and two sixes. Tom Scriven made 23 runs including a four and a six in 16 deliveries to push the total to 168 runs in 20 overs for the loss of six wickets.

Nepal will play its third practice match against East London XI on Wednesday. The match will be played in 50-over format. The national cricket team had defeated Hampshire Hogs Cricket Club in the first practice match on Saturday.

KATHMANDU, March 18: Nepal succumbed to 45 runs defeat in the seventh-place playoff match against the Netherlands in the ongoing ICC... Read More...

GREATER NOIDA, July 13: Dipendra Singh Airee notched up a well-timed fifty but in a losing cause as Noida XI registered... Read More...

Rainfall likely to continue for three more days
23 minutes ago