SAG torch to be toured in all seven provinces 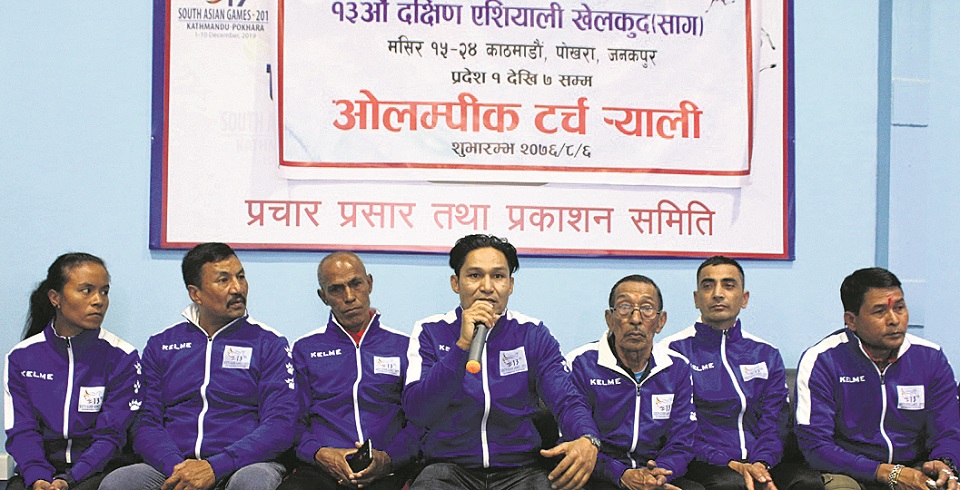 President of the Nepal Players and Coaches Association Deepak Shrestha speaks during a press conference in Kathmandu on Thursday. Photo Courtesy: NSC

KATHMANDU, Nov 22: Nepal Players and Coaches Association will be organizing an Olympic torch rally in all the seven provinces of Nepal for the 13th South Asian Games (SAG) to be held in Kathmandu, Pokhara and Janakpur in December.

Organizing a press meet in Kathmandu on Thursday, the association informed the torch rally plans for all the seven provinces.

President of the association and rally coordinator Deepak Shrestha informed that the rally will start in Swayambhu at 8 am on the morning after Member Secretary of the National Sports Council (NSC) and the 13th SAG Working Committee coordinator Ramesh Kumar Silwal handed over the torch to the first international medal winner of Nepal JitBahadur KC.

Shrestha further added that the torch will be taken to all the main cities of the seven provinces. In the press meet, SAG record holder and former runner BaikunthaManandhar said that the 13th SAG will be grander than the earlier editions of the tournament held in Nepal.

The rally will reach Province 1’s Biratnagar on the first day followed by Province 2’s Janakpur on the second. It will be taken to Province 3’s Hetauda and Chitwan on the third, Province 5’s Lumbini and Butwal on the fourth and Karnali Province’s Surkhet and Province 5’s Nepalgunj on the fifth day of the rally.

The plan includes torch’s tour in different parts of Kathmandu valley on the ninth day. On the same day, the Olympic flame will be lit at the Dasharath Stadium in Tripureshwar.

Why Tulasa ditched SAG for Qatar

SURKHET, Dec 5: Padma Khatri, 44, has not eaten properly since the last few days. Neither are her eyes dry.... Read More...