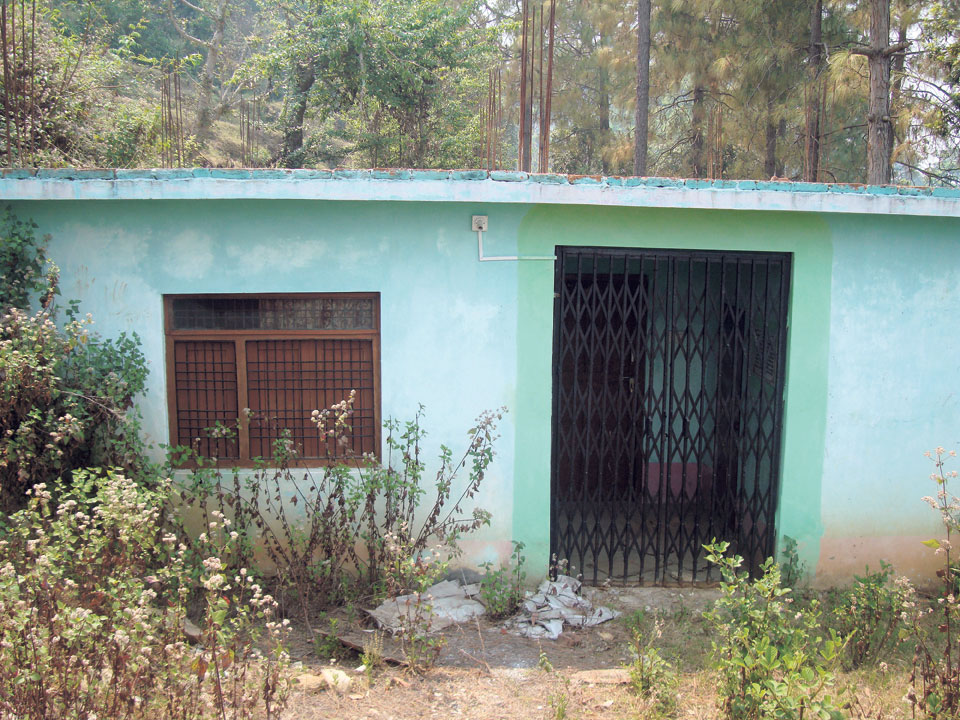 A safe house was built to shelter women who have been victim to domestic violence in Gadhi, Baitadi four years ago. Due to lack resources to operate it, it has not been brought into use.

BAITADI, July 23: This February a report by the district police stated that number of suicide cases due to domestic violence in the district were on rise. In every 12 days at least one person was reported to be ending life and most of the women victims did so because of domestic violence. In lack of safe shelter where they could get refugee after revealing of torture that they have been subject to by their family members, they were found to be reluctant to report to the police. Apart from that, women were also found to be unaware of legal protection that they are entitled too. These factors distanced them from seeking justice.

It's not that the there is no safe shelter for such women to stay in such cases. There is but the problem is that it has not been brought into use. Four years ago a safe house was built in the district for women at a cost of 2.4 million rupees. However, it is yet to come into operation.

“For some women, who report of being victim to domestic violence, it's not possible to return home. In such cases they should be provided shelter where they can stay till they find their way ahead,” says DSP Heramba Sharma. “In lack of it, women often hesitate to share their problem with authorities,” he added.

Considering the need, a safe house with four rooms and a kitchen was built in Gadhi, the district headquarters by Inter Party Women's Alliance, with the support of District Administrative Office, CARE Nepal and the Gadhi Municipality.

“It is very crucial for the shelter to come into operation if we want to encourage women to report domestic violence. But four years on, the house is now in ruins,” said Ganesh Shahi, an officer with the UNFPA.

Women activists in the district also say that the lack of proper shelter has prevented women reporting violence against them. But even the single building which was built for them has gone waste. They put the blame on the government for not doing enough to bring it into operation. Local women press for the need to open the shelter and operate it well.

According to Shahi, there have been cases where women have needed shelter house. But in lack of such shelter in the district, many of them were sent to other districts where they took shelter in safe houses operated by non-profits and the government. “It would be far easier if we had good shelter house here itself. When women are sent away, a lot of problems add up in their already troubled life,” he said.

Shahi who is based in Baitadi for several years now notes that gender based violence is very serious in the district. “In remote areas, it is even vicious,” he said.

According to Shahi, women in the remote villages are much more vulnerable to violence because of child marriage. Since they are married off at a very young age, they are not able to raise voice against violence, he said.

“They are young and are way more vulnerable to domestic violence. But in lack of awareness and back support, they are forced to keep things to themselves,” he said.

Shahi added that only a few women choose to report their problems to police as many, he said, “don't trust that the police can help them.”

“There is serious need of legal and residential support for them. A lot of times, women need such shelters. But when we have no arrangement to respond to their needs, they are left helpless,” he said.

Citing a recent case he said that authorities recently rescued a young nursing mother after she was severely beaten by her family members and sent her to a shelter home in another district. But, she got back in a few days stating that she was not allowed to stay there for longer. “Now she has been kept in a rented house in Patan,” he said. The rent of the house is borne by the Inter Party Women's Alliance.

According to Parbati Bhatta, the district president of the alliance, the government must bring the shelter house in operation without delay. “The problem with bringing the shelter into operation is lack of funds. Regular finances should be allocated for staffing the shelter and purchase required commodities to feed its inhabitants. Or else, it cannot be brought into operation,” she said. “We have also been putting pressure on the concerned authorities in this regard,” she added.

District treasurer of the alliance Kanta Chanda reported that government bodies have several times been requested for this. “But we have not been able to draw their attention,” she said.

Chanda and Bhatta lamented the sorry state of women's safe house. They said that it would be lot better to accommodate women seeking refugee in the safe houses instead of keeping them in rented space. “The safe house has some dresses, furniture and even food materials but in lack of personnel to operate it, they are decaying,” Chanda said.

Quake victims who built homes themselves deprived of grant

NUWAKOT, Jan 20:  Tired of waiting for the government to implement the reconstruction policy after the devastating earthquake of 2015,... Read More...