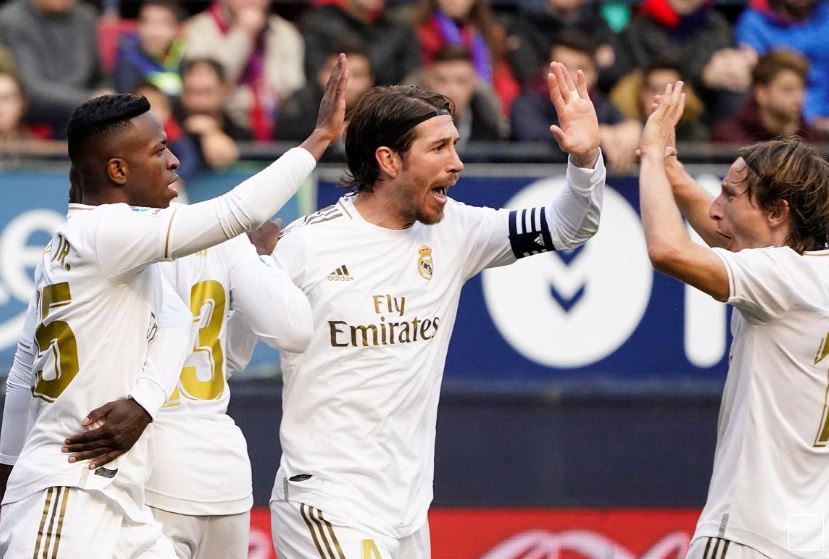 MADRID, Feb 10: La Liga leaders Real Madrid continued their rampant form by coming from behind to win 4-1 at Osasuna on Sunday for a fifth consecutive league victory as they produced a defiant response to their Copa del Rey defeat by Real Sociedad.

The win briefly increased Zinedine Zidane’s side’s advantage at the top of the standings to six points over nearest challengers Barcelona, but the Catalans restored the gap back to three points by winning 3-2 away to Real Betis.

Real started badly at Osasuna’s compact and notoriously atmospheric Sadar stadium, Unai Nunez giving the home side the lead in the 14th minute with a diving header from a corner.

The visitors showed little sign of panic, however, and midfielder Isco equalised in the 33rd minute with a volley after Gareth Bale had come close to scoring with a header and Karim Benzema had seen a shot cleared off the line.

Captain Sergio Ramos put Real in front five minutes later with a header from close range after a flick-on from Casemiro while substitutes Lucas Vazquez and Luka Jovic stretched the lead with late strikes.

“This was a typical game against Osasuna, we know how passionate their fans are and that they put you under real pressure. They went ahead early but we stayed calm and got the game back under control,” Casemiro told reporters.

“We had just been knocked out of the Cup and this was a tough game for us mentally but we showed that we want to fight to win every other competition we are left in and got three very important points.”

Real tasted their first defeat since October in Thursday’s 4-3 Cup loss at home to Real Sociedad but Zidane recalled many of his top performers to face Osasuna, who had only lost twice at home in the league in the last 22 months.

Full backs Ferland Mendy and Dani Carvajal restored solidity to their defence while Casemiro effectively anchored a midfield that was too lightweight against Sociedad.

Bale, making his first league appearance for a month, laid on the pass from which Isco pulled Madrid level and set them on the path to another victory which underlined their status as title favourites.