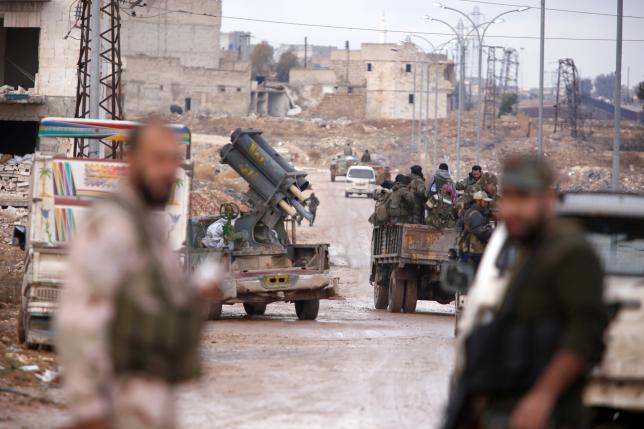 BEIRUT/ROME/MOSCOW, Dec 4: Russia said on Saturday it was ready for talks with the United States about a withdrawal of all Syrian rebels from eastern Aleppo, where advances by the Russian-backed Syrian army and its allies threaten to deal a crushing blow to the rebellion.

In just over a week, the army and allied militias have seized large areas of the opposition-held territory in eastern Aleppo in a fierce campaign that may leave the rebels with no choice but to seek a negotiated passage out of their area.

With tens of thousands of civilians still living in the rebels' shrinking, besieged enclave, the U.N. envoy for Syria suggested eastern Aleppo could fall by the end of the year and hoped a way could be found to avoid a "terrible battle".

Responding to the Russian proposal, an official with an Aleppo rebel group said commanders in the city had vowed to fight on. They would support the opening of corridors for civilians to leave the city, but would not surrender it.

The government advances in Aleppo have brought President Bashar al-Assad to the brink of his biggest victory yet in a civil war that grew out of protests against his rule in 2011.

Backed by the Russian air force and Shi'ite militias from Iran, Iraq and Lebanon, the government has gradually closed in on eastern Aleppo this year, encircling the eastern parts of the city before launching a major assault in September.

The United Nations estimates that close to 30,000 people have been displaced by the latest fighting, 18,000 of them leaving to government-held areas and a further 8,500 going to the Kurdish-controlled neighbourhood of Sheikh Maqsoud.

Supplies of food and fuel are critically low in eastern Aleppo, where hospitals have been repeatedly bombed out of operation. Hundreds have been killed in the bombardments.

U.N. envoy Staffan de Mistura said more than 100,000 people may still be in the rebel-held area. The Syrian Observatory for Human Rights, a Britain-based group that reports on the war, said it could be as many as 200,000 people.

Russia, which has assumed a pivotal role in Syria since it deployed its air force there 15 months ago, said the withdrawal of all rebels would "normalise life" in eastern Aleppo.

"We are immediately ready to send out military experts, diplomats to Geneva in order to agree mutual actions with our American colleagues to ensure the pullout of all the rebels without exclusion from eastern Aleppo," Russian Foreign Minister Sergei Lavrov said.

There was no immediate comment from the United States, which has backed some of the rebel groups fighting Assad, including Free Syrian Army factions fighting in the Aleppo area.

Long outgunned by the Syrian military, Russia's air force and militias that include Lebanon's battle-hardened Hezbollah, the rebels say they have been abandoned to their fate by foreign governments including the United States.

With no good options, the rebels have been holding talks with Russian officials which they say had produced agreements including the departure of all jihadist fighters from Aleppo. The aim was a ceasefire where FSA rebels would stay in the city.

But Zakaria Malahifji, the head of the political office of the Aleppo-based Fastaqim faction, said Lavrov's comments had "cancelled everything" and the meetings in Turkey had "almost come to a halt".

Russia has acknowledged contacts with the rebels but given no details of the talks in Turkey. The Syrian army has vowed to take back the whole city from rebels.

Speaking to journalists in Aleppo, General Samir Suleiman, head of the media arm of the army's political directorate, said Russian efforts were being conducted in coordination with the Syrian leadership.

"We open the way to any political solution that halts the bloodshed, the killing, the destruction", he said, adding the army had taken back around half of the area the rebels had held.

The army command issued a statement calling on residents to return to their homes in areas of northeastern Aleppo that were captured from the rebels, saying they were being rehabilitated.

The rebels said the assault on Tariq al-Bab had been repelled. Fierce clashes were underway in the Aziza as rebels sought to repel another attempted advance, a rebel official said.

At least seven plumes of smoke were seen rising from rebel-held areas of the city on Saturday morning and the sound of jets could be heard overhead, a Reuters witness in government-held western Aleppo said.

The Observatory said at least three people were killed in an air strike on the al-Shaer neighbourhood of eastern Aleppo.

The civil defence rescue service in eastern Aleppo said a gathering of displaced people had been struck and put the death toll at more than six. The army denies targeting civilians.

The Observatory also reported that rebels shot down a Syrian war plane over Aleppo, killing the two pilots on board. Reuters could not obtain Syrian military confirmation of the report.

Speaking at a conference in Rome, U.N. envoy de Mistura indicated eastern Aleppo could fall by the end of the year, saying "Aleppo is not going to stay that long".

"I was feeling it would be a terrible battle ending up by Christmas/New Year. I hope the battle will not take place, that there will be some type of formula," he said.

In apparent reference to the talks between Russian and rebel officials, de Mistura said "informal negotiations" had reduced the level of fighting in eastern Aleppo - a comment rebel officials dismissed as out of touch with reality.

The government has reached numerous local agreements with rebels in besieged areas by which they have been given safe passage to the insurgent-held province of Idlib in northwestern Syria. Some analysts believe the Aleppo rebels may eventually be forced to accept such an agreement.

European Union foreign policy chief Federica Mogherini, speaking in Rome, said she was certain Aleppo's fall would not end the war, and there would be other military escalations.

"This will only make things worse and, by the way, I am convinced the fall of Aleppo will not end the war. We will have other military escalations," she said.

RJP Nepal seeks withdrawal of 'false' cases against it cadres

In pics: People celebrate Gaijatra in Sankhu
44 minutes ago