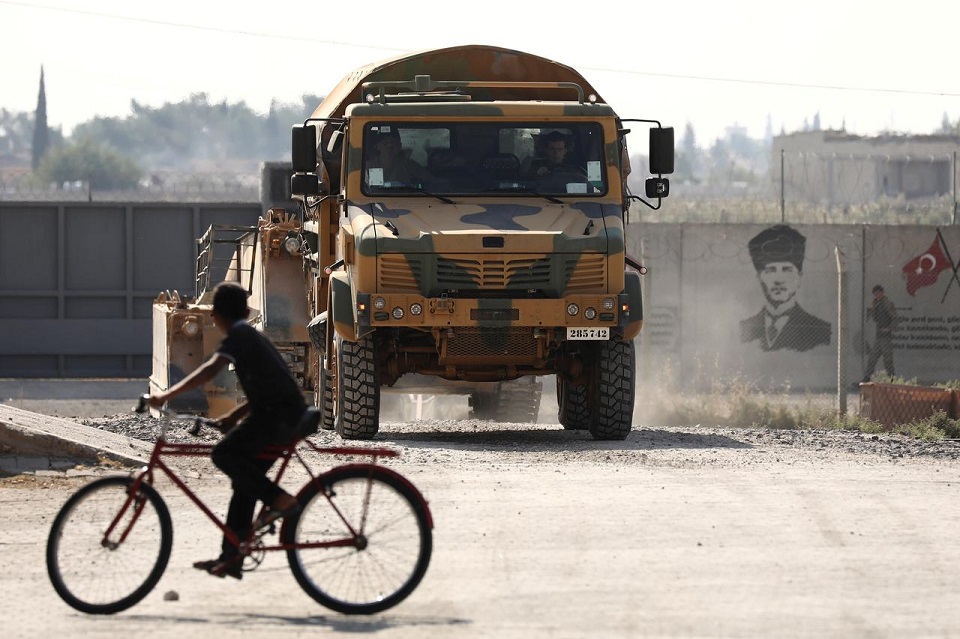 Turkish soldiers in a military vehicle return from the Syrian town of Tal Abyad, as they are pictured on the Turkish-Syrian border in Akcakale, Turkey, October 24, 2019. REUTERS/Huseyin Aldemir

MOSCOW/ISTANBUL, Oct 24: Kurdish forces have begun withdrawing from areas near the Turkish frontier in Syria, Russia’s deputy foreign minister was quoted as saying on Thursday, following a deal between Moscow and Ankara that ended Turkey’s cross-border military offensive.

Under Tuesday’s accord, sealed by presidents Vladimir Putin and Tayyip Erdogan in the Russian city of Sochi, Russian military police and Syrian border guards are required to remove all Kurdish YPG militia 30 km (19 miles) from the Turkish border over a roughly six-day period.

Ankara views the YPG as terrorists with ties to Kurdish insurgents operating in southeast Turkey.

“We note with satisfaction that the agreements reached in Sochi are being implemented,” Interfax news agency quoted Russian Deputy Foreign Minister Sergei Vershinin as saying.

“Everything is being implemented,” he said.

Russia will send a further 276 military policemen and 33 units of military hardware to Syria in a week to help implement the deal, RIA news agency cited a defence ministry source as saying. The first Russian military police arrived in the northern Syrian town of Kobani on Wednesday.

Next Tuesday, Russian and Turkish forces will start to patrol a 10 km strip of land in northeast Syria where U.S. troops had for years been deployed along with their former Kurdish allies.

Asked whether there would be joint patrols with the Russians or separate coordinated patrols, Turkish security sources said on Thursday Ankara was still working on the issue and that the 150-hour period set for the YPG to withdraw had only just begun.

The abandonment of Kurdish forces in northern Syria has reinforced already existing doubts in the region and around the world... Read More...