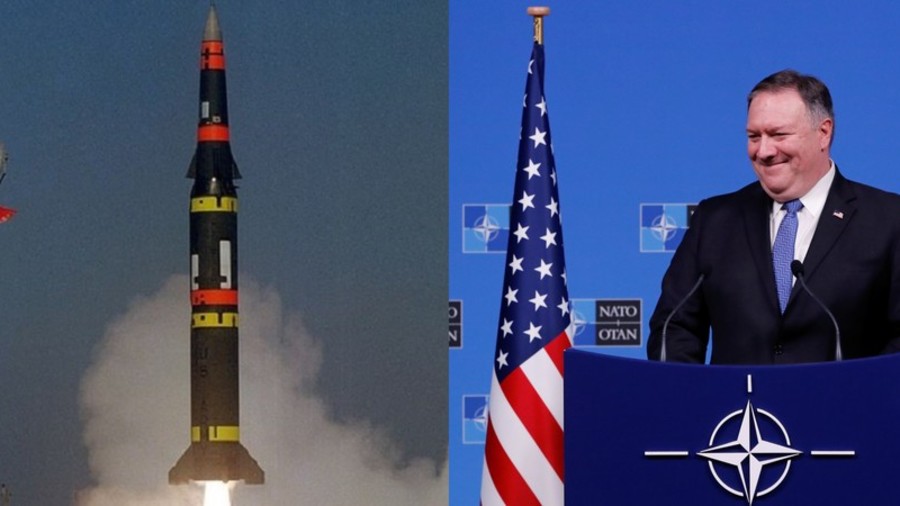 WASHINGTON DC, Dec 5: US Secretary of State Mike Pompeo has said that Washington will suspend its obligations under the 1987 INF nuclear treaty within 60 days if Russia does not “return to compliance.”

Speaking to NATO foreign ministers on Tuesday, Pompeo said the US was willing to start the process of leaving the treaty, citing alleged Russian violations.

“In light of these facts, today, America will announce it finds Russia in violation of the treaty and we will remove ourselves from the treaty in 60 days unless Russia returns to compliance,” he said.

Pompeo alleged that the Russian violations fit a “larger pattern of lawlessness” and that Moscow must return to “full and verifiable compliance.” The Secretary of State claimed that the US was “upholding the rule of law” and was bound by its international commitments.

“When we set forth our commitments, we agree to be bound by them. We expect the same of our treaty counterparts everywhere — and we will hold them accountable when their words prove untrustworthy,” he said.

On Monday, three Democrat senators – Bob Menendez, Jack Reed, and Mark Warner – criticized Trump’s intent to walk away from the treaty, calling it a “political and geostrategic gift to Russia,” arguing it lacked “strategic forethought” and could even affect other arms control treaties, including the Strategic Arms Reduction Treaty (START).

The US has repeatedly claimed that Russia has violated the 30-year-old arms reduction treaty, saying that it has built missiles prohibited under its terms. Moscow has returned accusations of non-compliance on the US, arguing that US bases in Eastern Europe are not defensive but offensive and could potentially be used to target Russia.

NATO Secretary Jens Stoltenberg echoed Pompeo saying that NATO members had concluded that Russia was in violation of the treaty and "poses a threat" to its allies. Stoltenberg said that NATO's "unity" on the issue demonstrated the "strength" of the military alliance and "sends a very clear message about who is responsible for the violations."

The INF treaty, signed in 1987 between the US and the USSR, eliminated nuclear and conventional ground-launched ballistic and cruise missiles with ranges of 500 to 5,500 kilometers. It did not affect air- and sea-based missiles, which the US possessed at the time but the USSR did not.

BRUSSELS, June 25: NATO urged Russia on Tuesday to destroy a new missile before an August deadline and save a treaty... Read More...

Three arrested with a pistol from Gongabu
13 hours ago