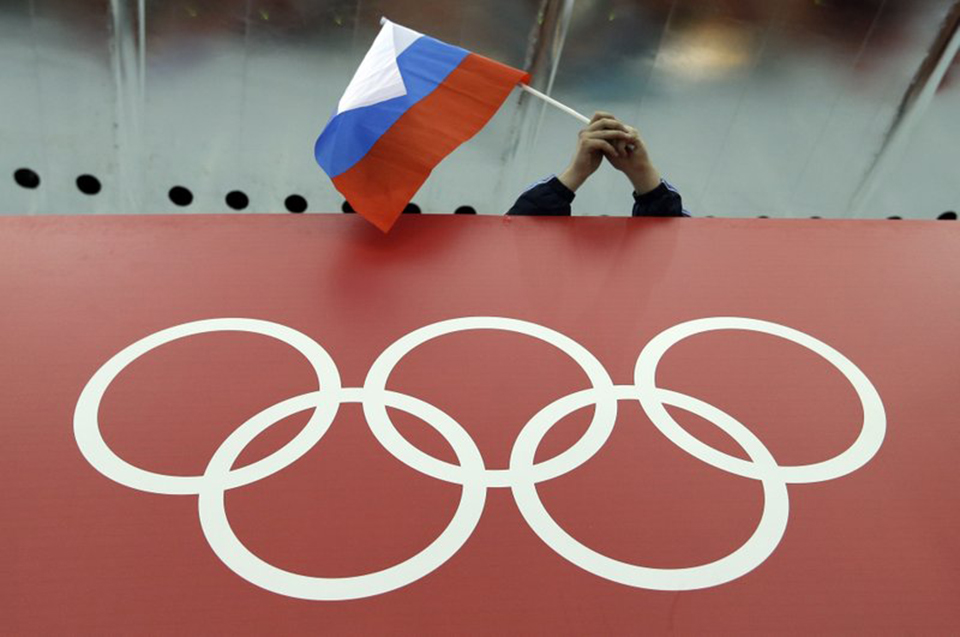 FILE - In this Feb. 18, 2014 file photo, a Russian skating fan holds the country's national flag over the Olympic rings before the men's 10,000-meter speedskating race at Adler Arena Skating Center during the Winter Olympics in Sochi, Russia. A person familiar with the case tells The Associated Press that Russia's anti-doping agency could face suspension again based on information indicating data from the Moscow drug-testing lab had been manipulated before being delivered to the World Anti-Doping Agency earlier this year. (AP Photo/David J. Phillip, File)

DOHA, Qatar, Sept 24: Russia’s doping troubles are nowhere near over. After a head-snapping day of developments from Moscow to Tokyo to the Middle East, the country has new fears that its status at next year’s Olympics could be in jeopardy — and no doubt about where it stands in track and field.

“It just reinforces everything,” Rune Andersen, the head of track’s task force on Russian doping, said Monday in Qatar after recommending that the country’s federation remain barred during this week’s world championships.

Earlier Monday, the World Anti-Doping Agency had announced during its meeting in Tokyo that it was giving Russia three weeks to explain what looked like manipulation of critical data from its Moscow lab, which was not matching up with data WADA received from a whistleblower who helped break open the Russian doping scandal in 2016.

The lab data was key to prosecuting cases stemming from Russia’s intricate plot to give its athletes performance enhancers in preparation for the 2014 Sochi Olympics and other big events, while preventing them from getting caught.

Andersen’s report for track’s governing body, the IAAF, offered a detailed accounting of the data case that WADA had made public earlier. It said the discrepancies “are not random. In many cases, they relate to positive findings that appear” in the database provided by the whistleblower.

Meanwhile, in Moscow, Russian officials took a dreary view of the developments, which could lead to the country’s anti-doping agency being suspended again, some 12 months after reinstatement upon delivering the lab data to WADA.

He added that if Russia can’t either rebut the claim or identify potential suspects in the data manipulation, “then the Russian Olympic team’s prospects of taking part in the Games in Tokyo next year could be under threat.”

With the Russian Olympic Committee suspended last year, Russians competed as “Olympic Athletes from Russia” at the Pyeongchang Games — not allowed to wear their country’s colors or bring their country’s flag.

The IOC reinstated the Russian Olympic Committee after those Winter Games, and all appeared to be getting back to normal for Tokyo.

When asked about the data investigation, the IOC said it “fully respects this process” and WADA’s jurisdiction.

The possibility of data manipulation has potential to threaten dozens of cases that individual sports federations have been pursuing against Russian athletes. The data already has been used to support suspensions against 12 Russian weightlifters, including 10 former world or European championship medalists, and cases in the winter sport of biathlon.

Though once considered among the most corrupt of sports organizations, the IAAF has taken as tough a stance as any when it comes to Russian doping. The country’s track federation has been suspended since 2015. When worlds open Friday, it will mark the second straight time Russia will bring a truncated team to the championships, and the athletes who do come — 30 of them, at this point — will have to compete without their country’s flag or uniform.

Any slim chance of that changing was obliterated by the latest news.

Andersen’s report also included details about banned coaches still allegedly involved in the sport, and the case of high jumper Danil Lysenko, who was supposed to represent Russia’s new, drug-free generation but is under investigation for having documents forged to avoid being suspended for a whereabouts violation.

“It really does not remotely surprise me that the council unanimously endorsed the strongest recommendation that we have ... had from the task force that the Russian federation remain suspended,” IAAF president Sebastian Coe said.

Beyond giving Russia three weeks to come up with answers, WADA would not put a timeline on the data investigation. Its director general, Olivier Niggli, stood by last year’s decision to reinstate RUSADA under less-stringent terms than were initially proposed.

“I believe it was actually a very important decision and absolutely the right decision,” Niggli said. “I’m convinced that we would not have the data if we had not taken that decision, so we would not even be talking about it today. There would still be a cloud of suspicion and nothing would have gone forward.”

Niggli conceded the tampering could force WADA to drop some of the cases against Russian athletes, “but there will be a good number of cases which can still move forward.”

Andersen said he expects to hear more from WADA in November, possibly at its next meeting in Poland.

The clock is ticking.

Next year’s Olympics start July 24 — 10 months from Tuesday — and it now seems certain that Russia’s status as a rule-following, drug-free sports country is in question again.

“Clearly it’s incredibly concerning and incredibly disappointing,” said Nicole Sapstead, the CEO of the UK Anti-Doping Agency, which led the overhaul of Russia’s anti-doping operation. “A number of obstacles were placed to avoid that data being obtained. And then when it’s finally obtained and you’re rooting through it and assessing it and assimilating it, you suddenly find that it all doesn’t quite tally.”

SOUTH KOREA, Feb 20: A Slovenian hockey player who became the third athlete to be caught doping at the Pyeongchang Olympics... Read More...