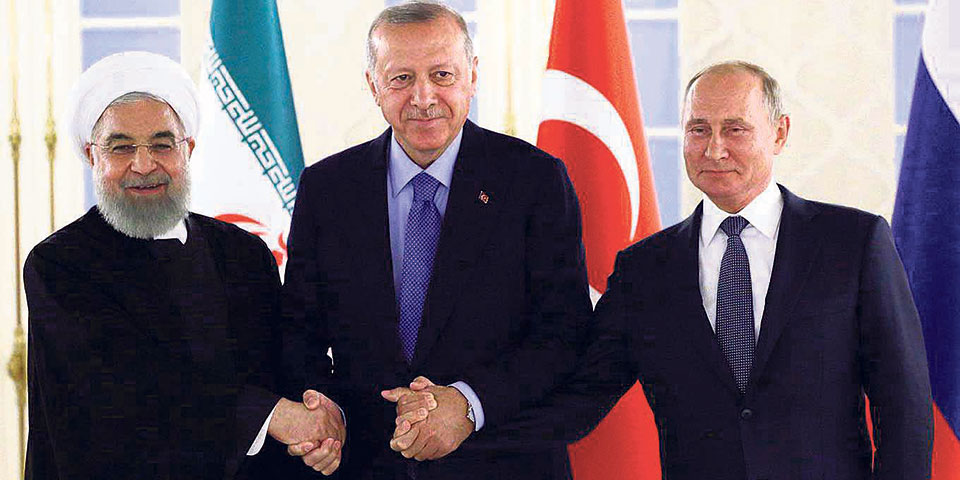 Russia lacks the tools required to act as an uncontested hegemon in the Middle East. When the United States decides to take up the mantle of democracy and peace again, Russia will be no match for it
TEL AVIV – The collapse of the Soviet Union three decades ago meant that its once-formidable presence in the Middle East collapsed as well. Today, however, as the United States has withdrawn from the region, Russia has rushed to recapture the Soviet Union’s position there, through a combination of military force, arms deals, strategic partnerships, and the deployment of soft power. But its success is being significantly overestimated.

To be sure, Russia’s soft-power push has been impressive. As early as 2012, President Vladimir Putin emphasized the need to expand Russia’s “educational and cultural presence in the world, especially in those countries where a substantial part of the population speaks or understands Russian.” At a recent conference in Moscow, Putin made clear that Israel, for one, is on that list.

As part of this effort, Russia established a federal diaspora agency known as Rossotrudnichestvo, which has opened centers for science and culture in Egypt, Jordan, Lebanon, Morocco, Syria, and Tunisia. Moreover, it has expanded the Arabic service of RT, the state-funded international television news network. With 6.3 million monthly viewers in six Arabic-speaking countries—Egypt, Iraq, Jordan, Morocco, Saudi Arabia, and the United Arab Emirates— RT Arabic is now among the Middle East’s leading networks.

In attempting to fill the vacuum created by the withdrawal of the US from the region, Russia has sought to distinguish itself from the Middle East’s longtime hegemon by establishing itself not as an imperial power, but as an arbiter of cultural progress. “Exporting education and culture will help promote Russian goods, services, and ideas,” Putin declared in 2012. “Guns and imposing political regimes will not.”

This messaging has had an impact. Last year, only 35 percent of young Arabs (aged 18-24) viewed the US as an ally, compared to 63 percent two years earlier. While Russia has not overtaken the US, 20 percent of respondents cited the country as their “best friend” outside the Middle East and North Africa.

But Russia is likely to disappoint its fans in the Middle East, not least as a regional peace broker. After America’s peace negotiations with the Afghan Taliban failed— and nearly 30 years after the end of the decade-long Soviet occupation of the country— the Kremlin stepped in to mediate discussions between the Taliban and representatives of other Afghan groups.

Yet the Middle East— a region of manifold conflicts stemming from religious, ethnic, political, historical, and strategic factors— has time and again exhausted foreign actors’ commitment. There is little reason to think that Russia, which has never been particularly inclined toward long-term peace-building, will be able to mediate, let alone underwrite, durable peace agreements.

Russia’s diplomatic weaknesses have been starkly apparent in Syria. Its use of hard power won the civil war for President Bashar al-Assad’s dictatorship, showing how the strategic deployment of unrestrained military force— witness the utter destruction of Aleppo— can be a game-changer.

But Russia has since become mired in local rivalries between Syria and Turkey, Saudi Arabia and Iran, Turkey and the Kurds, and Israel and Iran. While a policy of neutrality has enabled Russia to maintain a dialogue with the various sides, it will do nothing to create a new regional order.

As it stands, Syria is Russia’s only client state in the Middle East. And even there, it has failed to capitalize on its position, not least because of enduring Western sanctions. Moreover, Russia is at odds with Iran, its partner in Syria, over the two sides’ strategic objectives in the country. Russia wants a stable Syria, where it can consolidate its foothold, as part of a broader strategy aimed at reversing its Cold War defeat. Iran’s use of the country as an arena for its conflict with Israel undermines this goal.

Otherwise, Russia is confronting what are essentially swing states, willing to work with the power that gives them the best deal. Consider Egypt, which has become a major buyer of Russian arms and a strategic ally in Libya, where both countries back General Khalifa Haftar’s Libyan National Army, in defiance of the internationally recognized government in Tripoli. Yet, far from establishing Russia as a leading ally, Egyptian President Abdel Fattah el-Sisi is leveraging that relationship to strengthen his position vis-à-vis Egypt’s US patron.

Saudi Arabia must coordinate its oil activities with Russia to cope with the surge in US energy production, and was undoubtedly disturbed by US President Donald Trump’s betrayal of the Kurds in Syria, who, like the Saudis, had been loyal American allies. But the notion that Saudi Arabia would turn its back on the US is outlandish. Highlighting the value the Kingdom places on US engagement in the region, it agreed after America’s withdrawal from northern Syria to pay for the deployment of a US contingent to help keep Iran at bay.

Similarly, Israel has no choice but to coordinate with Russia in Syria, where it has been attacking Iranian military installations. But it has no incentive or ability to abandon its unique relationship with the US.

As for Turkey, its top defense industries official, Ismail Demir, recently declared that the country has “allied relations” with both Russia and the US. But the truth is that it will not sacrifice its NATO membership, no matter how many Russian S-400 missiles it purchases.

The US may be backing away from the Middle East militarily, but it hasn’t exactly left. It maintains a massive armed presence in the Gulf, and benefits from a long history of popular cultural imperialism, with which Russia’s incipient soft-power offensive simply cannot compete.

Russia may be able to play up its clout for an indefinite period. But with an economy the size of South Korea’s and military capabilities that are no match for America’s, it lacks the tools required to act as an uncontested hegemon. When the US decides to take up the mantle of democracy and peace again, Russia will be no match for it.

Shlomo Ben-Ami, a former Israeli foreign minister, is Vice President of the Toledo International Center for Peace. He is the author of “Scars of War, Wounds of Peace: The Israeli-Arab Tragedy”
© 2019, Project Syndicate
www.project-syndicate.org

U.S. and Russia blame each other for near collision in East China Sea

MOSCOW/TOKYO, June 7: Russia and the United States blamed each other for a near collision between their warships in the... Read More...