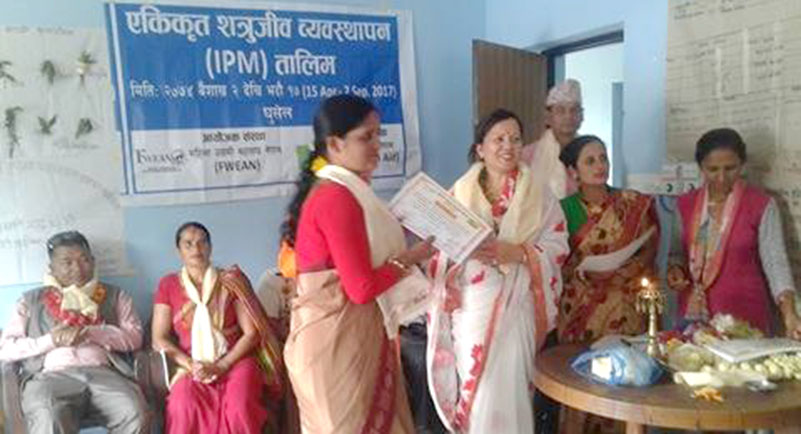 A woman (left) receiving a certificate after training provided by Federation of Women Entrepreneurs Association of Nepal. (Photo courtesy: FWEAN)

LALITPUR, Sept 3: Prior to receiving training on vegetable farming, 58-year-old Maili Thing of Bagmati Rural Municipality of Lalitpur District was often pestered by vegetable pests. She was discouraged to see vegetables being destroyed while they were about to bear fruits and flowers.

Now her problem has been resolved. Her vegetable farming is flourishing well – free from harmful insects. She now could use pesticide to solve the problem even if it occurred following an Integrated Pests Management Training provided by Federation of Women Entrepreneurs Association of Nepal (FWEAN), targeting women folks in the rural areas.

“We have sufficient plots of land for vegetable farming,” she shared, “But we were often harassed by the pests that destroyed our vegetables before we could reap them.”

The training provided them knowledge on how to wipe out vegetable pests and how to do vegetable farming in a scientific manner.

Thulimaya Gurung of Ghusel was also suffering from the same problem.

Her problem has also been solved after the training provided by the FWEAN.

Daily life of women in Ghusel has undergone changes thanks to the 18-week long training conducted by FWEAN in collaboration with District Agriculture Development Office, Lalitpur.

The objective of the raining was to provide knowledge on how to grow vegetables in a healthy way, protect beneficial insects and make vegetable farmers skilled,” said Shova Gyawali, General Secretary of the FWEAN.

She further said that the training was organized with a view to making rural women self-independent financially and improving their standard of living.

The FWEAN has already opened its branches in 21 districts in the country and will give continuity to its expansion in future to change the life of women through entrepreneurship.

“Before we took to this business, it was hard for us to run household expenses and pay school fee of our children,” said Sirjana Timalsina of Ghusel,” adding, “Now we can deposit few thousands in cooperatives even after meeting household expenses.”

Due to the training provided by FWEAN the income of rural women has now increased, informed Damodar Neupane, a trainer of District Agriculture Development.

The 18-week-long training that started on April 15 came to an end on Saturday.

The project has been funded by FINN Church Aid, Nepal and Women's Bank, Finland.