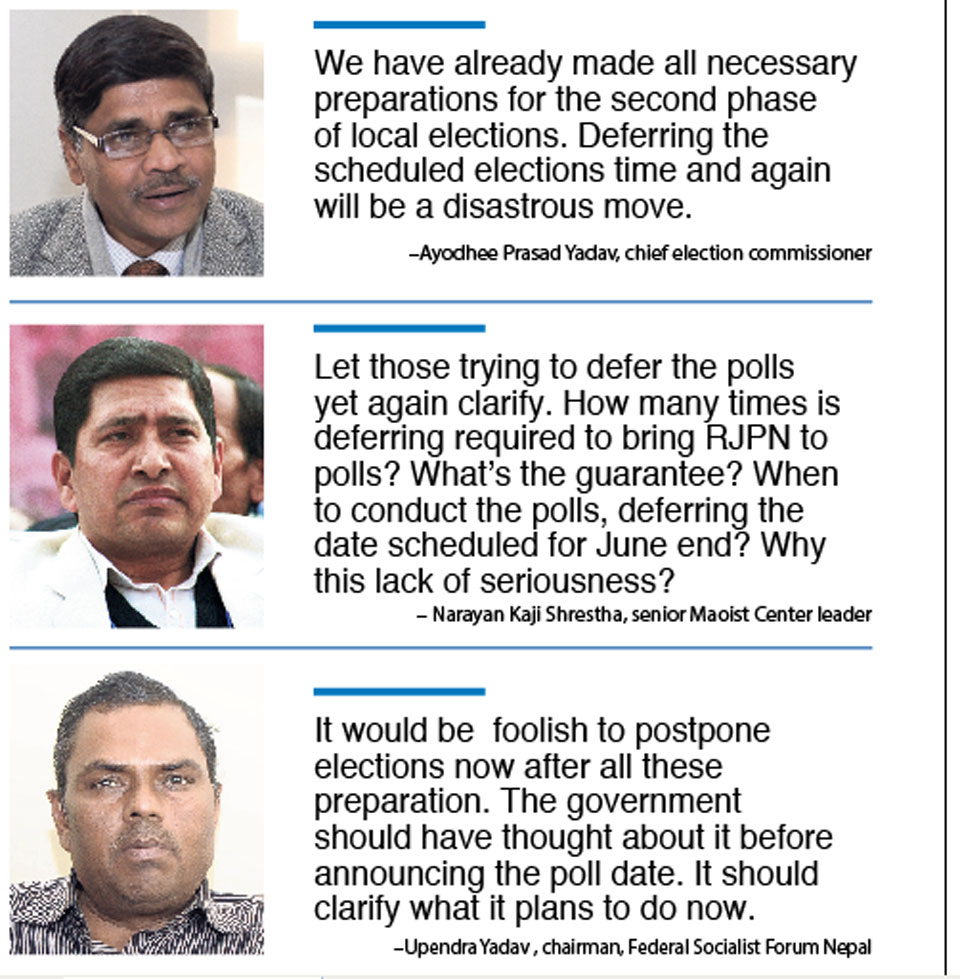 KATHMANDU, June 13: Arguing that it would be difficult to hold the second phase local elections without bringing the agitating Rastriya Janata Party Nepal (RJPN) on board, the government has indirectly proposed deferring the polls now scheduled for June 28.

During a meeting of top leaders of the major political parties held at Singha Durbar on Tuesday, ruling party top leaders circuitously proposed deferring the polls, citing various problems in holding the election if RJPN is not on board.

Emerging from the meeting, Chairman of main opposition CPN-UML, K P Sharma Oli, alleged that the ruling parties had indirectly proposed deferring the poll.  'They kept saying there were difficulties [in holding the poll]. But they did not speak directly. They did not do so even when I asked them,' said Oli.

'I am not clear whether they want to defer the polls or not hold them at all. It seems they are indirectly trying to either not hold the elections or defer them.'

Prime Minister Sher Bahadur Deuba, who is also president of the Nepali Congress (NC), had called a meeting to discuss  the polls in view of  anti-poll activities carried out by the RJPN in various plains districts. Deuba is under pressure from a section of NC leaders to defer the polls.

Senior leader of CPN (Maoist Center) Barsha Man Pun said they have decided to hold a meeting with the top RJPN leaders  on Wednesday to discuss their difficulties in joining the polls. 'If there is a written commitment from them to participate in the polls, top leaders of the major parties are positive about addressing their difficulties and discussing their agenda,' said Pun, while also claiming that Prime Minister Deuba was committed to holding the polls on the scheduled date.

Sources said the ruling parties have agreed to reciprocate with a written commitment to amend the constitution and increase the number of local units in tarai districts after the local polls if the agitating RJPN agrees in writing to participate in the polls.

The UML has also expressed flexibility toward such a proposal.

Sources said the ruling parties are even open to deferring the polls for a few days if RJPN decides to join the polls.

NC leader Ram Chandra Paudel, however, said that the meeting did not discuss about deferring the polls. 'We discussed how RJPN could be brought into the poll process on the scheduled date, but not deferring the poll,' he told media.

Earlier in the day, senior NC leaders had asked party President Deuba to defer the second phase local polls at least in provinces 2 and 5.

During a Work Performance Committee meeting held at party headquarters, Sanepa to finalize the party"s candidates for local polls, NC leader Ramesh Rijal suggested to Deuba to defer the polls as the agitating RJPN had started violent activities against the polls.

According to one leader present at the meeting, Rijal was joined by former home minister Bimalendra Nidhi. Nidhi argued that the local polls in provinces 2 and 5 should be put off for a few days in order to bring the agitating RJPN on board. He argued that there was no restriction on increasing the number of local units if due constitutional process was followed.

Nidhi suggested forming a constitutional commission to increase the number of local units in tarai districts and put off the polls in the two provinces until the increase is effected. Nidhi told the meeting that all NC district presidents in Tarai-Madhes districts had the same opinion.

KATHMANDU, Dec 14: As disputes over the number and delineation of local units under the federal setup are likely affect the... Read More...

KATHMANDU, May 31: The cabinet meeting on Wednesday morning has formally decided to hold the second phase of local level... Read More...

Ruling parties wrangle over minor issues as polls near

KATHMANDU, April 7: With just five weeks left before the local polls scheduled for May 14, the leaders of the ruling... Read More...

IN PICS: Bye Bye Kathmandu!
11 hours ago
Police drag Dr KC out of ambulance, forcibly take him to Trauma Center
12 hours ago