Shrestha, who is also a former foreign minister, said that PM Oli's meeting with Goel is detrimental to the country's independence, sovereignty and national interests.

"Such a meeting between the Prime Minister and the RAW chief in a clandestine manner is  detrimental to our national interests. The meeting is totally undiplomatic," he wrote on Facebook on Sunday.

Shrestha claimed this was the first ever incident in Nepal's political and diplomatic history in which a prime minister had met with an official of the foreign intelligence agency without having a scheduled agenda, and that looked like the formal talks between two counterparts.

Hours after landing in Kathmandu, Goel held the secret meeting with Prime Minister Oli on Wednesday night. It is said that the meeting lasted for three hours.

On Thursday, Prime Minister Oli came under fresh attack, including from three former Prime Ministers and his own party leaders, for meeting RAW chief Goel without keeping them in the loop. They have called the meeting “improper and objectionable”.

The leaders also asked Oli to provide the details of his meeting with the RAW chief. The Goel-led nine member team had flown to Kathmandu on a special flight.

The RAW chief’s visit came ahead of Indian Army chief General M M Naravane’s scheduled visit in November. Nepal Army sources said that Naravane will be paying an official visit to Nepal from November 4 to 6 at the invitation of his Nepali counterpart Purna Chandra Thapa. 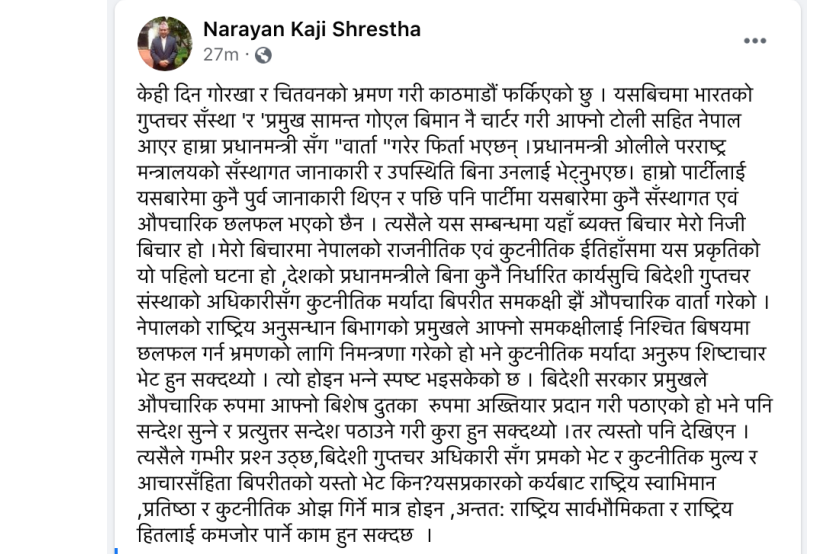