According to Surya Thapa, the prime minister's press advisor, the meeting will be revolving around the country's contemporary issues including the government's efforts to prevent and contain novel coronavirus, Nepal's border issues with India and the parliamentary ratification of US Millennium Challenge Compact (MCC).

During the meeting, Chairperson KP Sharma Oli and Executive Chairperson Pushpa Kamal Dahal will speak on the latest political situation of the country, Thapa said.

The party leaders are expected to forge the party's firm opinion on the MCC deal signed with the United States, according to a Standing Committee member. 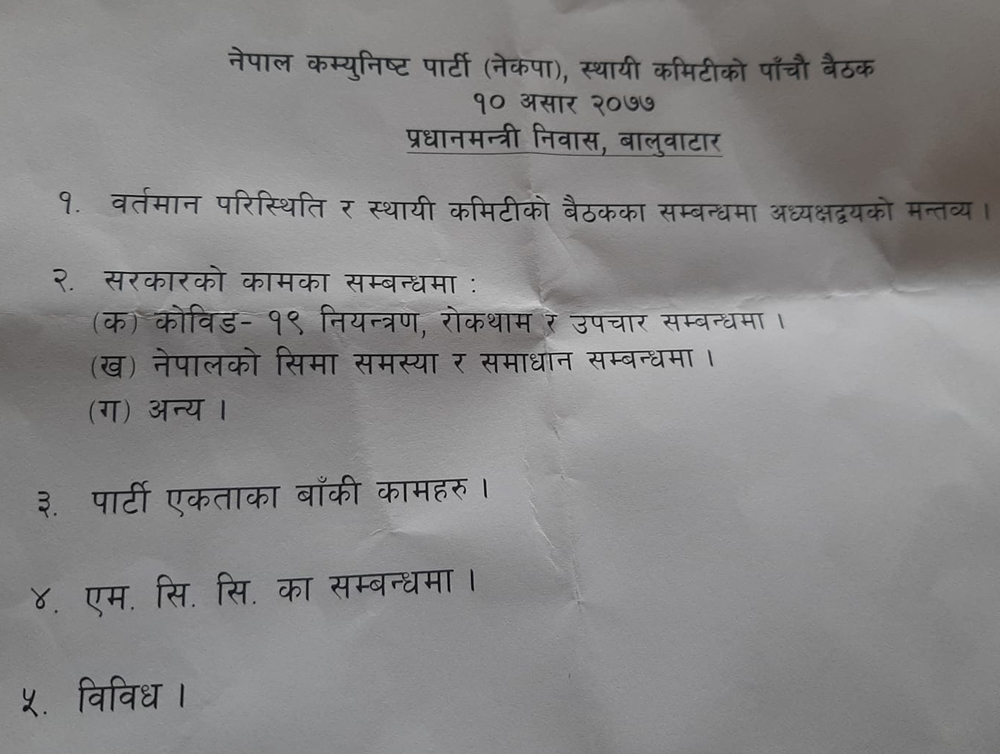 Those NCP leaders who are opposing the MCC Compact have primarily objected to its three provisions. The first is that the Compact will prevail over Nepal's existing laws in cases of conflicts. The second one is that Nepal has to take the Indian government's consent while building transmission lines within the Nepali territory. The third one is that Nepal's Auditor General will not be able to audit the accounts of the projects under MCC and only US audit firms will be allowed to do so.

Likewise, NCP leaders Khanal and Rawal have been insisting for a long time that the MCC should not be ratified through parliament as it is since this is an integral part of the Indo-Pacific Strategy pushed forward by the United States to counter China.

The implementation of the Millennium Challenge Corporation (MCC) projects has now become uncertain as the ruling NCP remains sharply divided on whether to endorse the MCC agreement through the parliament.

The crucial meeting of the ruling NCP comes at a time when the government is under fire from multiple quarters for its lackluster response to ongoing COVID-19 pandemic.

KATHMANDU, May 30: A Secretariat meeting of the ruling Nepal Communist Party (NCP) has decided to halt all activities being... Read More...