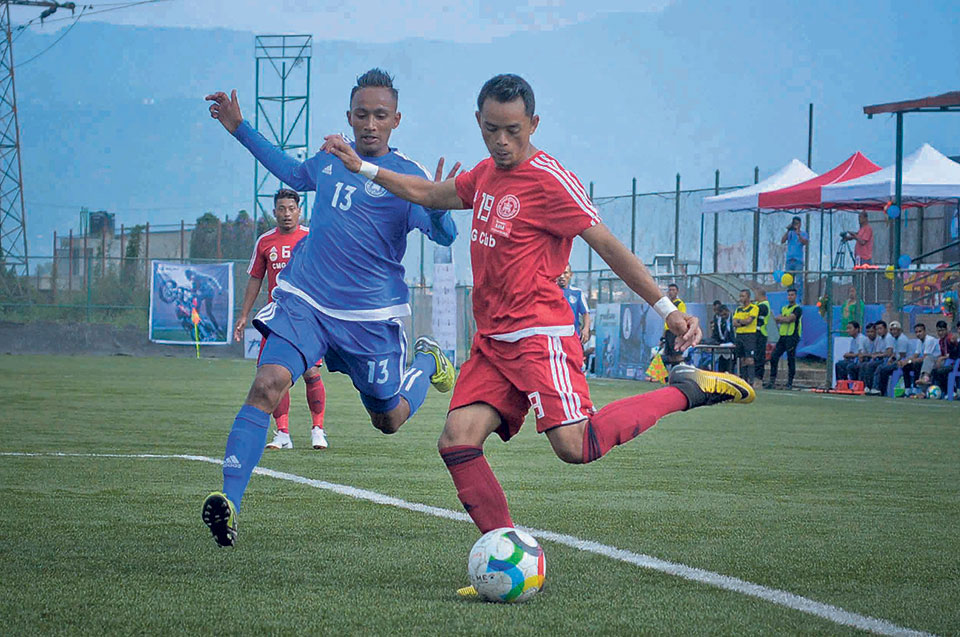 In the second league match of the season played at All Nepal Football Association (ANFA) Complex in Satdobato, Lalitpur, the game was destined to end in a goalless draw. Ruchal took advantage of a poor defending from Saraswati to slot the ball home from near the corner of the box.

Sankata’s Norbert Cedric Aba crossed the ball from the flank, but the Saraswati defense and goalkeeper Pradeep Bhandari failed to judge the height of the ball and fell to Ruchal, who scored from the outside of his boot into the right bottom corner in the last minute of the added time.

Earlier, both the teams had problems in the final third and failed to utilize some glorious chances. Sankata had its midfield to thank for a decent performance, but Saraswati was poor in the middle of the park as well.
Sankata controlled the possession of the game, but was pretty wasteful in the final third in the start of the game. Saraswati looked really unstable in the midfield as it struggled to retain the possession, and gave away the ball many times.

Aba started the game with his playmaking role, but his pass to the other foreign player Ellon Maxwell was not utilized properly as the Sankata number nine was poor in front of the goal.

Then, Sankata played passing football and also pressed hard to get the ball back, while Saraswati failed to move forward as its midfield looked pretty naïve every time it had the ball.

Saraswati got a chance after the first 10 minutes of the game as Tirtha Basnet dribbled past the entire Sankata defense, but did not get a shot and keeper Raja Babu Thapa was up for it.

Saraswati then upped its game near the half hour mark with passing football into the half spaces getting past the Sankata midfielders with ease, but again the balls in the final third were the problems for the team.
Sankata utilized its midfield superiority in the early period of the half hour mark with the first shot from Maxwell from inside the box being saved in the 25th minute, after Aba’s header being saved in the 22nd and Maxwell’s optimistic shot from a long range going over the bar in the 26th minute.

Saraswati then looked like scoring near the end of the first half as captain Dipesh Shrestha dribbled past the entire defense line of Sankata, got inside the box, passed the ball to Binod KC, whose shot was saved in the 44th minute. KC got a chance from the rebound, but keeper Thapa made a terrific save to deny him again.
The second half was lively as Sankata kept on pressurizing the Saraswati backling. The chances kept on coming with Bishnu Gurung’s shot from outside the box was saved in the 56th minute, followed by Maxwell’s header going over the bar nine minutes after that.

Likewise, Maxwell, who got the ball in the edge of the box, made a solid turn, passed to substitute Sandip Kunwar, whose shot was easily saved by the keeper in the 68th minute.

Then, Saraswati played passing football, got to the byline, and brought the ball to the middle with long passes in the area. Basnet got a chance with the play in the 68th minute, but his shot went over the bar.
Sankata’s Soujan Rai crossed the ball looking out for Maxwell, who in turn, could not get his head to the ball and the keeper made a fingertip save to it in the 89th minute.

After Sankata scored the winner in the third minute of added time, there was no way back for the fragile-looking Saraswati side that was beaten as the defense and the midfield looked not ready in terms of match fitness and decision-making.

Saraswati head coach Pradip Nepal said that he came to the match to win it, and that even though his side lost, he was okay with the performance.

“We came into the match to win, we also played possession-based football. The problem was that the attackers could not capitalize the chances. The fitness is not a problem for us. The strikers have to do better than this, but considering the league is taking place after five years, it is okay for now.’’

“It’s tough to play after a long time and it is the first game as well," Nepal added.

The selfishness of captain Shrestha was criticized throughout the game, even by his own teammates, but Nepal said that it was not a problem.

“He did it himself most of the times, he did not pass the ball, but it is alright.’’
Meanwhile, Sankata head coach Salyan Khadgi said that even though his team won, he was not satisfied with the performance of his team.

“We won, but I am not satisfied with the performance. I had expected my team to score more, but because of the attacking weakness, it was not good. We will improve this aspect in the next game," Khadgi said.
“Our midfield was good and that is the reason we won the match. I am very happy with Laxman’s performance. He has the experience and he always plays well," Khadgi added, "He missed a couple of chances earlier in the game, but he scored when he got that chance in the dying moment."

"It is always difficult to play the first match, and I opted to go with just a forward, so it was tough for us to settle the game earlier," Khadgi further said.

KATHMANDU, Jan 2: The Metropolitan Police Range, Kathmandu has started to rescue and rehabilitate children and elderly from the streets.... Read More...

KATHMANDU, Dec 7: Kathmandu's air quality is degrading day by day. As per the Valley Pollution Index on Thursday, the air... Read More...