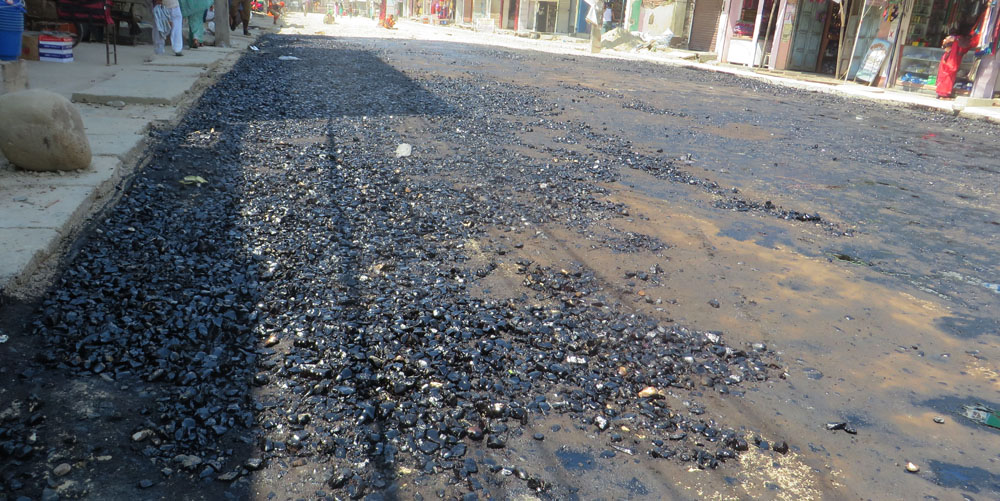 KATHMANDU, July 19: Kathmandu Valley Road Improvement Project (KVRIP) has been found releasing millions  to  contractors irrespective of the fact that work progress has been  zero percent  for years.

The government project has awarded  contracts to the firms and also released the budgets without removing structures obstructing  the road before the road expansion work started.

According to the latest progress report of the project, KVRIP has released Rs 112,410,000 to United Builders, Diwa/Sailung JV and Ashis/CM JV construction companies so far although their progress was nil.

KVRIP had awarded the tender to United Builders on September 30, 2015 for expanding the 3.6 km Chabahil-Jorpati road section . According to the contract, the contractor should complete the work by February 26, 2018. However the work progress of the contractor is nil so far, according to the project report obtained by Republica. The report  has mentioned that several houses along the road have yet to be demolished due to a demarcation row.

In another instance, Diwa/Sailung JV on June 8, 2016  won the bid to complete 2.3 km Dholahiti-Sunakothi-Chapagaun road expansion work by November 12, 2018. Irrespective of nil work progress, the company has received Rs 25.1 million out of the total contract amount of Rs 233.1 million.

Also, Ashis/CM JV on May 16, 2016  won the bid to complete the 7-km Jorpati-Sundarijal road expansion at Rs 547.8 million on May 16, 2016, to be completed by September 19, 2018. However, the company’s work progress is nil so far according to the KVRIP report. But the project has released Rs 48.2 million to the construction company irrespective of the zero percent progress report.

These are a few anecdotes of  contractors receiving money from the government agencies and not starting the work for years. Altogether 20 contracts have been made with various firms for 13 road expansion projects inside Kathmandu Valley. Though most of the tenders were awarded in 2015 only three contractors have completed over 30 percent work in two years. But, according to the KVRIP report, most of the contractors have been receiving more budgets as compared to their work progress.

With the government agencies not carrying out maintenance work on the tendered road sections since the past one year, the roads are in a sorry state.

“Due to flaws in our laws, contractors receive 10 percent payment of the total contract amount immediately after winning the contract and start another profitable business,” said a senior official at the Department of Roads requesting anonymity. He further claimed that even the government agencies concerned work in collusion with the contractors on such payments.

KVRIP chief Deepak KC defended the contractors stating that the delay in the work was due to the delay in demolishing the structures and houses along the road sections. “The reason behind nil progress is due to lack of working environment for the contractors as structures that have encroached the roads have yet to be cleared,” KC told Republica.

But officials of the road division questioned the intention of the KVRIP for awarding tenders without clearing the illegal structures along the road. But  project chief KC claimed that the project had awarded the tenders as per its work calendar. “It is legal for contractors to receive 10 percent payment within a month of contract award after submitting bank guarantees. But how can they  start work if the site is not cleared?” argued KC.

Clearing the boundary for roads has been delayed following land survey rows, protests by  local houseowners and sub judice cases.

KATHMANDU, June 1: Even after three weeks of the end of syndicate in public transportation by the government, the general... Read More...

There is no point in asking for resignation of Working Committee: CAN President Chand
38 minutes ago