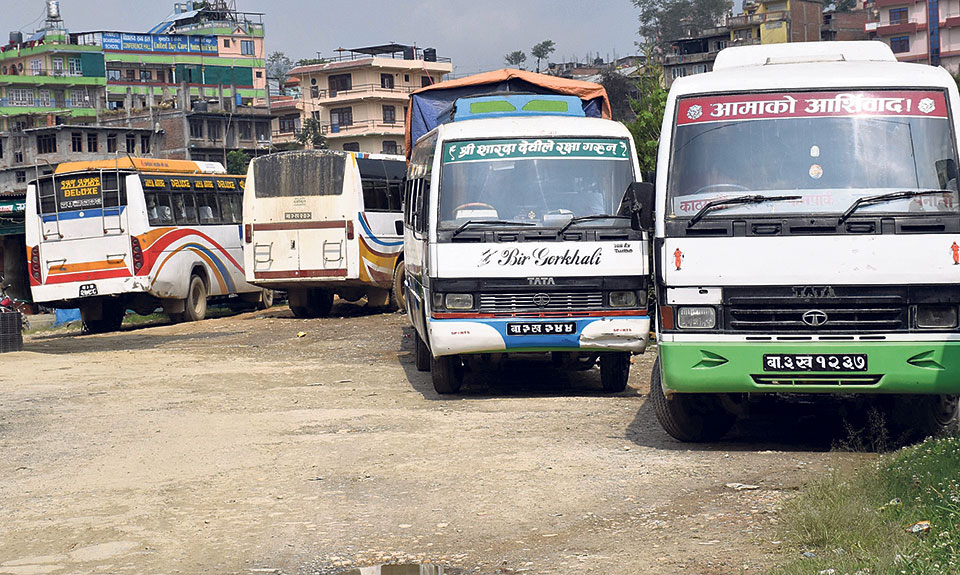 KATHMANDU, May 5: Public transport operators have invested over a trillion rupees [Rs 1,000 billion] in the industry but they have not been paying any taxes on their profits, according to government officials. All the public transport operators including bus operators and truckers in the country are registered with one or another "transport enterpreneurs committees", which operate as non-profit organizations.

As non-profits, these committees maintain income and expenditure accounts and their incomes are exempt from income tax although their members, the transport operators, have been earning huge profits.

This means all the fares the public vehicle users pay is pocketed by public bus operators as such earnings are still out of the tax net, according to tax officials and other government officials concerned.

The Federation of Nepali National Transport Entrepreneurs, which is protesting against the government decision to bring the transport operators under the Companies Act, has itself in a statement issued on Friday said that the total investment in the public transport sector is worth around Rs 1 trillion.

Former Secretary at the Ministry of Physical Infrastructure and Transport (MoPIT) Tulsi Situala said that public transport operators are evading income taxes by registering only with the committees. "Although they are running a profit-making transport business, these operators are paying only the 'vehicle tax', which is levied for vehicle ownership," added Sitaula. Director of the Department of Transport Management (DOTM) Tulsi Ram Aryal also confirmed that public bus operators are not paying income tax.

The 'vehicle tax' the public transport operators are paying once a year is very nominal compared to the private vehicles. Although the DOTM does not maintain seperate records of taxes collected from by public transport operators, the total amount of taxes collected from both public and private vehicles amounted to Rs 8.79 billion in the last fiscal year. The vehicle tax for public vehicles (black number plates) is Rs 3,000 for trucks and buses, Rs 2,400 for cars, vans, jeeps and microbuses, Rs 1,550 for three-wheelers, and Rs 1,000 for tractors [used for transportation].

"After paying the vehicle tax once year, the public transport operators can earn as much as they can and are enjoying tax free income. Probably this happens only in Nepal," said a tax official who is not allowed to talk to media.

Speaking at a parliamentary committee two years ago, the then MoPIT Secretary Arjun Karki had said that they (bus operators) make enough income by operating their vehicles for only a few days per month. "Such operators would go bankrupt in other countries but in Nepal, they are still making huge profits because they operate as cartels."

DoTM officials said bus imports have been increasing every year and this shows the industry is lucrative. Also, banks and financial institutions have been aggressively financing vehicle loans.

Due to the presence of cartel in the public transport sector, the public are deprived of quality services, the government is losing revenue and the cost of doing business has gone up markedly.

Government officials said the earnings generated from the public transport sector will come under the tax net for the first time if the transport operators are brought under the Companies Act. Only a few public transporters have been operating as companies since only recently and they have yet to hit the break-even point. So they also do not pay taxes.

$5 trillion question for Trump tax plan: How to pay for it?

WASHINGTON, Sept 28: How do you pay for an estimated $5.8 trillion tax cut? For President Donald Trump and Republican congressional leaders,... Read More...

KATHMANDU, Aug 17: The government, the political parties, bureaucrats and the private sector often point at each other for failing to... Read More...