KATHMANDU, March 20: Deputy Prime Minister and Minister for Federal Affairs, and Local Development and Rastriya Prajatantra Party (RPP) chairman Kamal Thapa, along with other party leaders, submitted the memorandum to the EC.

Prior to the submission, DPM Thapa joined the sit-in protest with other party leaders in front of EC office in Jamal. DPM Thapa reached the site after party leader Pashupati Shamsher Rana sustained injury to his knee during the clash between the party cadres and the police.

The party cadres clashed with police as the former moved toward the Office of the Election Commission, Jamal to stage a sit-in against the removal of the terms “Hindu State” and “constitutional monarchy” from its statute by the EC. Police had to fire five rounds of teargas shells to take the situation under control.

The RPP took out a rally in the Capital today demanding the restoration of the terms in the party statute.

The EC had removed the terms “Hindu State” and “constitutional monarchy” on March 17 from the statute of the RPP saying that they contradict the spirit of the constitution.

On March 18, the RPP had issued a press release condemning the removal of the terms from its statue.

Rastriya Janamorcha also issued a press release against the EC's decision yesterday, stating that the RPP has the right to advocate the constitutional monarchy and Hindu state. 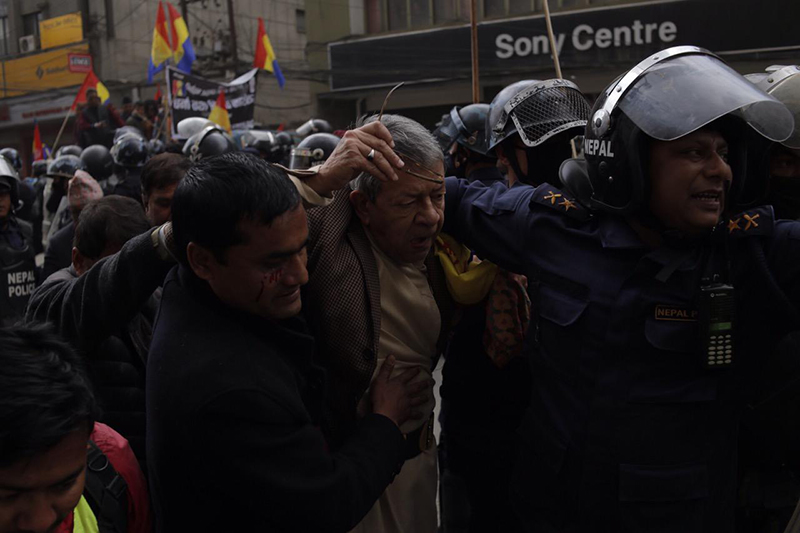 India and Nepal have decided to move ahead, says Indian External Affairs Minister
58 minutes ago